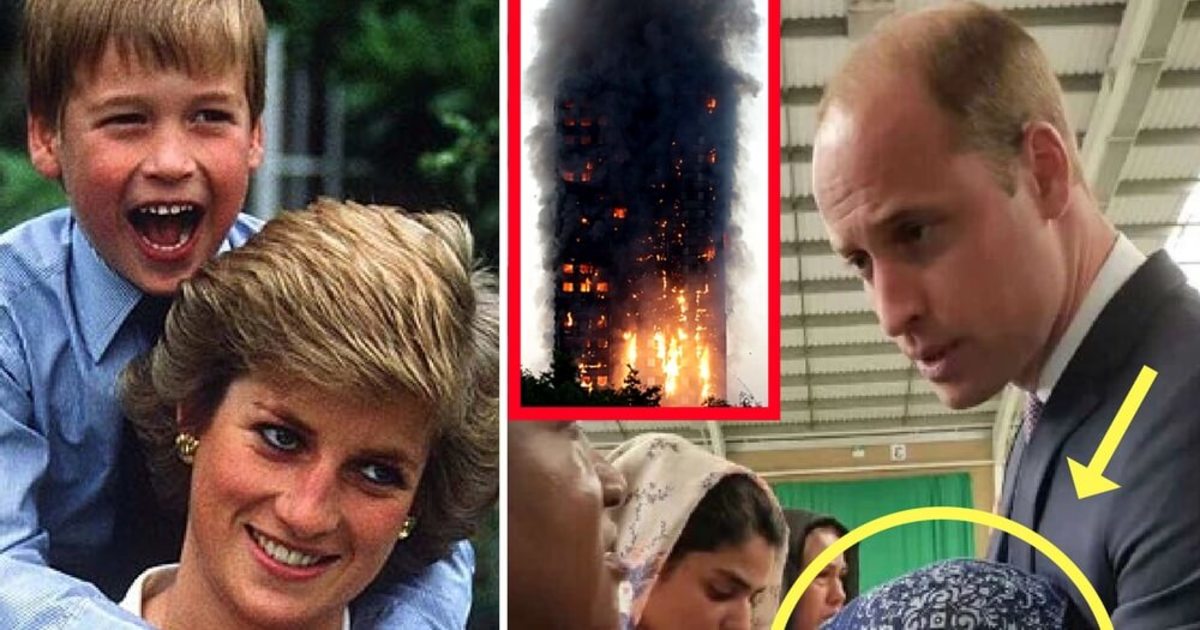 When Princess Diana passed away almost 20 years ago, she left a big void behind.

Despite the tragedy, both William and Harry have worked hard at keeping their mother’s legacy alive.

Earlier this summer, a picture that clearly demonstrated how much the boys have taken after their late mother spread like a wildfire.

The picture emerged online after the tragic Grenfell Tower fire in London in June 2017, which took the lives of 81 people and left countless others without a home.

Right after the tragedy, Prince William visited the people who had survived the fire, but lost their loved ones and homes.

It was a meeting that would have most likely moved Diana to tears.

Prince William’s mother, the late Princess Diana, was known for being a bit of a rebel within the royal family. She was not afraid of standing up for what she believed in regardless of what anyone thought of her.

There were numerous occasions in which Diana refused to follow the royal protocol of wearing gloves.

Diana, who many referred to as, ‘The People’s Princess”, because of her humane approach, was not afraid to hold or shake hands with non royals — she appreciated direct contact with those she met.

The best example of this is perhaps this infamous picture from 1991, when Diana visited Middlesex Hospital in London and shook hands with a patient who had AIDS.

At the time, there was a panic and fear of the AIDS virus worldwide. Princess Diana caused a controversy and broke barriers by one kind act. The picture would later became iconic of everything she represented.

It seems Prince William inherited a lot of his mother’s empathy and her ability to make exceptions to royal protocol at the right moments.

In June, Prince William and his grandmother Queen Elizabeth II unexpectedly visited the crisis area which had been set up for the survivors of the horrific fire of Grenfell Tower, a high-rise building in the center of London.

The queen and prince spent time and spoke to both volunteers and victims. They showed their support to those whose lives had taken a devastating turn because of everything they had lost.

In an unbelievably kind and touching gesture, Prince William hugged a devastated woman who had lost her husband in the fire.

The lady he hugged was Fatima Jafari. She’d described for the prince how her husband Ali Yawar Jafari had been in the elevator when the fire broke out. She hadn’t seen him since.

The woman, clearly distressed with tears pouring, affected Prince William and so he did what his mother would have done — he broke royal protocol.

According to tradition, members of the royal family should not engage in any physical contact with non-royals.

Regardless of the rules, the future king was well aware that this was not the occasion for just a formal handshake. The moment required more than that.

And so he hugged the poor lady and comforted her right then and there.

Jafari was extremely moved by Prince William’s gesture.  According to Liftable, a witness recalls the woman saying, “I am nobody, but the Queen and future King of this country came to see me. They really care.”

Prince William has really grown to become a symbol of hope in today’s Great Britain.

Diana’s actions were clear reminders of how important it is to be nice to one another. Her son is now carrying the torch of that very message.

I am certain that if Princess Diana were alive today she would be so proud to see what fine young men her sons have grown up to be.

She’s surely up there in heaven happily watching her boys are following their mother’s footsteps — please like and share if you agree!