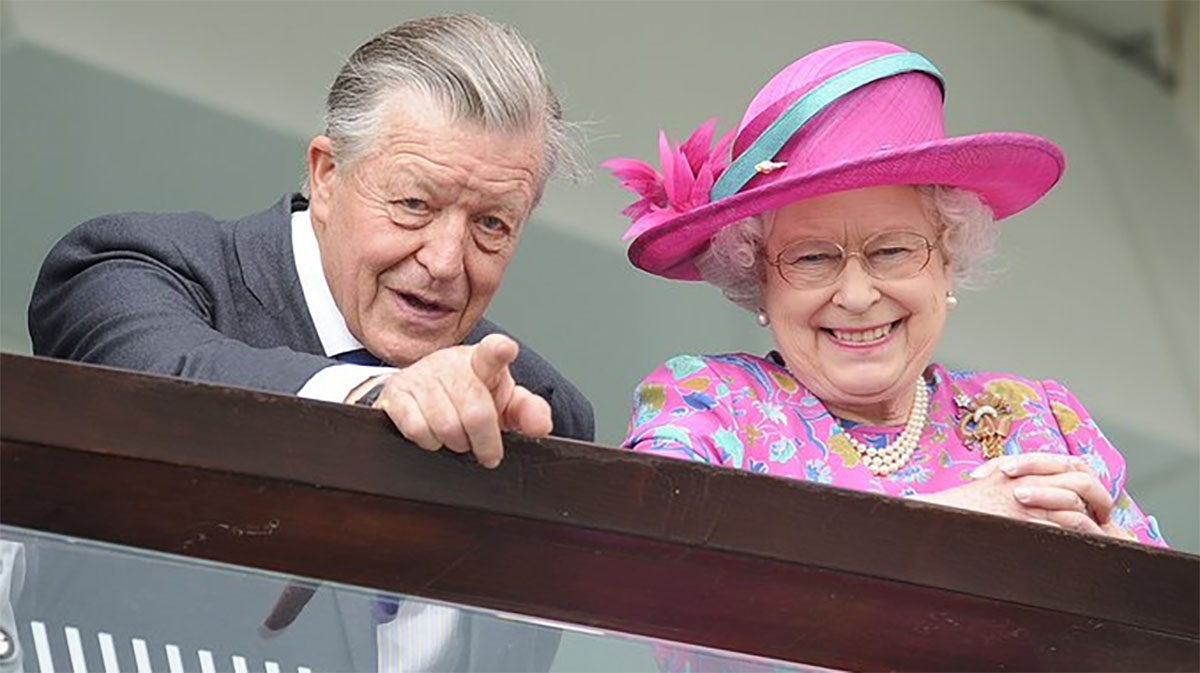 Sir Michael Oswald was 86 years old when he died on Saturday and as a trusted horse racing adviser to the Queen for decades his death added to the Queen’s heartbreak.

Sir Oswald had served as racing manager to the Queen Mother from 1970 until her death in 2002, after which he went on to advise the Queen on races.

The Queen is well known for her love of horse racing and is one of Britain’s biggest thoroughbred owners and breeders.

“Every day of her life, she follows racing one way or another when she can…When she watches the racing, she’s fully up to date with the horses’ backgrounds, who trains them, who’s riding them and a lot about the horses and the way they’re bred because that’s her great passion, the breeding.”

Warren also revealed to the Express newspaper that she even watches some of the foals being born.

Warren paid tribute to Sir Oswald saying: “Sir Michael did a magnificent job managing the Royal Studs for so long. He was deeply committed to the studs, the Queen and the Queen Mother. He was extraordinarily enthusiastic and got such a buzz out of all the royal winners.”

It’s thought that Prince Philip did not share his wife’s passion for horse racing but being the dutiful husband he was he attended horse racing events with the Queen.

Prince Philip passed away on Friday morning aged 99, just two months before his 100th birthday. As the longest serving British consort, or companion to the sovereign, he and the Queen had been married for 73 years and have four children.

After a meeting with the then Prince Philip of Greece and Denmark at the Royal Naval College in Dartmouth in July 1939, Elizabeth—though only 13 years old—said she fell in love with Philip, and they began to exchange letters.

We can only imagine how heartbroken she must be losing not only the love of her life and father of her children but the one person she could be herself around. She cut a lonely figure at the Prince’s funeral sitting alone with her head bent throughout the service.

Due to Covid restrictions in the U.K. the Queen was forced to sit apart from her family at a time when she needed them most.

But as the world shared the heartbreaking image of her solo at her husband’s funeral we were unaware that her trusted companion had also passed away.

Sir Michael Oswald had dutifully served Queen Elizabeth and the Queen Mother since 1970 when he stepped into the role of manager of the Royal Studs for the Queen Mother. He remained in that position for 28 years.

Sir Oswald’s wife Lady Angela, who served the Queen Mother as her lady-in-waiting, said her husband was fortunate enough to be able to do what he loved for a living.

“He always said he had the most wonderful job anybody could ever have had and that for all his working life he was simply doing what he would have done had he been a rich man who didn’t have to work,” she told the Racing Post.

After leaving his role as a racing advisor in 2002, Sir Oswald became the Queen’s jumps adviser.

Oswald’s death was announced on Saturday, the same day that Prince Philip was laid to rest.

Horse riding has always played a huge part in the royal family with the Queen riding horses by the age of three and her husband and son avid polo players.

Queen Elizabeth and Prince Philip’s only daughter, Princess Anne, made history when she was the first royal to become an Olympic athlete. She competed in the 1976 Games in Montreal, riding on the Queen’s horse Goodwill.

Princess Anne’s daughter Zara Tindall continued the family tradition of horse riding and went on to compete in the 2012 London Olympics winning a silver medal which was presented to her by her mother.

It was Sir Oswald who was the guiding force and trusted advisor to the royal family who are united in their passion for horses. Rest in peace.

Such huge losses for the 94-year-old monarch to bear but she has the support of her very large and loving family and I hope she also takes comfort in the animals that she surrounds herself with.