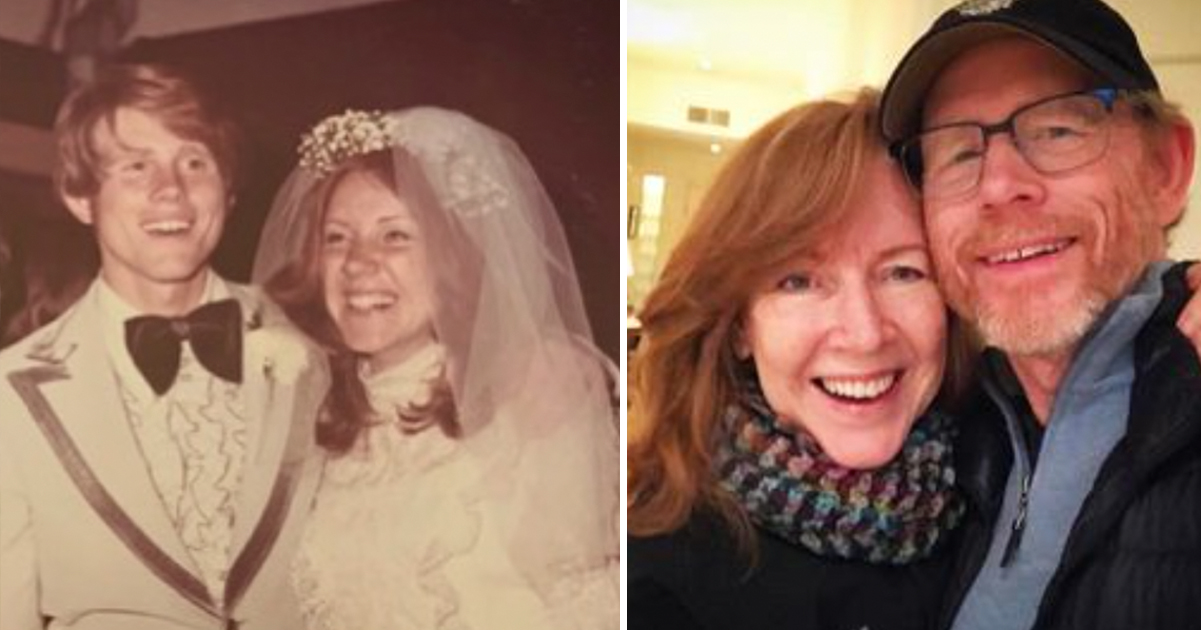 When it comes to A-list celebrities, it appears there are all too few who are genuinely good human beings.

Admittedly it can’t be easy being in the spotlight each and every day. I can’t imagine my life being simple if I was hounded by paparazzi and people who wanted a piece of me constantly.

With that in mind, it’s no wonder that certain celebrities can come across as cold or rude individuals. Of course, they’re not all like that; some have built a reputation for being extremely tolerant, likable individuals despite the stresses of their everyday lives.

One such figure is beloved actor-turned-director Ron Howard, who first burst onto TV screens in the iconic “The Andy Griffith Show”. Over the years, he’s certainly proven himself to be one of the good guys, and of that rare breed of Hollywood star without a scandal to their name.

No, Howard seems to be about as down-to-earth as they come, and his almost five-decade-long romance with wife Cheryl – who he met in high school – is perhaps evidence of that.

Here, we take a closer look at Ron Howard, and just how his marriage has survived where so many others have failed …

Ron Howard became a star following his portrayal of “Opie” on The Andy Griffith Show at age five. He continued his career in Hollywood by starring in Happy Days, becoming a very-well respected actor, as well as director.

Outside of the Hollywood spotlight, Howard is now celebrating 47 years of marriage to his wife, Cheryl Howard. Cheryl and Ron met way back. It’s been more than 50 years since their first date – and still to this day, they are deeply in love.

Born on March 1, 1954 in Duncan, Oklahoma, Ron Howard was a part of a very creative and theatrical family. His mother Jean was an actress, and his father, Rance, an actor and director.

At 18 months of age, Ron appeared in his first movie, Frontier Woman. At age two, he made his stage debut in a production of The Seven Year Itch, and before long, jobs offers were pouring in.

Howard starred in several television shows as a child. After appearing in the CBS series Playhouse 90 in 1959, a producer named Sheldon Leonard saw his obvious talent. He went on to cast Ron Howard as “Opie” in his new series, The Andy Griffith Show, thus changing Howard’s life forever.

The TV series and the inhabitants of the fictional town of Mayberry became hugely popular for the way they maintained the strict, moral code of the 1950s and 1960s.

It remained a household favorite for eight years. Still to this day, the legendary show remains a fan favorite.

Not only did Ron Howard love doing The Andy Griffith Show, but it also proved just how good of an actor he was.

Elinor Donahue – who starred as pharmacist Ellie Walker for 12 episodes – recalled working with Ron Howard, namely how impressed she was by him.

“Ron Howard was the best child actor I had worked with,” Donahue said. “He just had something.”

“He always knew his lines. He knew your lines as well,” she added. “Not the least bit bratty or ‘know-it-all’ or anything,” said Donahue. “A very nice boy.”

One might think that Ron would have been quite the popular kid at school following his great success on The Andy Griffith Show. Sadly, the reality was something else entirely.

In his 2012 biography, Howard revealed that he was embarrassed talking about the fact that he was a child actor.

“Among my peers, I was embarrassed to be an actor,” Howard recalled. “It was not something to be talked about.

As it turned out, The Andy Griffith Show was just the beginning for Ron Howard. He continued to act, but would eventually fall in love with directing.

“I was an actor who dreamed of being a director,” he said.

Today, Howard is 68, and besides having a wonderful and very successful career, he’s also a loving father and husband.

Put simply, the romance shared by Ron Howard and his wife Cheryl is nothing short of incredible.

From the first moment they saw each other, they had an instant connection. Howard explained himself: “There was never anybody else.”

“We went to see a re-release of Stanley Kramer’s It’s a Mad Mad Mad World and then got some pizza at now defunct Barnone’s in Toluca Lake. Quite a start, right?”

Many things happen during the high school years. People start to pursue different dreams and head to college, and thus retaining a relationship can be really hard.

For Ron and Cheryl, it wasn’t an obstacle at all, though. Instead, they stood by each others’ side all through their teenage years and for many years to come.

Cheryl’s parents even tried to stop the budding lovebirds from moving too fast, once telling Howard that he was only allowed to take their daughter out twice a week, no more.

Howard, however, had other plans. As per the biography “Ron Howard: From Mayberry to the Moon…and Beyond”, written by Beverly Gray, Howard joined the Burroughs high school cross country team so that he could go for a jog every morning (these jogs more often than not ended at Cheryl’s house).

The pair would eventually marry in 1975. As we all know, their love is still going strong now, almost 47 years later!

In 1981, the couple welcomed their eldest daughter, Bryce, and four years later, twin daughters Jocelyn and Paige arrived. In 1987, they welcomed a son, Reed.

Howard himself has previously admitted to being surprised that his marriage to Cheryl has lasted as long as it has.

Speaking to the HuffPost, the director said:

He told Closer Weekly, meanwhile: “[Cheryl] has made so many good things possible and so many difficult things manageable. I’m forever grateful.”

What’s more, it would appear that Cheryl helps support a superstition her famous husband has – and one that he has continued with ever since high school.

As per reports, Howard has made a point of putting his wife in every single movie he has ever directed, beginning way back when he was in high school.

The 68-year-old told Today that having Cheryl make an appearance in every film was his only superstition, adding that he once cut her from a scene, only to greenscreen her back in later.

I don’t know about you, but I’m a big fan of Ron Howard and virtually all of his work.

It’s so nice to see a romance like Ron and Cheryl’s. Proof, if we needed it, that true love still exists in the world.