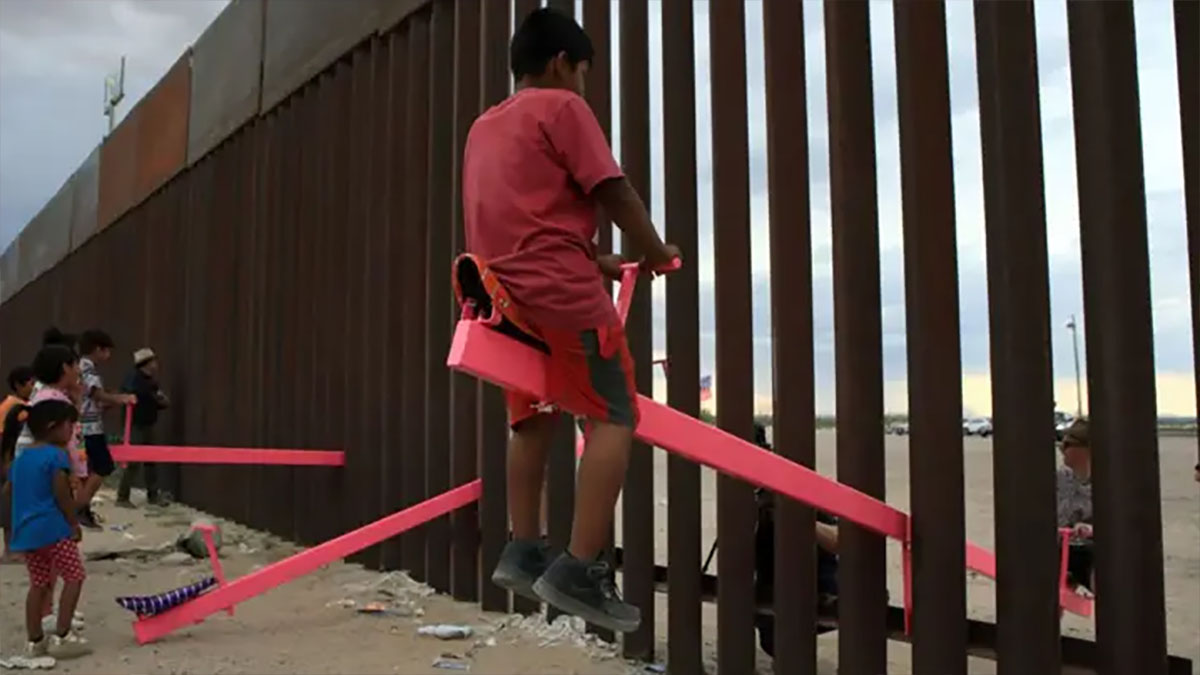 It was one of the main focuses of Trump’s first and only term as president – the USA-Mexico border wall.

Two people’s response to the building of this border wall was to install a series of pink teeter-totters or seesaws across the wall where children on both sides of the border could play together.

The installation remained in place for 40 minutes in July 2019, and the event was described at the time as being “filled with joy, excitement and togetherness at the border wall”.

The Teeter-Totter Wall caught the attention of the art world and has now won the Design of the Year award.

Designed by architects Ronald Rael and Virginia San Fratello the interactive installation allows children from both sides of the border to play with one another bringing kids from El Paso in Texas on the U.S. side and from the Anapra community in Juarez in Mexico together.

Speaking to DesignBoom in 2019, architect and anti-border wall campaigner Ronald Rael said: “The wall became a literal fulcrum for US-Mexico relations and children and adults were connected in meaningful ways on both sides with the recognition that the actions that take place on one side have a direct consequence on the other side.”

Virginia San Fratello, an associate professor of design at San José State University, who designed the pink play objects with Rael who is also a professor of architecture at the University of California, Berkeley, said she wanted to encourage dialogue rather than division.

“I think it’s become increasingly clear with the recent events in our country that we don’t need to build walls we need to build bridges,” she added.

Their creation has been awarded the 2020 Beazley Design of the Year award organized by London’s Design Museum.

“It remains an inventive and poignant reminder of how human beings can transcend the forces that seek to divide us.”

In his final months in office, Donald Trump has ramped up construction on the 576-mile border wall which has cost $11 billion making it the most expensive wall of its kind in the world, as per NPR News.

Migrant deaths have increased since the border wall was built with 2019 seeing more than 800 deaths, making it one of deadliest years on record, the UN migration agency said.

I love this design and think it should have stayed as a stark reminder that walls don’t work.

Congratulations to the team behind this awe-inspiring design.

Share this story so more people can see the joy this design brought to so many children in just a short period of time.