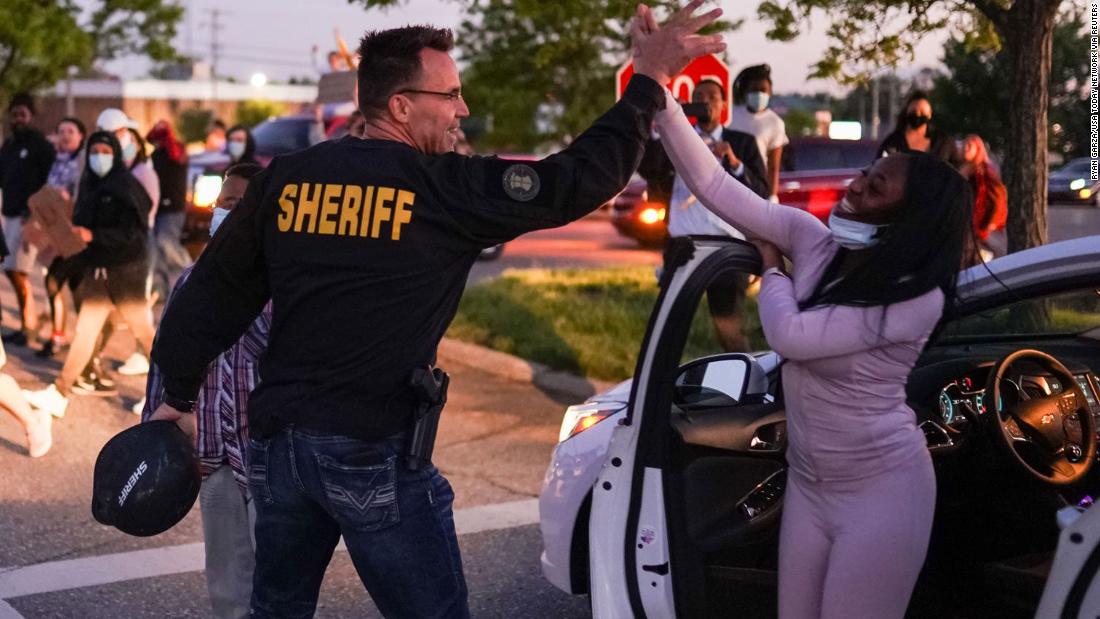 A Michigan sheriff joined protesters in Flint Township at the weekend, laying down his weapon and telling those gathered that he wanted a parade, not a protest.

As per CNN, Genesee County Sheriff Chris Swanson reassured demonstrators gathered on Saturday to protest the death of George Floyd, that he and the other officers in riot gear were there to ensure the public had a voice.

In a video uploaded to Twitter, Swanson can be heard saying: “The only reason we’re here is to make sure that you got a voice — that’s it. These cops love you — that cop over there hugs people.”

After trading words and high-fives, the crowd began to chant “walk with us”. So Sheriff Swanson did just that.

Tensions are running high right now all over the U.S. as a result of George Floyd’s death.

Described as a “gentle giant” by his family, Floyd passed away after being pinned to the ground by three officers in Minneapolis, despite being in handcuffs. One of those officers, Derek Chauvin, was seen on camera kneeling on his neck. Chauvin has since been charged with murder.

“On Friday Swanson addressed George Floyd’s death via a Facebook post.”I join with the chorus of citizens and law enforcement officials alike, calling for the swift arrest and prosecution of each police officer involved in this appalling crime.

“The actions we witnessed on that video destroy countless efforts to bolster community policing efforts across our nation, and erode trust that is painstakingly built.”

Following the video of Sheriff Swanson talking to demonstrators, as well as laying down his baton and walking with them, people took to social media to praise his actions.

Protesting without causing violence is the obvious route most are backing, though frustrations aimed at President Donald Trump’s government and the numerous cases of recent police brutality will not be forgotten.

Share this article if you think Sheriff Swanson did a terrific job, and that America needs more police officers like him!