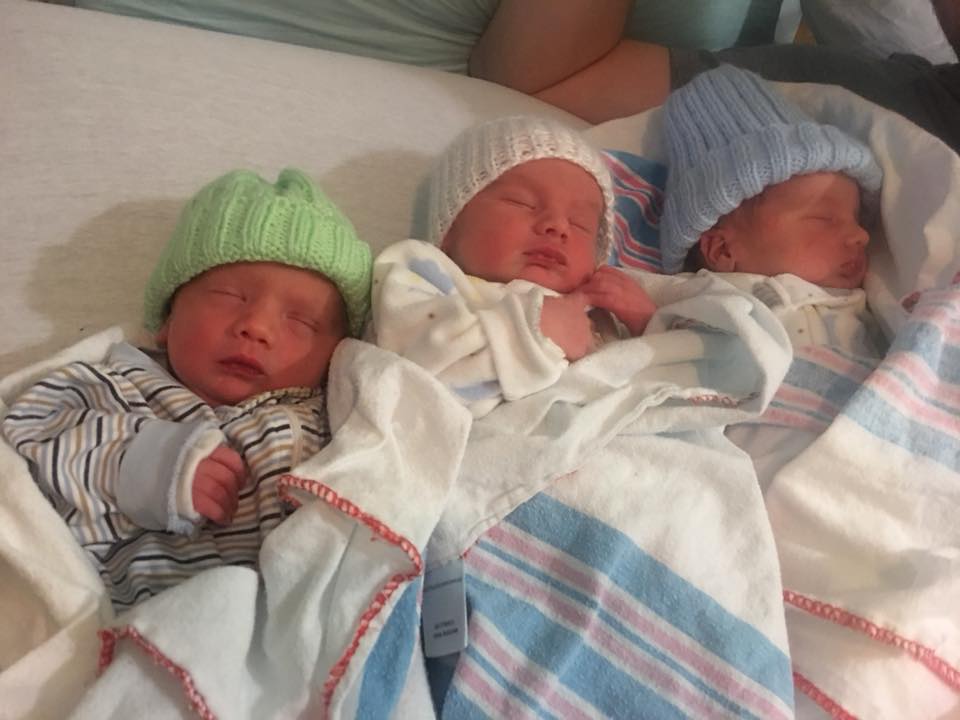 Ask any single mother or father in the world and they’ll tell you how daunting it is to raise a child entirely on your own.

However, for 25-year-old Hayley Arsenault, “daunting” might not be the appropriate word – she couldn’t have been more excited when she fell pregnant.

That was until she discovered she was carrying not one but three children!

As you can probably imagine, it’s a time-consuming task to look after a child… but triplets?

Hayley was close to despairing and so went online to ask for help. The response she got was hardly what she had prepared for…

After Haley gave birth to boys Hogan, Rylan and Finn, her days were filled with a infinitely turning wheel consisting of breastfeeding, diaper changing, bathing and cleaning.

Haley’s mom was able to help her for a short time in the beginning, but the babies’ grandma lived far away and eventually had to return home.

The ladies wanted to give Hayley three extra sets of hands; three times the grandmas and incredible peace of mind for the young mom.

Jenny MacDougall, Alice Mokler and Anita Arsenault (who is not related to Hayley) are all sisters, and they know how difficult it is to raise a young baby… let alone three.

Jenny told CBC: “Knowing what it’s like to have one baby, it’s a lot of work. When I heard that she had three, I could really understand how exhausting it must be.”

'It takes a village': 3 grandmothers help exhausted mom care for triplets. Read the story at https://t.co/ocCfIQNxAS via @CBCNews pic.twitter.com/L6LQTIq4s2

Of course, some may be familiar with the old saying “it takes a village to raise a child”.

In the earlier days of civilization, when people more often than not grew up in villages, ones family was more than just their mom, dad and siblings. The whole village was expected to create a safe environment for the children to grow up in.

It turns out such an ethos still exists in today’s world. Fortunately, Hayley lives within a society where this rings true.

Although the town of Tignish, Prince Edward Island, Canada, only has 800 inhabitants, Hayley was able to get a great response after her call for help.

These three wonderful sisters showed the qualities of solidarity and helpfulness at their most triumphant – they really wanted to take care of these three amazing kids!

Now there is effectively a grandma for each boy, meaning they all get the attention and care they need.

Jenny, Alice and Anita also help with household chores and take care of the babies so that Hayley can have a rest from time to time. On top of that, their volunteer work also gives the sisters the chance to spend time with one another. These lucky ladies simply can’t get enough of the joy the children bring.

Wendy and Billy Arsenault, the triplets’ biological grandparents, also contribute with the help. Billy claims the group change about 250 diapers a week, which says something about the magnitude of the job. He admits he doesn’t know what the family would have done without the help from Jenny, Alice and Anita.

“It’s tiresome as it is, but it would be very tiresome. Everybody’s been great,” he told CBC.

Meanwhile, Hayley has only praise for her three wise women.

“To have strangers come in and actually make a connection with your babies is pretty amazing,” she said. “They become people that you know and trust and that’s the big thing.”

These three amazing ladies have proven that grandmas can make an incredible difference. As they continue to weave their magic into Hayley’s life, they do more than anyone could have imagined.

Without these women, Hayley would have been stumped.