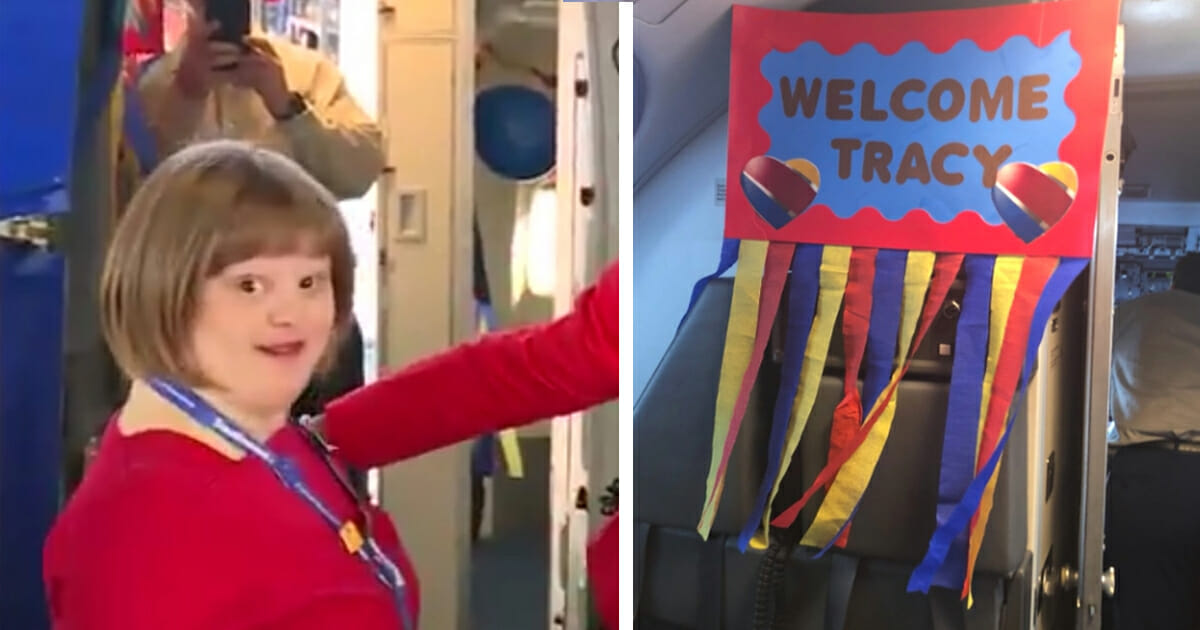 With so much hate and terror in today’s world, we can never get enough examples of shining human compassion.

Which is why it’s great to stumble upon stories like that of Vicki Heath and Tracy Sharp, who met on a flight to Houston a few months back.

Sharp, from Sacramento, California, has Down syndrome, and whilst flying home after visiting family she confided in Heath that her lifelong dream was to also become a flight attendant, as Heath was.

Of course, it would have been easy for Heath to smile and nod; to forget Sharp’s comment out of hand and get on with her job, her duties, her life. She didn’t though.

No, Heath took matters into her own hands, a decision that had some truly fantastic consequences.

As per KVOR, after hearing about Sharp’s dream Heath decided to put the wheels in motion.

She made some phone calls, talked to Southwest staff and obtained permission to bring Sharp aboard a flight as a Southwest flight attendant of sorts.

WATCH: Here's the moment where Tracy met Vicki on her dream flight as a @SouthwestAir flight attendant https://t.co/ANF0g8xYxP pic.twitter.com/wkqZTEzCvP

After some negotiations, Heath got the sign off she needed, allowing Sharp to come aboard a flight from Sacramento to Seattle, Washington as part of the team.

Sharp was able to live out her dream, dressing in a red Southwest uniform and assisting Heath as she went about her duties. These included checking up on passengers, which put a huge smile on Sharp’s face.

As per KVOR, Heath said: “We met on the airplane, and look at that smile, OK.”

Then, after being asked how she felt about making Sharp’s dream come true, she replied: “Oh, you’re going to make me cry. I feel like I’m living my purpose driven life, and that’s huge.”

.@SouthwestAir Flight 2202. Never have experienced a more heartwarming flight. Southwest flight attendant coordinated for my flight to decorate the whole plane for a young girl with down syndrome who had always wanted to be a stewardess. Good Luck Tracy! pic.twitter.com/kpdYex6Q04

To make the gesture even more special, both of Sharp’s parents were aboard to see their daughter in action. Sharp was even able to serve them champagne on their anniversary day.

When the flight touched down, the passengers erupted in applause for Sharp and her great service.

Of course, none of it would have been possible without the initiative shown by Heath, for which we’re sure Sharp is eternally grateful.

What a heartwarming story, if only more people were willing to go that extra mile as Vicki Heath did!

It certainly looks like Sharp was happy to be able to act out her dream day as a flight attendant. If this article put a smile on your face, share it to show your support for those people living with disabilities.