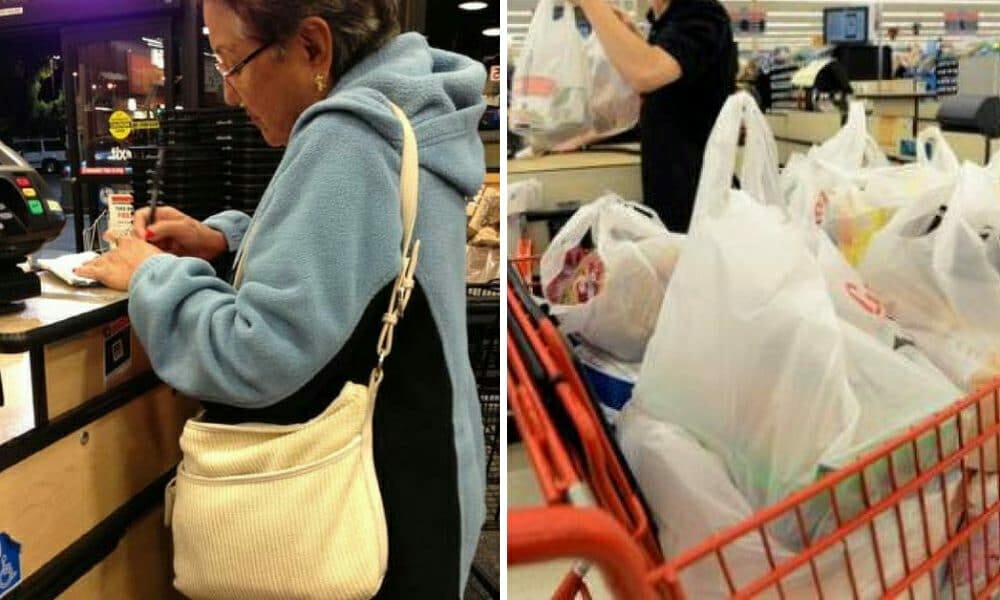 The older generations in society contributed so much during their days. They’ve lived in many different periods and, of course, have a good understanding of how things have changed over time. A bi-product of this is that they have invaluable life experience over young people.

Unfortunately, this isn’t always a fact that’s respected. Young people can sometimes think they know better than their elders, without thinking much about it. This was exactly what happened when an old woman shuffled her way to a cashier at a super market. Their subsequent conversation has gone viral, being shared on Facebook over 1.5 million times – it’s not really difficult to see why.

It’s unclear as to whether this is an entirely fictional story, or whether its roots have been lost in the foggy doldrums of Facebook. For me, where it originated isn’t as important as the content.

In any case, it begins with an old woman approaching the woman who would be packing her bags. The cashier urged the woman to bring her own bags to the store because “plastic bags aren’t good for the environment”.

The older woman apologised and tried to explain: ‘We didn’t have this ‘green thing’ back in my earlier days.’

Instead of accepting this response, the cashier pushed on: ‘That’s our problem today. Your generation did not care enough to save our environment for future generations.’

It was then that the old woman reacted with surprise. Her reply is something everyone should read and understand.

The old woman decided she wasn’t going to take anymore, and said:

‘Back then, we returned milk bottles, soda bottles and beer bottles to the store. The store sent them back to the plant to be washed and sterilized and refilled, so it could use the same bottles over and over. So they really were recycled. But we didn’t have the “green thing” back in our day.’

She continued: ‘Grocery stores bagged our groceries in brown paper bags that we reused for numerous things. Most memorable besides household garbage bags was the use of brown paper bags as book covers for our school books. This was to ensure that public property (the books provided for our use by the school) was not defaced by our scribblings. Then we were able to personalize our books on the brown paper bags. But, too bad we didn’t do the “green thing” back then.’

The cashier recoiled, but the old lady carried on talking.

‘Back then we had one TV, or radio, in the house — not a TV in every room. And the TV had a small screen the size of a handkerchief (remember them?), not a screen the size of the state of Montana. In the kitchen we blended and stirred by hand because we didn’t have electric machines to do everything for us. When we packaged a fragile item to send in the mail, we used wadded up old newspapers to cushion it, not Styrofoam or plastic bubble wrap. Back then, we didn’t fire up an engine and burn gasoline just to cut the lawn. We used a push mower that ran on human power. We exercised by working so we didn’t need to go to a health club to run on treadmills that operate on electricity. But you’re right; we didn’t have the “green thing” back then.’ At this point, another cashier had opened a queue in another lane. The old woman wasn’t done yet, though.

She pushed on: ‘Back then we washed the baby’s diapers because we didn’t have the throw away kind. We dried clothes on a line, not in an energy-gobbling machine burning up 220 volts. Wind and solar power really did dry our clothes back in our early days. Kids got hand-me-down clothes from their brothers or sisters, not always brand-new clothing.’

‘Back then, people took the streetcar or a bus and kids rode their bikes to school or walked instead of turning their moms into a 24-hour taxi service in the family’s $45,000 SUV or van, which cost what a whole house did before the “green thing”.’

Then the old lady finally reached her crescendo:

‘Isn’t it sad the current generation laments how wasteful we old folks were just because we didn’t have the “green thing” back then?’

Naturally, the cashier was lost for words. The older lady packed her own goods and left the store. I’m sure the young clerk will think twice before she goes on the front foot with the older generation regarding environmental awareness. Younger people often think they know best, and, while sometimes that may be the case, it’s always important to listen to the older people in society who have seen and done things their younger counterparts haven’t.

Please share this story if you agree and thought that the older woman had a perfect response!