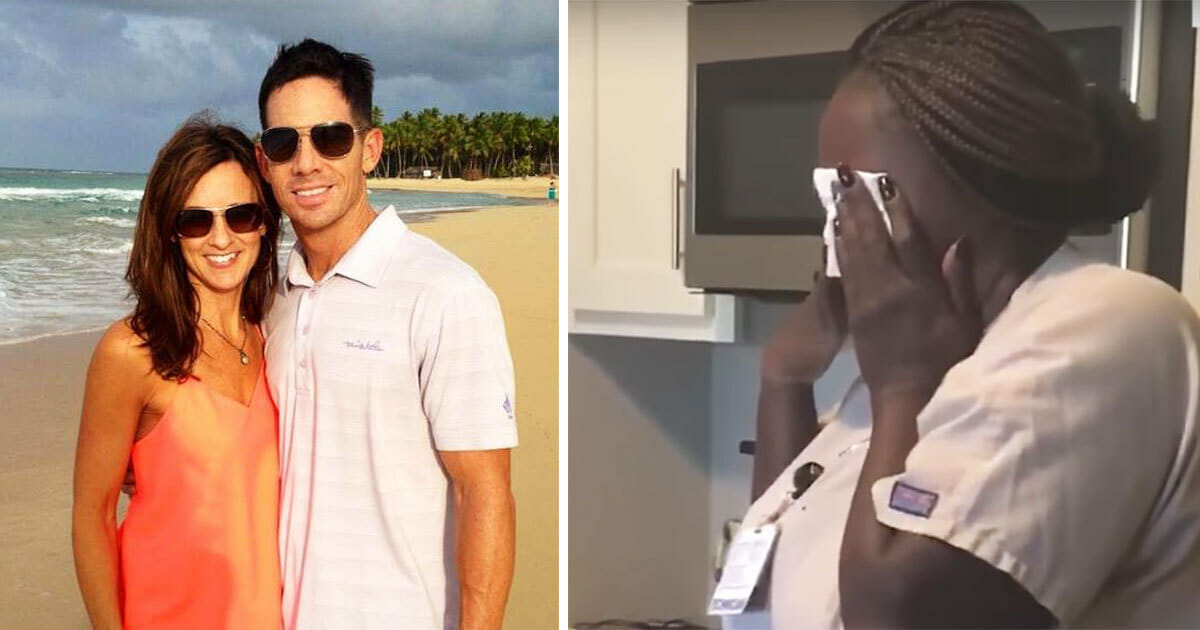 What goes around, comes around. But most importantly, what you give you will receive. If you’ve ever doubted this — perhaps this story could change your mind.

She was a single mother going through hard times, and one day found herself not being able to get home.

He was a good Samaritan who happened to be in the right place at the right time. Serendipity worked perfectly in their favor. But neither one of them would have anticipated the pivotal role they would come to play in each other’s lives further down the road.

On a rainy day in 2014, Chris Wright and his family were on their way to church in Georgia, USA, when suddenly they noticed a car sitting at the side of the road. They stopped and Chris asked the lady if everything was alright. The lady explained she’d run out of gas and was planning to walk to the closest gas station.

That lady was TunDe Hector, a single mother of two, who was at the time going through a divorce and struggling with serious financial difficulties.

“One Sunday I ran out of gas on the highway,” TunDe told CNN. “I started walking with my gas can and I only had $5, and this guy pulled up and said, ‘you need help?’”

She explained her story to Chris after he offered to give her a ride to the closest gas station.

Chris empathized with the single mother.

“I was being tugged on the inside again and felt the Lord said, ‘Whatever you have in your pocket just give it to her. She needs that,’” Chris tells ABC News. “I gave her the $40 and she cried and I didn’t know if I’d ever see her again. But I felt like it was what I was led to do at that point.”

The generous stranger then filled up her gas can and drove her back to her car.

“It was like God sent him my way,” TunDe tells CNN.

Fast forward three years. Chris’s mother, Judy, was admitted to the hospital — struck with Parkinson’s disease. Her condition had deteriorated and Chris and his family decided to find a nursing aide to help Judy at home. They began searching and interviewing different nursing aides in their town.

One day, Chris’s dad called him up and told him about a nursing aide that he and his mom had really liked. He told him that for some reason he felt there was something different about her, and that he and Judy felt better when she was around.

Chris was keen on meeting the woman.

Like his family, he took a liking to her right away. The woman and the family shared a common devotion to faith, and the lady asked Chris what church he went to.

When Chris responded the ‘Cornerstone Church’, TunDe was pleasantly surprised. She added that she’d once met the nicest man there some years back. He’d filled up her gas tank and given her $40 when she needed it the most.

That’s when Chris realized who she was. “That was me,” he told her, in tears. She asked him to take his hat off and she realized it was indeed him. They both cried and it was a special moment for the entire family.

TunDe became an extension of their family and cared for Judy like no other. She would show up days she wasn’t even scheduled to work. Spending so much time together meant the family really got to know TunDe. They knew her dream was to go to nursing school but that she couldn’t afford it.

Judy sadly died on July 9 — which also happened to be TunDe’s birthday.

Some might call it coincidence, but for this family it was a divine intervention.

The family was so grateful for all of TunDe’s help and the way she had cared for Judy. They asked people to donate money instead of buying flowers for her funeral service. The money they were asking to be donated was to go to a fund they had set up for TunDe to pay for her nursing school.

They managed to raise USD $8,000 dollars. Then, their incredible story eventually began to spread online, leading to more donations. They have now collected USD $35,000.

“We know that God orchestrated this whole thing and wove it together,” Chris tells ABC news.

“We just kept saying, ‘There’s got to be something good that will come for this.’”

See the moment TunDe was first given the check of USD $8,000, which has caused a stream of tears worldwide.

Whether you believe TunDee and the Wright family’s story is a chain of coincidences or the result of something greater, it is undeniable that it’s a remarkable story about karma.

If this story moved you, please consider sharing it with all your friends to inspire others to help others in need!