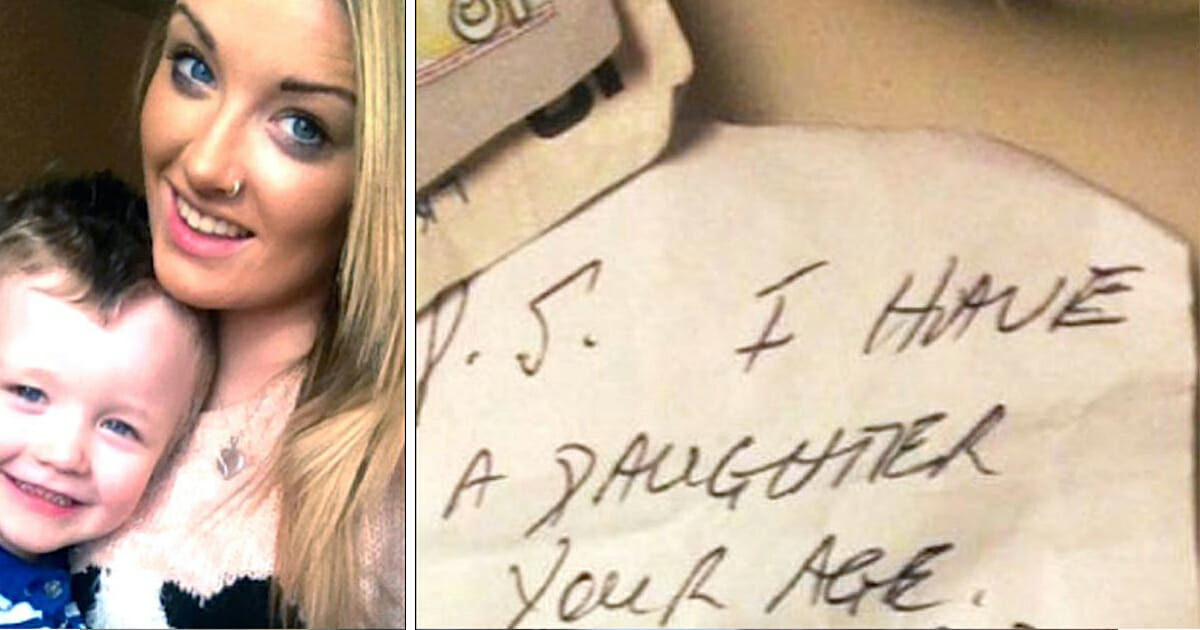 Anyone who has ever raised a child will know that it’s far from an easy job. Young children can difficult at the best of times, and this point is often exacerbated when out and about in public. Few situations are as embarrassingly frustrating as your child having a tantrum in the middle of a shopping center, for example, or on a bus or train.

Indeed, as a parent, one has to maintain constant vigilance. We know ourselves from experience how annoying it can be for others when there’s a screaming child around.

When single mother Sammie Welch prepared herself for a six-hour train ride with her 3-year-old son Rylan, she did everything in her power to avoid any drama during the ride. What she didn’t know, however, was that a stranger was watching them from across the carriage…

Sammie was desperate to avoid Rylan having tantrum amongst a carriage full of passengers just aiming to get home.

She knew the best way to achieve that outcome was to keep the 3-year-old occupied.

Together, they counted things out of the window, painted, read books, ate sandwiches, listened to music, and played games. Sure, the boy was tired and restless, but he behaved exemplarily.

Sammie’s tactics had worked… and eventually the 3-year-old fell asleep in her lap.

That’s when a stranger stood up; a man Sammie had never spoken to before. He had been sitting opposite them, and neither mother nor boy had noticed him — but he had noticed them.

Upon leaving the train, the man tapped Sammie on her shoulder, handed her a piece of paper, and then vanished.

Sammie couldn’t believe her eyes. She found a five pound note (about USD $7) inside a letter that read:

“Have a drink on me. You are a credit to your generation, polite and teaching the little boy good manners.”

But there was more written on the back … and the words left Sammie speechless.

“P.S. I have a daughter your age. Someone did the same thing for her once. Hope when she has children, she is as good a mother as you. ”

It was the nicest compliment anyone could have given the struggling single mom. She did everything she could to raise Rylan — and that a perfect stranger recognized her efforts just made her day! Unfortunately, though, the mysterious man had disappeared before Sammie had the chance to thank him.

She took to Facebook, as well as a local newspaper, to describe what had happened. She hoped she might find him by reaching out.

Low and behold, after six days of searching a man came forward. Sammie was able to reunite with 50-year-old Ken Saunders! “I worry I’m not doing a good job with Rylan all the time — all the time. I worry, am I too hard on him? Am I too soft on him? I try so hard to get it right. So for someone to say I’m going a good job means everything,” Sammie told Daily Mail.

“‘I don’t think he realised the impact of what he did. How it made me feel. I just wanted to thank him. That was all,” she explained. For Ken, however, it was a simple act of humanity.

“I wasn’t going to tell anyone — why would I? It’s no big deal. Lots of people do things like this all the time,” he tells Daily Mail.

You can watch a clip with Sammie and Rylan here:

This stranger showed that even the smallest gestures can have a huge impact — and for single mom Sammie it was just what was needed.

Share this article to show that there is still hope of humanity, and to inspire others to do something nice today!