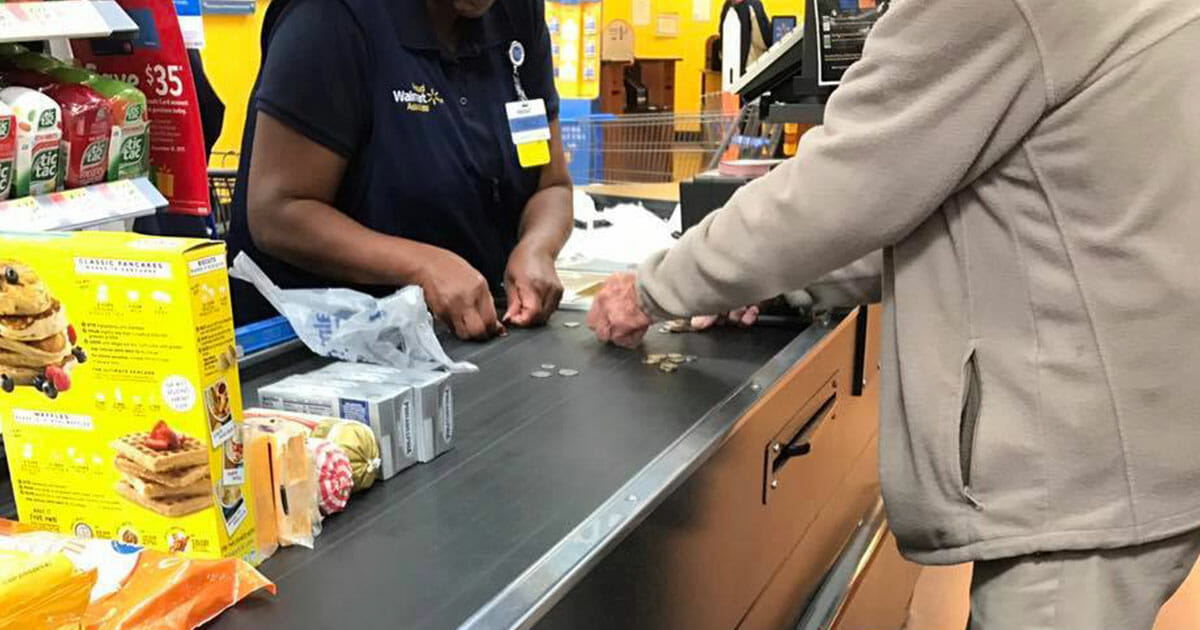 Unfortunately, we live in a world where elderly people can sometimes be forgotten. Some live alone, some live in relative poverty, some live without adequate food.

It almost feels as though certain people forget they’re still humans; humans who were once as we are today.

And yet many of them are everyday heroes. They’ve been and done things we can’t begin to imagine; they may be coming to the end of their journeys, but that doesn’t mean they’re worth any less.

That’s why I’m particularly fond of reading about people like the cashier in the story below. She sets an example all of us can follow …

It was in November that the incident in question took place, in Mississippi, U.S.

In the hustling, bustling rush of lunch time, an elderly man approached the checkout at Walmart wanting to pay for his food. He dug into his pocket and retrieved a handful of coins.

Yet he was left embarrassed. He’d counted the wrong amount, and taken a long time about it. With his hands and voice shaking, he attempted apologies all around.

Nobody was prepared for how the cashier would react.

Another woman waiting at the checkout was Spring Herbison Bowlin.

She dedicated a Facebook post to what happened in the store, one that has been shared by tens of thousands of people since:

“My heart was warmed at Wal-Mart during lunch. This gentleman’s items were scanned and he was given the total.

He looks apologetically back at me and starts taking handfuls of change out of his pockets. He miscounts and starts to get flustered. Gives me a muttered, ‘I’m so sorry.’ His hands and voice are shaking.

This beautiful cashier takes his hands and dumps all the change on the counter and says, ‘This is not a problem, honey. We will do this together.’ He continues to apologize to both of us as we reassure him it’s ok.

They get his transaction handled and he shuffles away.

I looked at this wonderful woman and said, ‘Thank-you for being so patient with him.’

She shakes her head and replies, ‘You shouldn’t have to thank me, baby. What’s wrong with our world is we’ve forgotten how to love one another.’

"My heart was warmed at Wal-Mart during lunch. This gentleman's items were scanned and he was given the total. He looks…

Posted by Love What Matters on Friday, 10 November 2017

Just consider how many people would have been annoyed or frustrated with the old man. It certainly wouldn’t have been unheard of to hell him to ‘hurry up’, or something similar. But instead, the cashier stopped, assessed the situation and proceeded perfectly.

If we’re lucky enough to live that long, one day we’ll all be in that man’s shoes, relying on the patience of youth as we struggle with our crooked fingers.

My family taught me to be kind and respect the elderly. I don’t know about kids these days, a lot are disrespectful towards the elderly and don’t remember the saying what goes around comes around.