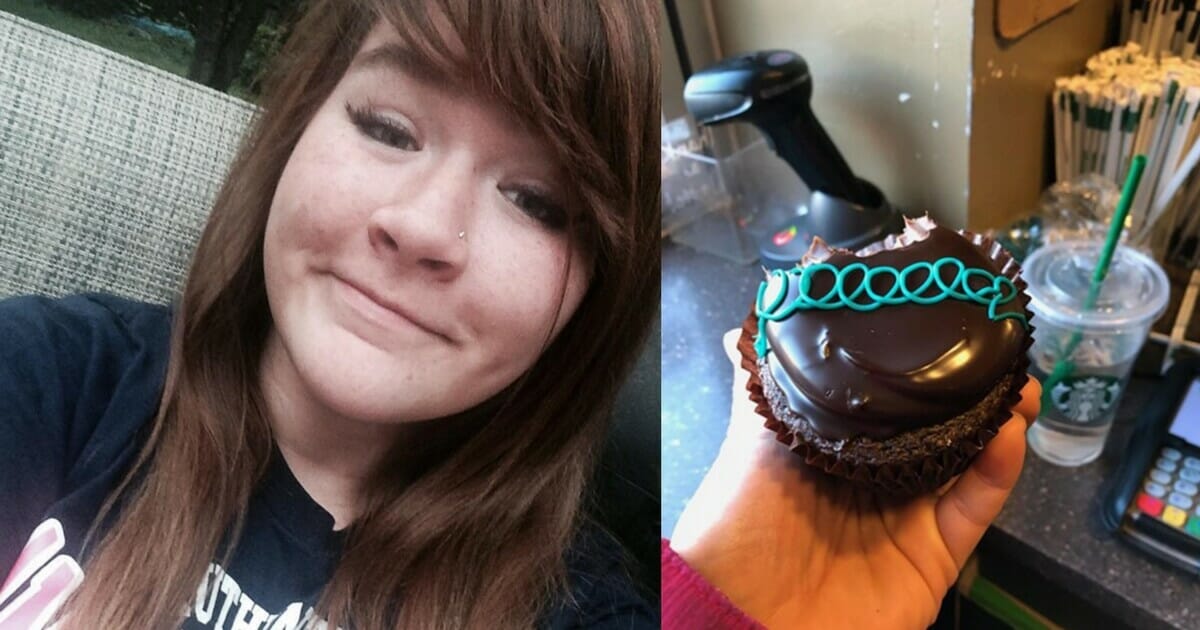 It’s a sad truth that bullying is still abundantly common in every day life.

Whether it’s online, in the workplace or at home, it’s something that can affect most people.

It even happens in public. Just ask 19-year-old Vega Blossom, who, on March 31, went into her favourite bakery, Designer Desserts, to buy six cupcakes during their Easter sale.

Whilst there, she was subjected to verbal abuse regarding her size. Little did her tormentors know that Vega had a trick up a sleeve; she got her revenge in the most fantastic way possible …

It all started when Vega was in line waiting to be served. The woman in front of her was waiting on a cake which was taking some time; Vega could hear an older woman and her friend, behind her in the queue, making rude comments about the delay.

Eventually, after the woman had received her cake, Vega stepped up to the counter to place her order. It was then that she heard the woman behind her making another comment … and this one was aimed at her.

As per Liftable, the woman sneered: “Let’s hope this fat b**** doesn’t buy all the cupcakes.”

I wish barb never died in stranger things, so im channeling her in this selfie.

Obviously, Blossom was left upset by the remark.

“When I heard the nasty things the women said, I honestly wanted to cry,” she said. “It really hurt my feelings.”

What shocked Blossom the most was how ready the woman was to fat-shame her in public.

Looking back on the incident, she continued: “Growing up [as] a chubbier girl, I always got snide comments about my weight from people who, for some reason, think it’s their business.

“Things like this usually wouldn’t bug me, but the fact that I didn’t know these women, and they said this so rudely and loudly — so I could obviously hear it — was different than other times.”

CUPCAKE SALE!!! Select cupcakes ONLY $2.50 each. Stock up now before the snow hits!!! We are Open Until 8pm.

Instead of ordering six cupcakes, Blossom placed an order for every cupcake the bakery had.

The woman behind her, obviously infuriated, continued to mock Blossom as she paid $54 for 20 mega-sized cupcakes. Upon hearing the nasty words being aimed at the girl, bakery staff gave her an assortment of cookies and chocolates for free.

Blossom enjoyed the cakes with her family, friends and co-workers. Later that night, she shared her experience on Facebook, with her story quickly going viral. It ended up accumulating 80,000 likes and 25,000 shares. What’s more, Designer Desserts caught wind of the situation and decided to take action.

In the days that followed, the bakery sent cupcakes to Blossom’s work to show their support for her.

Blossom wrote on Facebook: “Two days in a row now Designer Desserts-Valparaiso has delivered me cupcakes to work and i am honestly so thankful for these guys and everything they have done for me.”

What a great story of a young girl who refused to let the hurtful words of another get to her. It’s also great to see Designer Desserts showing their support for a customer!

We must stand together against bullying! Share this amazing story to remind people that it’s still a frequent problem in the world, and that is must be stamped out wherever possible. If you’ve been a victim of bullying, share your story in the comments box!