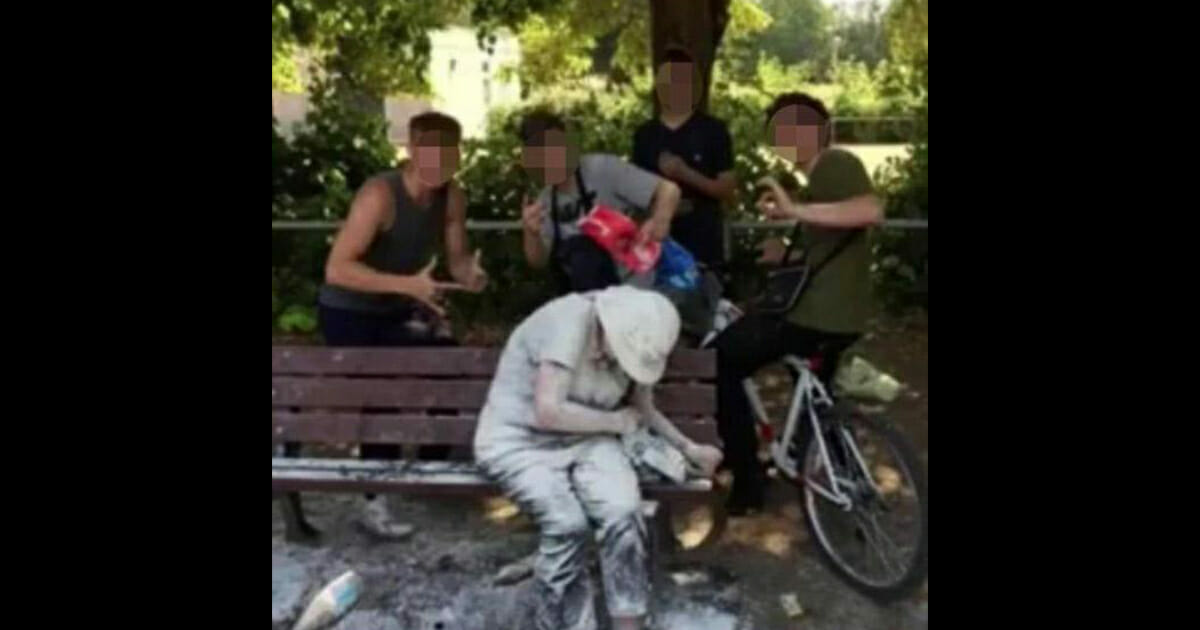 To me it doesn’t matter; they deserve respect.

Last summer the image of 49-year-old Janice Morris cowering on a park bench in Suffolk, England, prompted public outrage after it was shared across the internet.

The photo was spreading like wildfire on the internet, and for good reason.

According to reports in the British press, the four teens threw and eggs over the mentally handicapped woman.

They then posed for photos behind her as she slumped on a park bench in Bury St Edmund, Suffolk.

The woman in the photo was approximately 40-years-old, and suffered from a mental disability.

According to a witness – as reported by the Daily Mail – the woman had a ‘breakdown’ at the park and started to shout at the boys, who proceeded to shower her with water, flour and eggs.

Suffolk police said she was left severely distressed but was not physically harmed during the ordeal.

One of the teenagers, in his infinite wisdom, decided to post the photo in question to social media platform Snapchat.

However, instead of basking in adulation, his upload was met with widespread backlash and earned him a subsequent visit from the police.

Inspector Anthony Bridgland said: “This type of behaviour is totally unacceptable and we are treating the matter seriously.

Soon after the photo was posted, five teens between the ages of 15 and 17 were detained.

Teenagers arrested over flour and egg attack on woman amid fears of vigilante backlash https://t.co/dqLi4ojXc2

“We know this incident may have caused concern and anger both in the local community and online, but we would like to reassure everyone that we are tackling the matter robustly and supporting the victim.”

Four teenagers admitted their part in the incident, but a fifth boy denied a public offence and forced Ms Morris to give evidence at a trial.

At the trial, Ms Morris spoke about the incident and said that it left her feeling “a bit shell-shocked, a bit raw”.

The boy who denied a public offence was found guilty in March. He was ordered to complete 24 hours of work through the youth service and had to pay Ms Morris about $280 compensation and $1180 in court costs.

The four other boys involved in the incident admitted a public order offence at an earlier hearing and were sentenced last year.

Just seeing this photo made my blood boil, and I know I’m far from the only one to react as such. I hope that these teens have learn that this means consequences – shame on you for your inexcusable behavior!