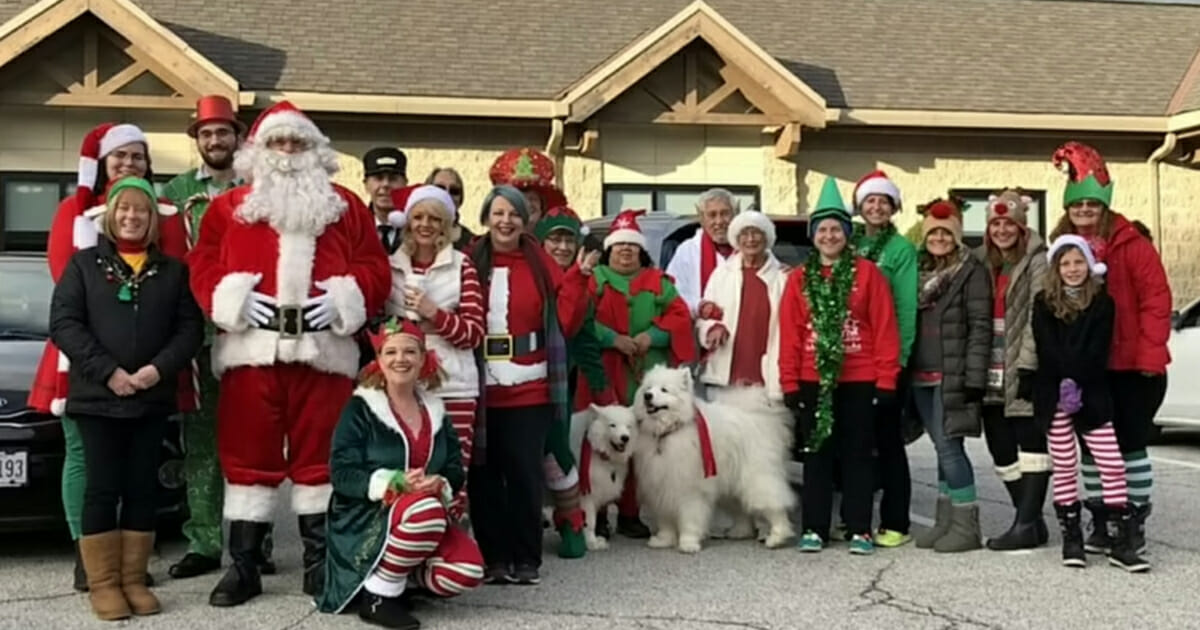 Anyone who’s ever seen a loved one battle cancer can attest to just how terrible the disease is. This is doubly true when the victim is an innocent child.

Keith Burkett, a 12-year-old from Stow, Ohio has terminal cancer, and earlier this year doctors were forced to tell his parents he might not live until Christmas.

In response, his town banded together to do something truly special. They might not be able to take his cancer away, but that doesn’t mean they can’t move certain other things forward so that Keith can celebrate them …

Keith Burkett suffers from a rare form of childhood cancer in his skull, shoulder, spine and liver. Just earlier this year, doctors sat his family down and told them that he might not see 2019.

Reacting to the crushing news, residents of Stow, Ohio decided to give the 12-year-old a Christmas to remember … two months early.

They decorated their homes and cars, filled the streets with Christmas carols and arranged for one neighbor to dress up as Santa Claus himself. Keith, meanwhile, was given the chance to ride in a fire truck, and later handed a medal of bravery from the town’s mayor.

Keith has cancer and has been given weeks to live. Friends, family, neighbors and complete strangers wanted to make sure he was able to celebrate his favorite holiday one last time. They threw him a Christmas parade! pic.twitter.com/c2lEbIWM5z

“It was awesome,” Keith said, as per the Daily Mail. “The fire truck was my favorite part because I’ve never been in one before. I got to beep the horn.”

According to mom Taylore Woodard, the disease has steadily taken over Keith’s life. She wanted to give him a day off.

“Doctors had told me that they didn’t know if Keith would make it to Christmas,” she said.

“He loves Christmas. His life has been taken up with cancer and medicines and I wanted my son to enjoy one last Christmas.

“So at the end of September, we made our house into a winter wonderland.

“We put lights up, candy canes, polar bears and Santas. We had a North Pole sign and put up a banner that said, ‘Merry Christmas Kourageous Keith’.”

It wasn’t long before neighbors joined in the cheer and strung up their own decorations.

Taylore said: “We noticed our next door neighbours put up some icicle lights and garlands and soon everyone was doing it.”

What’s more, in an generous show of support, local resident Brandy Spreizer, who runs a lemonade stand, arranged for more than 50 drivers to decorate their cars in honor of the brave boy.

Hundreds gathered at Stow-Munroe Falls High School to await Keith’s arrival in a fire truck, with Christmas music playing in the background.

“Everyone was dressed up and embraced the Christmas theme. Both Santa Claus and the Grinch were there,” Taylore said.

“Keith was smiling ear to ear. I haven’t seen him smile like that in such a long time.”

Keith might not have long left on this earth, but his family are aiming to make the absolute best of the time he’s been given. Our prayers and well wishes are with them.

If you, too, want to wish Keith and his loved ones well, SHARE this article on Facebook.