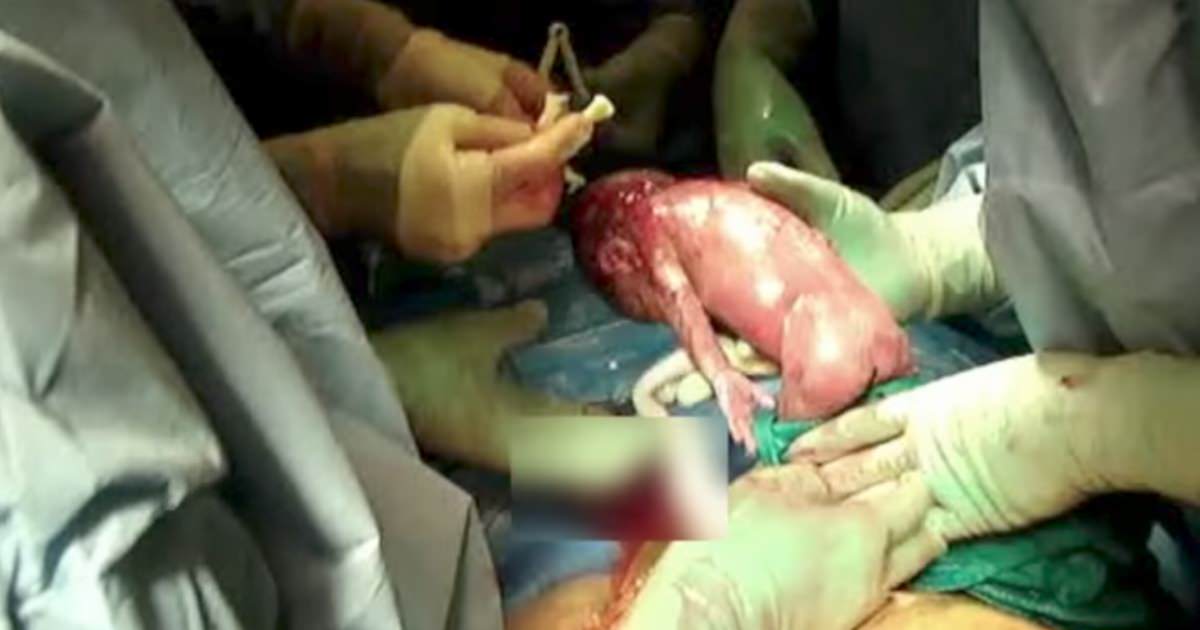 Samantha Weng was over the moon when she received the good news. She had recently gotten married to her beloved husband and they were about to embark on yet another exciting chapter in their lives.

You see, Samantha had found out that she was pregnant – just one month after she’d gotten married. Becoming a mother was something she’d always wished for.

Looking back though, I don’t think anyone could have predicted the long and complicated journey this pregnancy would be.

Samantha, originally from Taiwan, now lives in the USA with her husband.

When Samantha was in her seventh week, the couple went to the hospital for a routine check up. The time had come for an ultrasound and the parents couldn’t be more excited and curious about finding out more about their baby.

Unfortunately, their excitement was met with some tragic news. The doctors notified the couple that they might have to face an Ectopic pregnancy, a complicated pregnancy in which the embryo is attached outside the uterus. The fetus rarely survives and the doctors advised Samantha to have an abortion.

Naturally, this came as a shock to the young woman – the young couple were devastated. But despite the doctors’ advice, the mother decided to wait a couple of weeks before making up her mind, to let it all sink in. For some reason, she felt there still might be a possibility that she could have her baby.

The couple returned to the hospital a few weeks later, for what they assumed could possibly be their very last check up. To their surprise, the doctors now suddenly had a different diagnosis. Not only was the pregnancy looking fine but it turned out that Samantha was pregnant with twins!

Choosing to wait a couple of weeks proved not only to be the right choice, but a life-altering one as well.

As you can imagine, the couple were not only ecstatic, but also relieved. They decided to change doctors and a few weeks later went for yet another routine check up.

You would think the surprises had ended at this point. Nope – there’s more.

As they were telling the new doctor how they were expecting twins, they noticed the doctor looking puzzled.

The doctor looked at the screen of the ultrasound for few long minutes and then left the room to speak to another group of doctors.

A while later, they all returned to the room together with some unexpected news:

“You’re not having twins. You’re having triplets!”

As exciting as it sounded, this also stunned Samantha. Samantha was confident she could handle carrying triplets but she also couldn’t deny the fact that her pregnancy was now regarded as a high-risk pregnancy.

To be on the safe side, the doctor did yet another ultra sound, and that’s when surprise number 4 appeared.

It appeared there was a fourth fetus in Samantha’s stomach. Samantha was terrified. What in the world was going on? It all seemed very surreal.

The doctors told her she would probably not be able to give birth to all babies. She had to once again make a choice.

The doctors told her that giving birth to quadruplets would be too risky. They consoled the parents by telling them that they were still young and had a chance to get pregnant again. Her own life could be at stake if she decided to give birth to all four babies.

The doctors suggested a medical procedure where she would remove the placenta with two of the fetuses. This would then give the two other babies with separate placentas more space.

But Samantha was unable to make a decision. She knew if she gave up any of the babies she wouldn’t be able to live with herself.

“Depriving either one of the babies of life is unfair,” she said.

From there on, she began what was a nervewrecking period. Carrying four fetuses in three different placentas meant she had to stay in the hospital for a whole month.

26 weeks later, the day had finally come. On October 21 2010, with the help of a caesarean, the quadruplets were welcomed into this world.

It was an exciting day but the only thing Samantha was thinking and wanted reasurance about was that they were all breathing – and luckily, they were.

The quadruplets were four adorable and feisty litte girls. They were given the names Audrey, Emma, Natalie and Isabelle. Sadly, for the first few months of their lives their home was the intensive care unit. This changed as they grew strong and healthy and were eventually sent home with their parents.

Ask any parent about what it’s like to have a newborn and I bet you they’ll tell you that their free time went out the window. Now imagine what that’s like, times four!

The months that followed child birth were a major challenge for the new family – especially for Samantha. There were days they had to change diapers around 40 times. Samantha felt like she was breastfeeding around the clock – and spent several nights without any sleep.

The parents could nevertheless not be prouder of their four little bundles of joy!

Take a look at the video below to see how the girls have now grown!

Please share if you agree that families are the most precious thing in the world!