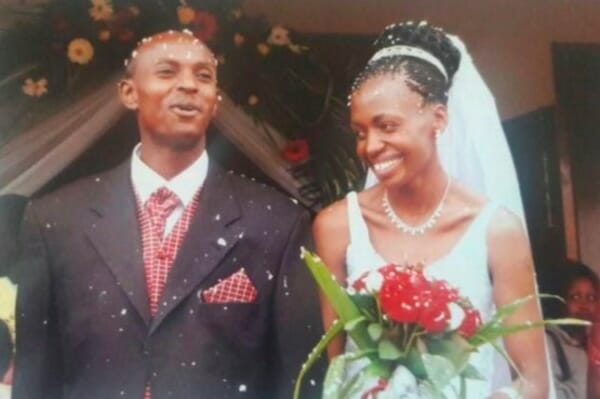 When Terry Apudo didn’t show up to church for her own wedding, her family and friends immediately knew something was very wrong.

But the real reason for Terry’s absence on such a special day was more terrible than the guests could have ever imagined.

Terry Apudo, was a young female pastor, working in a small church in Nairobi, Kenya.

Her wedding with fiancé Harry Olwande, had been in the works for a long time and the couple were in the middle of preparations for the big day.

As tradition goes, the bride and groom spent the night before the wedding apart.

The next morning, as Terry left her house and walked down the road, she noticed a man sitting on the hood of his car.

She walked past him, but minutes later, the man rushed to her and jumped her from behind.

The man violently grabbed Terry and threw her into the backseat of his car, where two other male accomplices were sitting and waiting for her.

The young pastor was kidnapped on what was to be her wedding day, the BBC reports.

“A piece of cloth was stuffed in my mouth. I was kicking and hitting out and trying to scream,” Terry told the BBC. “When I managed to push the gag out, I screamed, ‘It’s my wedding day!’ That was when I got the first blow. One of the men told me to ‘co-operate or you will die.'”

The nightmare didn’t end there — the horror continued inside the car. Terry continued to tell her story to the BBC:

“The men took turns to rape me. I felt sure I was going to die, but I was still fighting for my life, so when one of the men took the gag out of my mouth I bit his manhood. He screamed in pain and one of them stabbed me in the stomach. Then they opened the door and threw me out of the moving car.

I was miles from home, outside Nairobi. More than six hours had passed since I had been abducted.

A child saw me being thrown out and called her grandmother. People came running. When the police came they tried to get a pulse, but no one could. Thinking I was dead, they wrapped me in a blanket and started to take me to the mortuary. But on the way there, I choked on the blanket and coughed. The policeman said, ‘She’s alive?’ And he turned the car around and drove me to the biggest government hospital in Kenya.

I arrived in great shock, murmuring incoherently. I was half-naked and covered in blood, and my face was swollen from being punched. But something must have alerted the matron, because she guessed I was a bride. ‘Let’s go around the churches to see if they’re missing a bride,’ she told the nurses.”

“By coincidence, the first church they called at was All Saints Cathedral,” Terry went on to say.

“‘Are you missing a bride?” the nurse asked. The minister said, ‘Yes, there was a wedding at 10 o’clock and she didn’t come.'”

When the wedding guests found out the real reason for Terry’s disappearance, people started screaming and crying inside the church.

Terry’s family and her fiancé, Harry, rushed to the hospital immediately. Eventually, Terry was moved to another hospital, where the full degree of her physical injuries had become painfully apparent.

“That was where the doctors stitched me up and gave me some devastating news,” Terry says.

The doctors told Terry that the stab wounds were so deep that she wouldn’t be able to have children.

She continued to recount her story to the BBC:

“I was given the morning-after pill, as well as antiretroviral drugs to protect me from HIV and AIDs. My mind shut down. It refused to accept what had happened.

A few days later, when I was less sedated, I was able to look him [Harry] in the eye. I kept saying sorry. I felt like I had let him down. Some people said it was my own fault for leaving the house in the morning. It was really hurtful, but my family and Harry supported me.”

Despite everything, Harry still wanted to marry Terry — the love of his life.

The ceremony took place in July 2005, seven months after their first planned wedding.

At last they stood at the altar together and were able to celebrate and display their love for one another.

Everything seemed to be taking a turn for the better, but destiny sometimes works in mysterious ways.

Only 29 days after they finally got married, another catastrophe occurred.

During a very cold night, Harry decided to warm the house with the couple’s little charcoal stove, which was usually used outdoors for cooking.

Unfortunately, the couple fell asleep when the heat started spreading in the room. When Terry woke up a short while later, she realized something was not right.

She was dizzy and couldn’t get out of bed. With the little strength she had left, she managed to reach the phone next to her bed to call the neighbors for help.

Right after that phone call — she lost consciousness.

Terry was able to be rescued in the very last moment, but sadly, it was too late for Harry. He died of carbon monoxide poisoning.

Terry went into a state of depression so bad that she shut herself off from the outside world.

The only visitor she would receive was a pastor named Tonny Gobanga. He regularly visited Terry at her home, so she could talk to him about the pain that had gotten stuck deep in her soul.

Eventually, with time, the two fell in love.

“Tonny proposed marriage but I told him to buy a magazine, read my story and tell me if he still loved me. He came back and said he still wanted to marry me.

But I said, ‘Listen, there’s another thing — I can’t have children, so I cannot get married to you.’

Three years after her marriage with Harry, Terry once again walked down the aisle, this time with Tonny, who had given her the will to live again.

Sadly, her life looked like it was taking another dark turn — one year after her second wedding, Terry felt very sick.

“I felt unwell and went to the doctor,” she tells the BBC. “And to my great surprise, he told me that I was pregnant.”

Terry’s pregnancy went smoothly. Contrary to the doctors’ words, Terry seemed to be completely capable of giving birth without any complications.

The joy that Terry and Tonny felt holding their newborn daughter Tehille in their arm was indescribable.

Four years later, the pair welcomed their second miracle — their other daughter Towdah.

The men who tortured and raped Terry were never arrested and brought to justice.

Terry’s full story is documented in her autobiography “Crawling Out of Darkness.”

Today Terry travels with her husband Tonny and gives talks. She speaks about the horrific things she has been through and how she got the strength to pull herself out of the darkness and look at the positive things in life.

She also helps other rape victims and hopes her experiences can inspire them to know that they are not alone.

I have to say that I have great admiration and the greatest respect for Terry — what a strong and brave woman!

Please share this story on Facebook so that more people get the opportunity to discover this unbelievable and heartbreaking life story.