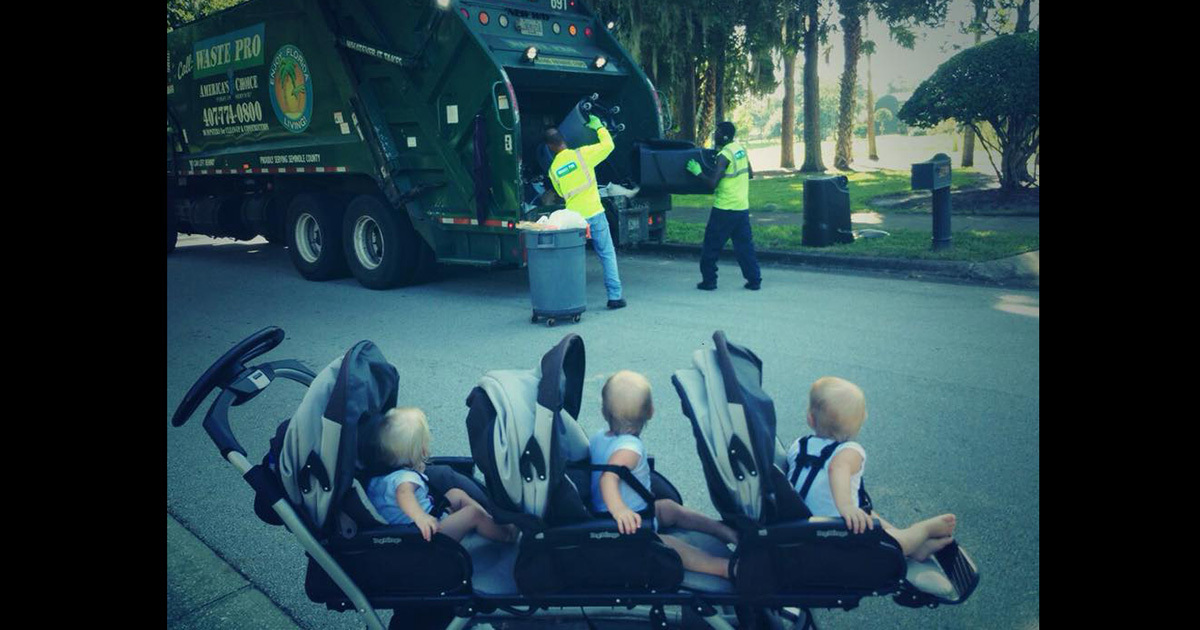 Martha Sugalski is a famous news anchor in Florida and the mother of 2-year-old triplets Holden, Wilder, and Heaton. And ever since the girls were small, they’ve had a very special relationship with the garbage collectors who work in their neighborhood. In fact, you could say they’re the best of friends. Now the story of the triplets and the garbage collectors has spread across the world—and I can certainly see why!

It all started when Sugalski took her girls for a walk in their stroller when they were two months old. The girls were fascinated by the neighborhood garbage truck and watched with excitement as garbage collectors Andrew, Rob, and Chad emptied garbage cans into the truck.

The next time the girls saw the guys, they reacted the same way. And it wasn’t long before the guys began stopping to say hello to their little admirers. Now, Andrew, Rob, and Chad have made it a tradition to say hello to the girls every Tuesday and Friday when they’re passing by the triplets’ house.

It’s been two and a half years since the friends first met and the girls are now best friends with their garbage collectors. Every time the guys come by, they stop and talk to the girls for 10 to 15 minutes.

Although the triplets are only two years old, they keep an eye on which days are garbage collection days. They won’t even help unload the garbage in the truck, and sometimes they invite their friends for a coffee break.

Sugalski often posts pictures of her daughters on Facebook and already thousands of people have been charmed by the friendship.

Martha says that her daughter Holden is particularly close to Rob, as they have quite similar personalities. Both are a bit introverted and they enjoy each other’s company.

“She’s always the last one to come running down the driveway, but she goes straight to Mr. Rob every single time,” Martha told BuzzFeed.

One of the three garbage men, Andrew Black, is currently on leave from work because of an injury. But he misses the girls, so he goes to meet them anyway.

“I just love the triplets. I almost feel like they’re my own. Every time I see them, they just bring me joy,” he says.

What a beautiful friendship! I get so happy when I see the pictures on the triplets and their best friends. Hope they stay friends for a long time, much longer.

Were you also touched by this beautiful friendship? Please share this story so that more people can see this great friendship!