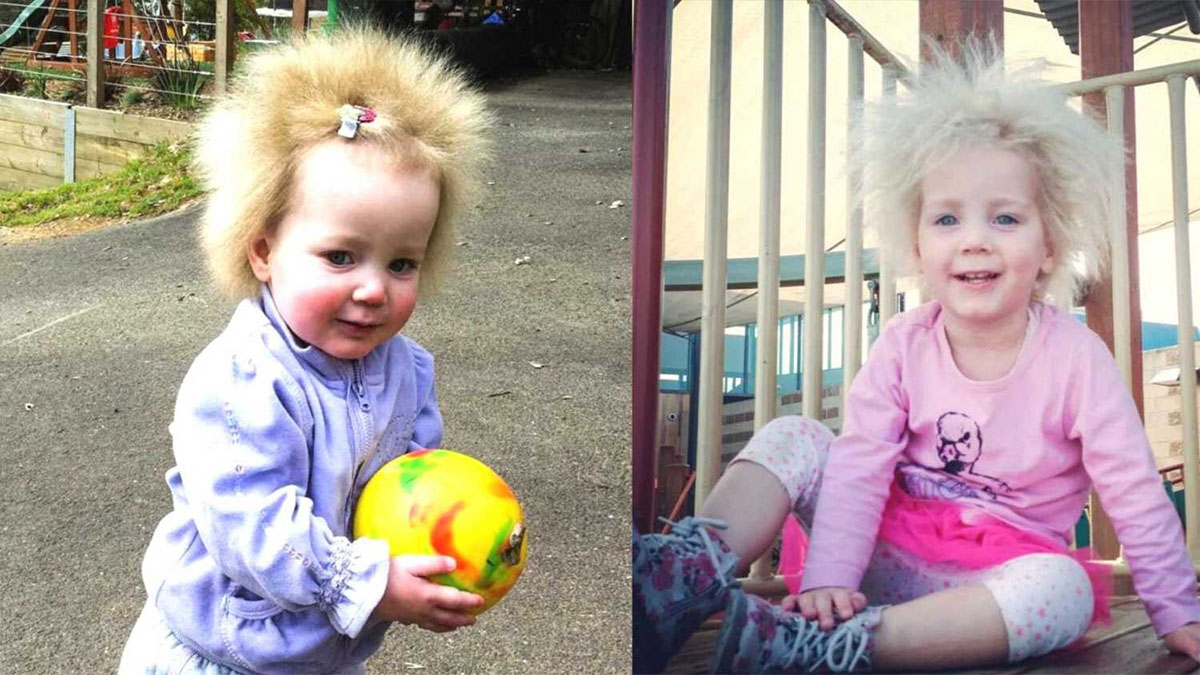 When baby girl Shilah was born her parents were so excited to add a little girl to the family.

She had soft brown hair just like her older brother but after a while it began to fall out and was replaced with blonde locks.

When Shilah was three to six months old her parents noticed that her hair was growing up instead of down, it was also very soft and fragile.

Sadly her parents got all kinds of comments when they were out from rude passersby who asked them “what’s wrong with her hair?”

Her mom Celeste Calvert-Yin said: “It was hurtful and sometimes quite rude, but I’m sure they were just being ignorant and insensitive.”

“Then there were the people who were complete strangers that would peer into her stroller, stare at her and make comments about her everywhere we went. ‘Looks like she stuck her finger in the power socket,’ was a frequent comment,” she told Love What Matters.

This little girl and her parents were subjected to all kinds of rude and insensitive comments, even strangers touching their child’s hair, but their response ensured their little girl Shilah grew into a confident youngster who appreciated her hair for its unique beauty.

“She’d make sweet remarks like, ‘Just call me fuzzy. Some days I look like a lion with a crazy mane,” her mom said.

At childcare Shilah would tell the other kids that she was “magical and special” and they were just “normal and boring.”

But her parents had no understanding of why their daughter’s hair grew this way.

“We just assumed it was a gene from our family history and that was just that. So, we told people that perhaps it was a throwback to one of our family histories and people were okay with this explanation. Or I just said she was ‘blessed with her hair and born to be noticed.’ That was easier for kids to understand.”

They also came to embrace the comments of others and see the lighter side of them.

“I remember one day a stranger likened her to Doc Brown from Back to the Future as she was wearing a lab coat. ‘Your daughter looks just like Doc Brown, the guy in the movie. The crazy scientist guy!’ Others often said she had ‘hair like Albert Einstein.’ They were spot on and it did become a bit of an in-house giggle for us,” Celeste told Love What Matters.

People often told the family they should take her to the doctor but they saw no need until she was in hospital for her teeth and a doctor asked her if she was aware of Uncombable Hair Syndrome (UHS).

“The doctor explained that UHS was caused by a gene mutation and it involves silvery blonde or straw-colored hair that stands up from the scalp and can’t be combed flat. The doctor had researched UHS but have never met a child with the condition.

“I was shocked, teary and excited all at the same time, finally a possible answer to all those years of questions. The doctor was just as excited.”

Other than her teeth having weakened enamel she is perfectly healthy. Her condition means her hair grows differently because it’s missing a protein.

After her parents were told her condition they wanted to share it with others to help others around the world.

Through her Instagram page they have reached over 15,000 people around the world.

“People are constantly reaching out for advice and sending photos of their kids in the hope that they too may have found the answer. This is truly humbling,” her mom said.

Shilah, now 10 years old, even encourages other kids to love what makes them different.

“There is nothing wrong with being different. If other people stare, it’s because they’re jealous,” Shilah said.

Her mom says their daughter is a daily inspiration.

I think Shilah’s blonde locks are beautiful! She is an inspiration to so many around the world by bravely sharing her journey and putting herself out there.

Help us let this little girl know just how special she is by sharing her story.