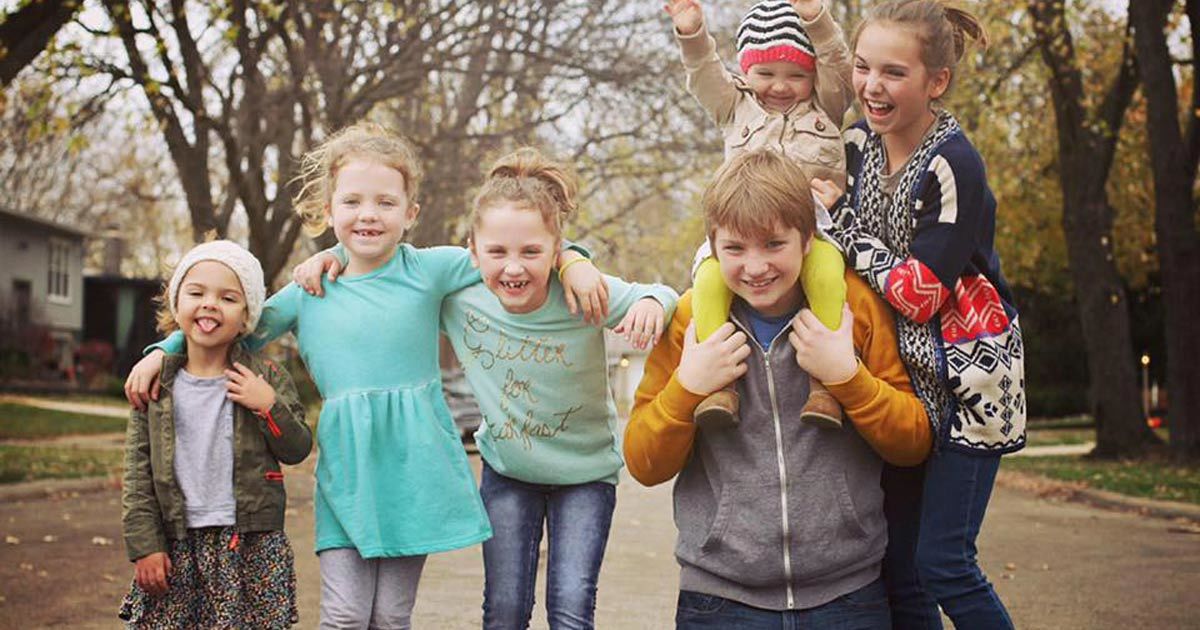 We’ve seen online Facebook posts go viral every now and then. Sometimes, it’s because they send an important message that should spread. Other times, as in the example below, they are just too witty and funny not to share!

Meghan Maza Oeser, a mom of 6 beautiful children, is preparing for a girl’s weekend. Meanwhile hubby will look after their 6 precious and adorable children, 5 girls and 1 boy. But as soon becomes clear, the kids are certainly cute- but also a handful.

Megan takes her husband on the crazy roller coaster ride that is, well, daily life with 6 kids at the Oesers. While hubby might struggle through the weekend, I had a 100% blast reading through her post, which is quickly going viral, with tens of thousands of likes and shares in just days.

Have a read for yourself below. Isn’t family wonderful?

A letter to my husband as I leave for girls’ weekend…

Dearest Husband,
I’m writing this to you out of love, not fear. I wanted to go over a few things with you before you embark on this weekend alone…with the others.

Nighttime, daytime, breakfast time, and somewhere around lunchtime can easily be mistaken for pure HELL, with Satan coming off as a My Little Pony in comparison.

Upon arriving home after work, things won’t seem so bad. The others will hug, jump, and for the most part, be pretty excited to see you. This will be short lived…I promise. School season or not…this is also known as hell hour. The others will fight about anything and everything, with Quinn and Penny being the biggest instigators. It’s most likely that Quinn will be pissed off about Penny wearing her Elsa dress, and Penny equally pissed off because Quinn will ONLY refer to her as Anna. Penny will also be fighting sleep, which I’ll get to later.

Dinner will suck. Bailey will want pizza, while Harper will ask for hotdogs. Quinn will cry when you say the word hotdog, and will insist on Mac n cheese (but not the orange kind or the white kind, but the purple kind). We’ll be fresh out of the purple kind, so she’ll then ask for toast. You’ll already have started making mac n cheese for Penny, but since she heard Quinn ask for toast, she’ll also want that toast. You’ll end up tossing the Mac n cheese because Bailey got the stomach flu 5 years ago after eating the orange kind, and Harper prefers the white kind. You’ll also forget about Harper because her friend Lily “unexpectedly” stopped by, so they went ripsticking down the street. Everyone will eat cereal for dinner, and Lily will come inside for a bandaid.

You’ll want to sit down and relax after dinner/breakfast, but I’m warning you against this. It will get quiet…REAL quiet. This is when you’ll realize that the threenager has fallen asleep somewhere. Do NOT let the threenager fall asleep. You’re basically fucked if this happens. She will be wide awake until at least 1:30am if you’re not careful. Given your 9:30 bedtime and 5am wake up, this is less than ideal.

Lily’s still there. You’ll then wonder where in God’s hell her parents are. You’re guess is as good as mine. I’ve yet to meet them.

Pajamas. FUCK pajamas. Don’t even ATTEMPT anything but a nightgown for Penny. And if you cannot find a nightgown for Penny, keep fucking looking. She’ll ask for her Minnie Mouse nightgown, but once you put it on, she’ll scream in agony because the sleeves are CLEARLY ripping her fucking arms off. Just find her Elsa one. Chances are, it’s dirty as shit, but so what…so is she. I can’t remember the last time I put soap to that one.

Go ahead and leave Penny on the couch with you. God knows you let her ass fall asleep somewhere prior. Quinn, Harper, and Bailey will go down seamlessly. Just wait. As they lie in their beds, they’ll then realize that their tiny mouths are on God damned fire, and they’ll act as if they’ve just walked 800 fucking miles through the Sahara. They will come down…one by one…every god damned 5 minutes…for water. Don’t let ANYONE use Quinn’s pink Elsa cup. If she sees this, she will lose her holy shit.

You’ll end up bringing Penny to bed with you, thinking that’s a good idea. Ha ha ha ha ha! You may as well sleep next to Evander Holyfield on uppers.

Just try getting her into her bed. Give her the iPad. This will save your life…promise. Make sure you turn the volume down, along with the screen brightness. Speaking of brightness, don’t forget the diffuser. Fill that shit up, and add 2 drops of Peace and calming, one lavender, and one stress away. If she was a real dick that day, add some frankincense. Set the light to PURPLE. Sweet baby Jesus, please remember purple. If you set it to blue, she will act as if her retinas are on the god damned sun. Don’t forget her sippy cup. Seriously…DON’T. She’ll drink some, and then ask you to take it. She’ll want you to place it on her dresser. She’ll call you in 5 minutes later for the rest. She’ll call you in AGAIN to put that shit back on the dresser. She’ll then, sure as God made little green ass apples, wake up at 3am screaming that someone has stolen said sippy cup. Just fill that shit back up, and pray to Peter and Mary that she falls back asleep. Oh, and don’t forget her fan. That girl sweats like a whore in church that just ate 12 beef sandwiches.

Breakfast. Ha! Just as fun as dinner…if not worse. Get coffee. LOTS of coffee. You’ll need it. Penny might want cereal, or she’ll go for toast. Whatever you do…LET HER PICK HER SPOON. Chances are, Quinn will have the ULTIMATE spoon, and Penny will convince you that you’ve left her with the shittiest spoon in the bunch. Sometimes I’ll give her a fork, and then flip her off. Breakfast will be such a shit show that you’ll forget to eat, and begin to experience the caffeine shakes.

Oh, also…just incase you wanted to get ANYTHING done this weekend…good fucking luck. Quinn cries basically every 5 minutes, and you would think that Penny’s esophagus was on certain fire every 4.5 seconds. She’ll need constant refills, which leads to more potty breaks. Sometimes she can go by herself, and sometimes she’s completely useless and will whine about everything. Including, but not limited to, her underwears feeling funny. Have backup underwears. Oh, and since you made me get rid of most every sippy cup, leaving me with 2…she’ll lose those. Good fucking luck finding them.

Did this mom’s wit and charm just make you love the whole family? SHARE her fabulous post with everyone else you know that has a great sense of humor!