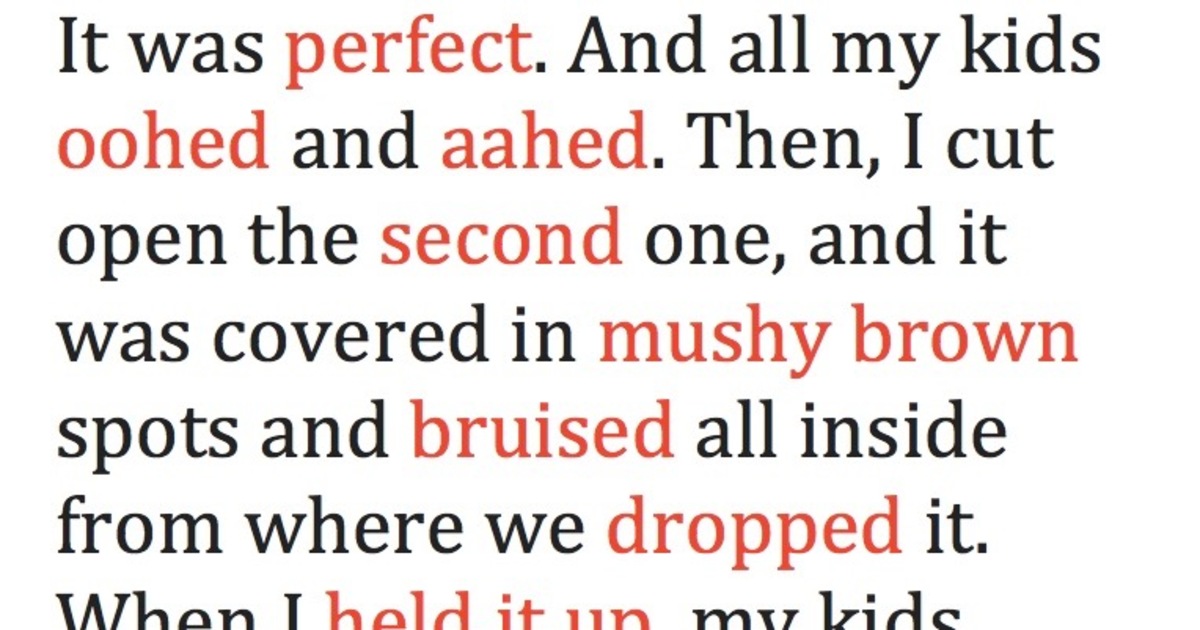 Students learn many things in school and not all of them are on the official curriculum. Take social skills, for example. As soon as children enter school, they learn how to make friends, how to be a part of a group, how to work together with their peers… But unfortunately, some kids also learn how to be bullies. It’s not that they’re bad kids or that they do it intentionally, but often in order to fit in to a clique or to strengthen their position in a group, some students bully their fellow classmates. And sure, sometimes teachers talk about bullying with their kids, but I’ve never read such a beautiful lesson about bullying as the one that the teacher shares in the story below. It’s brilliant, direct, and it changed the way her students looked at bullying forever. And as you’ll see, it’s one that all parents and teachers should read so they can also share this lesson with their kids.

“I decided to stop by the store this morning and buy a couple apples. During our morning meeting (where we sit in a circle and do spiral lessons), I told my class we were going to try something different and I showed them my two apples and asked them to list the differences and similarities between the two apples. They were both exactly the same color and shape—one was a little brighter and bigger, but that was literally the only difference.

I then held up the other apple that was only slightly discolored and smaller and I said, “Gross. This apple looks disgusting!” and dropped it on the ground. My kids all looked at me like I was INSANE! A couple laughed uncomfortably, but for the most part, they thought I had lost my mind.

Long story short, my kids got very into saying mean and hurtful things to this apple and dropping it in front of them. ‘I hate your skin.’ ‘You’re an ugly shade of red.’ ‘Your stem isn’t very long.’ ‘You’re probably full of worms.’ And on and on and on.

So by the time this little apple made it back to me, everyone had had a chance to really rip this little guy apart. I seriously started feeling sympathetic toward an inanimate object… But moving on, I then held both of the apples up for my kids to look at and asked them to now list the similarities and differences of the apples again.

It came back the same. There really was no difference. Even after they had repeatedly dropped this apple, you couldn’t really tell that it had any damage.

I then asked my students who wanted a piece of the apple. Of course! Fooooood…. ALL my students raised their hands because they wanted some.

I took out a cutting board and knife and proceeded to cut the shiny apple open. It was perfect. And all my kids oohed and ahhed.

Then, I cut open the second one, and when I opened it, it was covered in mushy brown spots and bruised all inside from where we dropped it. When I held it up, my kids were like, ‘Ewww! I don’t want to eat THAT apple!’ ‘Yuck!’ ‘That looks disgusting!’

That’s when I just looked at them and said, ‘But didn’t we all contribute to the apple looking this way? We did this. Why shouldn’t we eat it?’ They all just kind of stopped and got really quiet.

I continued, ‘See guys. This is what we do to other people when we say mean and hurtful things. When we gossip or call someone ugly or fat or tell them they aren’t good enough or that they can’t be friends with us, we are just dropping them and causing one more bruise, a bruise that—while we can’t see on the outside—is very real and very destructive! It doesn’t just go away—the bruises just keep getting worse and deeper…’

‘THIS!’ I said as I held up the bruised apple, ‘is what we do to each other. We have to stop dropping each other:’

I’ve never seen my kids ‘get’ something so fast before. It was so real to them. Students cried and laughed and it was very emotional but absolutely amazing. They got to journal about everything, and some of the responses I got… well, I sobbed all the way through lunch. I had so many kids come up and hug me later and tell me that they were so happy that a teacher ‘got it.’”

Were you also impressed by this teacher’s genius lesson? Share with all of your friends who are parents or teachers!