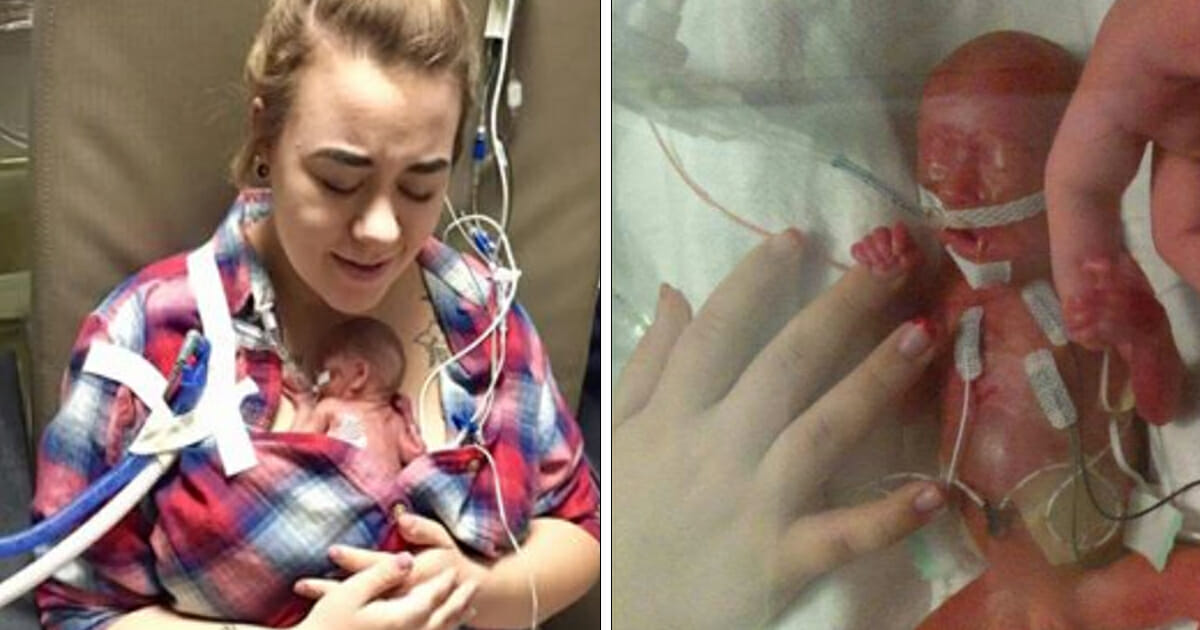 Being told you’re pregnant is a wonderful feeling. That sense of sheer wonderment and possibility for the future simply can’t be matched.

So it was for Tori Keller, a 19-year-old from Alabama who was told she was pregnant with quadruplets. What should have been a period of momentous joy soon became a nightmare, however, when she was dealt a bitter blow at her 15-week scan.

Tori was told that three of her unborn babies – babies B, C, and C – had been sharing a placenta that sadly wasn’t enough to support them all. Baby D no longer had a heartbeat.

Tori and partner Tyler Hallman were told she would have to carry all four of the girls to term, despite the fact one had died.

“I had to carry on. I knew that I couldn’t give up for my other babies. I didn’t know how to feel about carrying her with no heartbeat, but I didn’t have a choice,” Tori explained.

Then, just two days after her 18-week appointment, Tori noticed that she was no longer feeling movement. Upon suffering pain in her side she contacted her doctor, but was told not to worry – she was informed the pains were likely a result of her uterus expanding.

Tragically, the reality was far worse. At their 19-week appointment it became apparent that babies B and C no longer had heartbeats, leaving Tori and Tyler with just one baby living inside her womb.

Tori was determined to save her remaining baby girl, and was closely monitored. At just 21 weeks she was taken to hospital for an examination, as her cervix had weakened. At 23 weeks she had to undergo an emergency cesarean after going into labour prematurely.

“The labour was barely noticeable at first, some minor back pain but as it got more intense, and coming and going, I was terrified,” she said.

“Especially when the nurse confirmed I was having contractions. Then when my water broke, I knew there was no going back. I was so scared that I was going to lose my baby.”

Little Athena was born January 2, 2017, weighing a tiny 1lb 5oz. The baby’s eyes were fused shut, and her ears hadn’t yet properly developed.

Yet in the mist of Athena’s birth, tragedy remained: Tori also had to deliver her other three babies.

She said: “Recovery from labour was nothing like I had ever experienced before. I was cut differently than ‘normal’. I was cut horizontally on the outside, but on the inside, I was cut vertically.”

As for Athena, Tori and Tyler were forced to wait two and a half weeks before they were even able to hold her. She spent the first 127 days of her life in hospital before being brought home. Needless to say, it was a trying time.

“Seeing Athena for the first time was unreal. Of course, I never wanted to see her like that, but it truly is an amazing thing to see a baby that small,” Tori explained.

“I was scared, and sad that she had to be hooked up to tubes and wires, rather than in my belly, but I was filled with so much love for her.

“Holding her for the first time, it was the best feeling ever. It felt so natural and perfect. We connected. There’s no other way to describe it but perfect.”

Tori says Athena is now a lively, talkative toddler who is a big sister to one-year-old Zachariah and making great progress with her development.

“She is amazing, now. She walks, talks, runs, jumps, screams, and just everything a normal toddler does, even the tantrums.

“She is behind on her speech, but we are working on it. A year ago, she could say maybe three to five words. Now she does nothing but talk, even if you can’t understand her.”

Here’s to wishing Athena all the very best in life. We’re sending prayers to Tori and Tyler for their three angel babies.

Share this article if you want to wish them well!