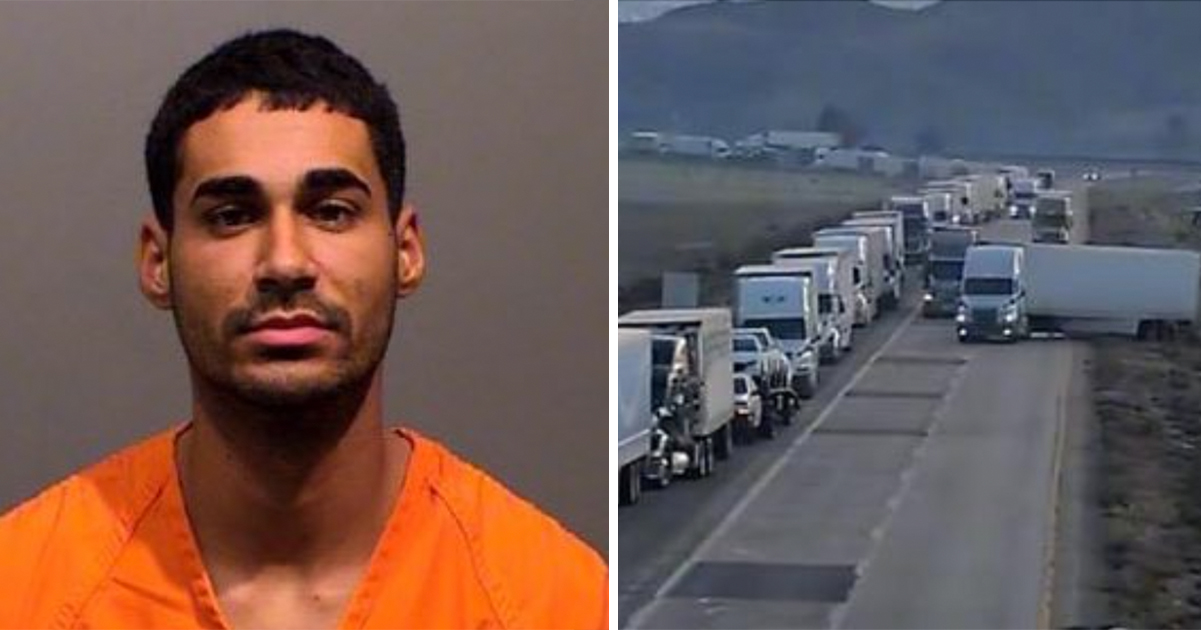 The case of Rogel Aguilera-Mederos has been nothing if not controversial, and it would appear that controversy has no end in sight.

Last week, Aguilera-Mederos was sentenced to an incredible 110 consecutive years in prison after being found guilty on all 27 counts relating to the 2019 crash that killed four and left others injured.

In the immediate aftermath of the sentencing, there was an outpour of criticism online – many believe that Aguilera-Mederos’ punishment is unduly harsh.

Now, new videos posted to social media appear to show truckers protesting the sentencing by refusing to drive through the state of Colorado.

Posted to TikTok by user @ntgi2020, a video showing said protest was accompanied by the caption: “This truck is no longer going to Colorado. We want justice for Rogel Aguilera. Truckers, he needs our help.”

The TikTok video, calling for all truck drivers to join the effort to protest the sentencing, has since gone viral, garnering more than four million views.

One top comment reads: “I am a trucker and will NO LONGER be going to Colorado.”

It was April 25, 2019, that Rogel Aguilera-Mederos, 26, claims his brakes stopped working while he was driving an 18-wheeler on Interstate 70 in Lakewood, Colorado.

The result was a devastating crash that claimed the lines of four people and injured many others.

Speaking to the judge for the last time prior to last Monday’s sentencing, Aguilera-Mederos said: “It’s hard. This was a terrible accident, I know. I take the responsibility, but it was an accident.

“I have never thought about hurting anyone in my entire life and Jesus Christ, he knows that he knows my heart.

Prosecutors, meanwhile, argued that the 26-year-old had made a “bunch of bad decisions” in the build up to the crash, including failing to use a runaway truck ramp. The 18-wheeler was traveling at about 85 miles an hour when it hit dozens of cars that had been stopped on the highway, leading to a massive explosion.

Judge A. Bruce Jones then handed down a sentence of 110 years in prison. He admitted that this was the minimum that could be given due to state laws.

Supporters of Aguilera-Mederos, who was 23 at the time of the incident, are refusing to stay quiet. A petition has been set up to challenge the harsh sentence, one that has been signed over 4.3 million times after going viral online.

The petition reads: “Rogel Lazaro Aguilera-Mederos, 23 has nothing on his driving record, or on his criminal history. He had complied with every single request by the Jefferson County courts, and investigators on the case. He’s passed all of the drug and alcohol tests that were given including a chemical test.”

It continues: “This accident was not intentional, nor was it a criminal act on the driver’s part. No one but the trucking company he is/was employed by should be held accountable for this accident. No, we are not trying to make it seem any less of a tragic accident than it is because yes, lives were lost.

“We are trying to hold the person who needs to be held responsible, responsible. The trucking company has had several inspections since 2017, with several mechanical violations.”

It then goes on to conclude:

“Rogel is not a criminal, the company he was working for knew the federal laws that go into truck driving but they failed to follow those laws.

Rogel has said several times that he wishes he had the courage to crash and take his own life that day, this tragic accident wasn’t done with Intent, it wasn’t a criminal act, it was an accident. Since he has been sentenced, I have changed this to granting Rogel clemency or commutation-as time served.”

I just don’t know what to feel about this case. It looks as though Rogel’s supporters have a very valid point, and 110 years in prison for an accident is outrageously harsh.

Do you agree? What do you think should be done about this man’s sentencing? Let us know your thoughts in the comments box.

Meanwhile, share this article on Facebook to ensure the people you love are kept up to date with the latest information.