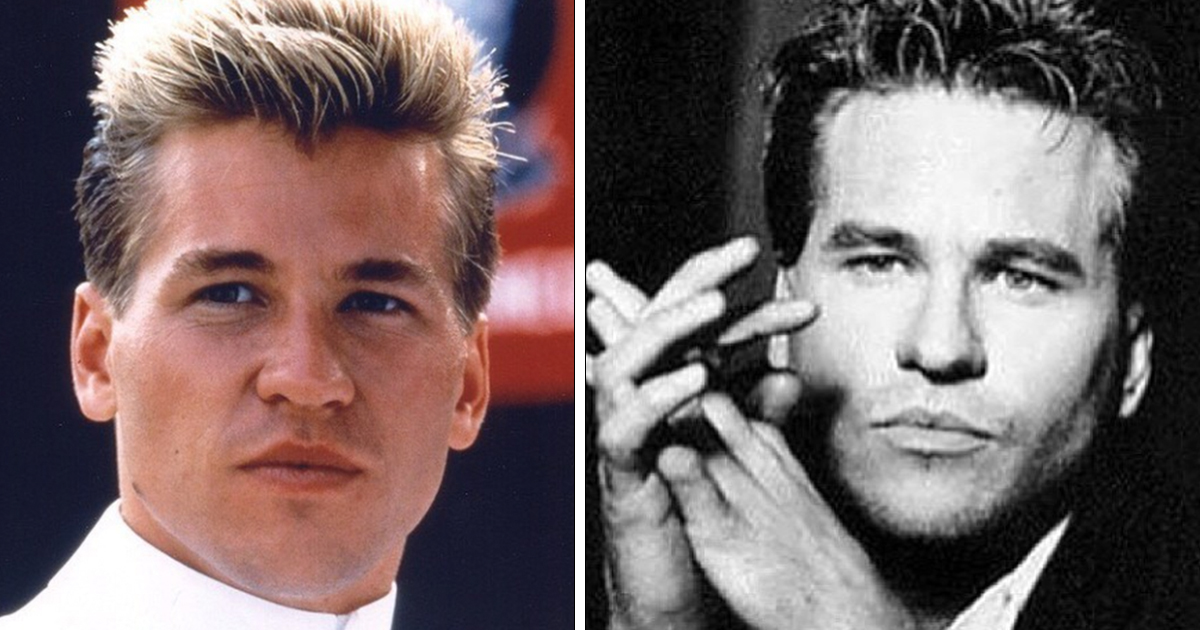 If there’s one thing we know for sure about the dazzling lights of Hollywood, it’s that they’re fickle, impartial, and oh so ruthless when it comes to building someone up just to drop them down.

I mean, how many ‘stars’ have we seen come and go? How many times have we watched someone groomed for the big time only for their name to drop out of all sight and memory after a couple of years?

That’s why, for me at least, when a person is able to leave their stamp over the course of several generations, it’s a truly impressive feat. Val Kilmer is one such star … bursting onto the scene after appearing in a series of blockbuster hits, and then doing enough to ensure he was ingrained in popular culture.

After all, his heyday might have been ’80s and ’90s, but his legacy has secured his position as an all-time favorite.

Even so, there’s still a good deal about the now-60-year-old that you might not know. I mean, I consider myself something of a diehard fan, and there was a good deal I didn’t know about Val, including his turbulent love life and his somewhat dramatic physical transformation …

Val Edward Kilmer was born on December 31, 1959 in Los Angeles. Though it might be difficult to imagine him in any profession other than acting, it wasn’t as though his family had a history stepped in performance.

No, in fact his father, Eugene Kilmer, was an aerospace equipment distributor and real estate developer.

Which is why it might well have surprised his parents that Val was such a naturally talented showman. After attending Chatsworth High School (with Kevin Spacey and Mare Winningham), and the Hollywood Professional School (where the afternoons were kept free for students to focus on auditions), he became the youngest ever person at the time to be accepted into the Juilliard School’s Drama Division in New York. No small feat given the obvious prestige.

By this point, it was starting to become clear that Val had serious talent. That, along with his charisma, was sure to take him far. Just how far, of course, very few people would have guessed.

Even so, Val found his time at the Juilliard School difficult. He didn’t fit in well with the establishment’s authoritarian way of running things, which led to complications when he wanted to go his own way in certain manners.

Nevertheless, he undoubtedly honed his craft there, and, despite the trials and tribulations, he graduated with a good deal of skill and experience that would stand him in good stead in the years to come.

Following Juilliard, the young Val dove straight into the New York City theater scene, taking on roles and making a name for himself on the circuit after a string of well-received performances on stage.

Around this time he was also forging another sort of reputation: that of a ladies man. He would go on to enjoy relationships with the likes of Cher and Ellen Barkin, but it was during his time on the theater scene when the wheels started to turn in this respect.

Before long, Val had started to make serious moves into the world of show business. He made his big-screen debut in the 1984 spy spoof movie Top Secret!, following it up with a supporting role in Real Genius (1985).

Yet it was his next big film, appearing opposite Tom Cruise as Iceman in Top Gun, that really propelled him to fame.

Top Gun proved a massive financial success worldwide, and shed light on Val Kilmer as he was just emerging in the world of blockbuster films. Overnight, he became a fixture on the Hollywood map, and that, naturally led to new speculation over the man behind the winning smile.

Kilmer followed Top Gun up with roles in several big films over the course of the ’80s, and appeared in the ABC afterschool Special One Too Many with Michelle Pfeiffer. That in itself sparked rumours of a budding romance between the two, though neither of them confirmed them.

Instead, two years later, Val released a poem about her named “The Pfeiffer Howls at the Moon”. An ode to a lasting friendship or a reflection on a relationship kept away from the cameras? We’ll never know.

One thing’s for sure, and that’s that Val had yet to meet his soulmate. Yet he wouldn’t be forced to wait long in the endeavour.

In 1988, Val took on the role of Madmartigan in George Lucas’s fantasy epic Willow. As well as once more increasing his notoriety, Kilmer also met actress Joanne Whalley. The pair spent a lot of time with each other on set, and found they had more in common than they had perhaps realized.

Their instant attraction blossomed quickly, and the couple tied the knot that same year, pledging themselves to one another.

The years continued to roll by and Val delivered ever more impressive performances, including a stellar portrayal of Jim Morrison in the 1991 biopic The Doors. Val also provided the vocals for the movie’s soundtrack, proving that he was more than just a one-trick pony.

At this point Val was truly at the apex of his career. A household name in Hollywood, and a recognizable figure around the world, he was a bonafide superstar.

Not only that, but he become a dad to a little girl named Mercedes in 1991, and it truly seemed like he had the perfect life.

And yet it would be during the course of the ’90s that Val would come to something of a crossroads.

Further appearances in flicks such as Tombstone and True Romance solidified his position as a Hollywood heartthrob, and it was in that realm that his reputation had been built.

And yet Val himself reportedly wanted to take his career in another direction. Classically trained, he sought challenging and more serious roles. Instead, he was typecast as an action hero.

His resulting reluctance to take on some of the blockbuster roles he was offered led to rumours that he was difficult to work with on set.

Things came to a head in 1995, when Val took on one of the most memorable roles of his career. Batman Forever, produced by the legendary Tim Burton, ended up being the year’s highest grossing film, raking in some $336.6 million at the box office.

Yet, once again, Val was thrust into the mould of an action hero as the Caped Crusader. Speculation suggested he and director Joel Schumacher had clashed multiple times on set, and the actor was left unsatisfied.

One particularly anecdote from this time recalls when Val met director Warren Beauty’s children. He thought dressing up as Batman would entertain them. It did, but instead of asking him questions, the children were merely obsessed with trying on the outfit themselves – Val realized that it was the suit that made the movie, not his acting.

Fast forward to 1996 and Val’s life was changing drastically. He and wife Joanne Whalley had welcomed a second child, their son Jack, in 1995, but they stunned fans a year later by announcing their divorce after eight years of marriage.

“You just don’t understand humility until you have children and get divorced,” Val told Elle magazine.

“I was very hurt and very angry and so was she. But when kids are involved, you either become friends with respect or you become mortal enemies.”

Val moved on, but his lust to play serious, challenging characters only continued to ferment. He was reportedly so fed up with playing Batman that he refused to appear in the two sequels he was contracted to, instead opting to perform alongside Robert De Niro and Al Pacino in Heat.

The refusal was the straw that broke the camel’s back with regards to Kilmer’s reputation among the powers that be in Hollywood. Already an actor who was said to be difficult to work with, his roles dried up after Heat. The man who had been one of the most burgeoning stars of the ’80s and ’90s soon found himself on the wrong side of the sliding doors.

For Val himself, however, this was actually something of a relief. He was now free to pursue projects he wanted to do, rather than being pushed into roles in line with his action-hero image.

Of course, his life hasn’t been without it’s troubles, and as recently as 2015 he made headlines for altogether more concerning reasons.

Around this time it was reported that Kilmer had been hospitalized to receive emergency surgery on his throat. Two years later he would confirm to the world that he had indeed had throat cancer, and that his battle with the terrible disease – which included undergoing a tracheotomy – meant he could no longer speak naturally.

In heroic fashion, however, Val has pulled through and shown inspiring strength. He even managed to make a joke of his situation. When asked what he missed about his old voice, he replied:  “That I had one! That I didn’t laugh like a pirate.”

These days, Val is gearing up to reprise his role as Iceman in Top Gun 2. Tom Cruise will also return as Maverick, in what fans hope will be a blockbuster every bit as exciting as the first.

With a career spanning five decades at the top, Val has proven his staying power. Whatever comes next for the 60-year-old is sure to be a challenge that he’ll embrace with open arms, as is his way.

Man I miss the days when Val Kilmer was a blockbuster attraction, but I never knew he didn’t love playing those huge roles he was cast in.

Here’s to wishing this legendary actor all the very best moving forward, and a clean bill of health for the next few years!

Share this article on Facebook if you hope to see Val Kilmer back on the big screen soon!