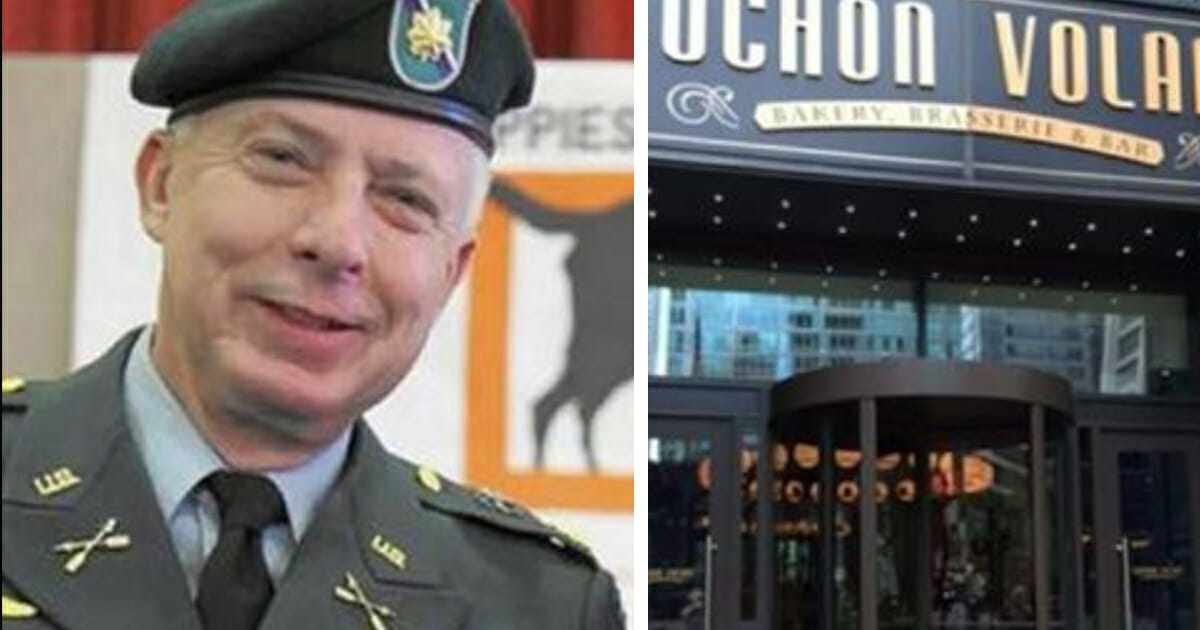 When one of our soldiers has returned home from war, it’s important that society as a whole helps them to ease back in to normal life.

This is more pertinent than ever when it comes to those serving men and women who are suffering from PTSD. The condition can affect anyone exposed to traumatic experiences, and can take a good deal of time to get over.

Sadly, Major Diggs Brown wasn’t afforded the concession he needed when he sat down to have breakfast in a restaurant in Chicago. A 30-year veteran of the Army, he suffered from PTSD upon returning from Afghanistan. At one Cochon Volant on West Monroe Street, however, he was given a somewhat rude ordeal …

As a result of his PTSD, Major Brown’s service dog Arthur has been his ever-present companion for years. It’s no surprise then that Arthur was present when Major Brown went to have breakfast one day.

Upon entering the restaurant, he was greeted by a waitress who showed him to his table.

“When my service dog and I walked in, the hostess took us to the table, and the young lady named Hannah, she said you can’t have a dog in the restaurant,” Brown said.

Keeping his cool, Brown told her that Arthur was a service dog, and that the Americans with Disabilities Act states he can go wherever Brown goes.

Eventually he was seated and placed his order, but it wasn’t long before Hannah came back again. She asked him to leave the establishment again, to which he repeated that she would be violating the law by kicking him out simply because of Arthur’s presence.

Hannah replied: “I don’t care, you need to leave, we don’t have dogs in the restaurant.”

Arthur felt embarrassed, but nevertheless acquiesced and left, heading back to Fort Collins by way of a plane.

“He does a lot of things,” Brown said of Arthur. “He wakes me up from nightmares when I have them. When I have anxiety attacks, he calms me down. He saved my life and I’m even off the drugs.

“When I got home, I posted to my Facebook page, this is what happened to me and it went viral,” he explained.

Needless to say, Brown’s story went viral quickly, with thousands agreeing that he was completely in the right. As per the Americans with Disabilities Act of 1990, service dogs are permitted in all places where a member of the public can go, with very few, special exceptions.

Unfortunately, clearly not everyone is aware of this – or at the least not prepared to respect it.

Luckily, Brown’s story had something of a happy ending. The manager of the restaurant called Brown personally and emailed him an apology. Taking to Facebook, they said: “The Cochon Volant family is both saddened and disappointed to hear this account of a veteran’s experience.

“Not only are we 100% aware of and in compliance with all ADA regulations regarding service dogs, we also have an acute appreciation for the service of veterans and we are happy to welcome staff members and employees who have honorably served this country.”

As for the employee who asked Brown to leave, he also shared his thoughts on her.

“I really hope this young lady isn’t fired for this, she just needed to be educated,” Brown said.

It’s important that this story gets as far and wide as possible, in the main so that more people are aware of the laws regarding service dogs. It’s our hope that no veteran is again wrongfully removed from an establishment!

Please help us by sharing this article on Facebook.