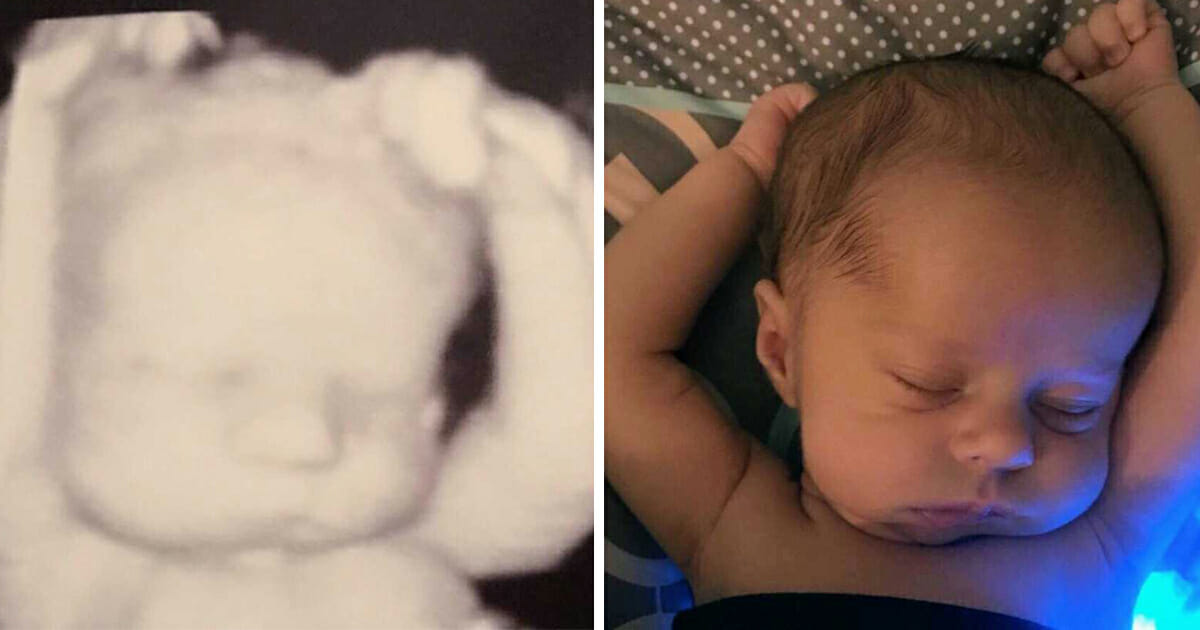 Our children are our greatest source of joy and inspiration, and as such there’s nothing else that can make us equally as happy. When I think of my own children I get a warm feeling in the pit of my stomach. When I see them smile the world is put to rights.

Of course, the other side of the coin is that such a powerful emotional bond has the power to also create feelings of anger, sadness, or worry.

No day is the same when you have kids … I guess that’s part of the beauty.

When new mom Sarah Kelleher Steppling noticed something coincidental about her son’s sleeping position, she knew she had to share the discovery. She had no idea how many people would be fascinated by the find.

What she shared on social media:

“The first ultrasound we had was done at 18 weeks, and it got all the bone structure, so he looked just like Skeletor or the Krampus! So when I saw this sweet baby-faced image that was taken at almost 39 weeks I did think it was adorable, but frankly, I was just glad he didn’t have horns!” Sarah told Love What Matters.

She added: “It’s unusual to get such clear images that late in the game, but the woman doing the ultrasound really knew her way around a uterus. We were super happy to get such great images..

“I didn’t immediately make the connection to the ultrasound when I first noticed he slept with his arms up. I saw the ultrasound hanging on my mother-in-law’s fridge when he was several weeks old and that’s when it hit me.

“He still does that! He is the king of taking it easy.

“I made the side by side comparison and was amazed by how similar they were in every little detail. I decided to post it to Reddit because I thought it was interesting content someone else might enjoy seeing.

“Also, it’s nice to communicate with the outside world after countless days inside nursing a newborn. Sometimes it feels like nothing exists except for me, my baby, my boobs, and the couch!

“Having my son has been life changing. I just look at him and start to cry sometimes because I love him so much. He’s a chill little dude. Keep him fed, changed, and cuddled and he’s happy.

“My mom says my husband Ross and I don’t know how lucky we got with him.”

“He had unexplained hemolytic anemia and severe prolonged jaundice for the first month of his life, which is why he’s resting on that blue light. We had doctor visits every 1-2 days to monitor his blood and a 48 hour stay at the children’s hospital, but he took it all like a champ.

“Every time he smiles at me I melt.”

Pretty sure no one switched the baby at birth.

Since Sarah’s son developed his arms he has slept in the same way. It’s incredible that she has evidence of her son’s sleeping habits from inside her womb. What a little sweetheart!

We can tell by these photos that Mommy’s little boy is going to be the king of taking it easy for the rest of time. He’s certainly got good form!

Share this article with your friends on Facebook so that more people can see this incredible photo!