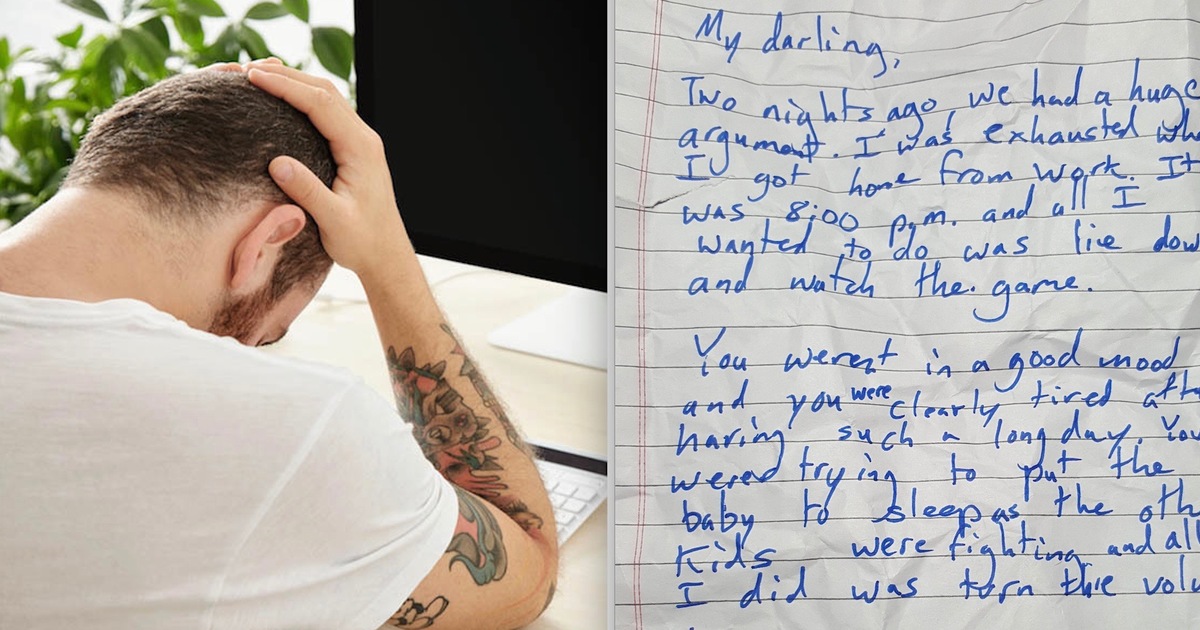 After a long, stressful day at work, a man went home exhausted to his family.

All he wanted to do was sit down in his favorite chair and watch his favorite team play football. He didn’t want to be disturbed by his kids or help his wife do any chores.

This upset his wife to no end and the couple got in a big argument.

It had happened before, but this was the last straw and the man’s wife stormed out of the house.

She didn’t come home that night, or the next morning, either.

The man’s world collapsed and suddenly he had to take care of himself. After two days alone with his kids, the man found a moment to sit down and write this letter to his wife:

Two nights ago, we had a huge argument. I was exhausted when I got home from work. It was 8:00 p.m and all I wanted to do was to lie down and watch the game.

You weren’t in a good mood, and you were clearly tired after having a long day. You were trying to put the baby to sleep as the other kids were fighting, and all I did was turn the volume up.

“Would it kill you to play a more active role in your children’s upbringing?” you asked, turning the television volume back down. “You can help out more around the house, too.”

“Hey,” I said defensively. “I work hard all day just so you could play in the doll’s house all day.”

The argument just kept going like that. I said terrible things to you that I can never take back, and you screamed, saying that you were sick of it all. So you tearfully ran out of the house, leaving me to take care of the children on my own.

I experienced the crying and the tantrums.

I experienced having to run around so much all day that I didn’t even have a chance to shower.

I experienced being forced to heat the milk, getting the kids dressed, and cleaning the kitchen all at once.

I experienced being cooped up all day without speaking to an adult.

I experienced the inability to sit calmly at the table to have a relaxed meal whenever I wanted, because I had to run after the kids.

I experienced feeling so physically and emotionally drained that I just wanted to sleep for 20 hours straight, but had to get up a few hours after falling asleep because the baby was crying.

I lived two days and two nights the way that you do, and I think I get it now.

I get your exhaustion. I get that being a mother is all about sacrifice.

I get that it is more tiring than being among corporate bigwigs for 10 hours and making economic decisions.

I get how frustrated you must be to have to sacrifice your job and financial freedom so that you can provide for your children.

I get how uncertain you are about the fact that your economic security now depends on your partner and not just you.

I get how hard it is to not be able to hang out with your friends, exercise, or get a good night’s sleep.

I get how challenging it is, being locked up and being forced to to watch the children while imagining what you must be missing in the outside world.

I also get that you become upset when my mother criticizes how you choose to raise our children, because nobody in the world knows what is best for children like their own mother.

I get that being a mother means carrying society’s greatest burdens. Being the person that nobody appreciates, values, or remembers.

I write you this letter not just to tell you that you are missed, but additionally because I don’t want to go another day without telling you:

“You are strong, doing an excellent job, and I admire you.”

This letter has been circulating on the internet for a while, and it’s a wonderful tribute from a man to his wife. He never understood what an unbelievable job she did before he was forced to put himself in her shoes.

I hope everyone who reads this understands what an important job it is to stay home and take care of the children.

Please share if you also think that moms deserve all the praise in the world!