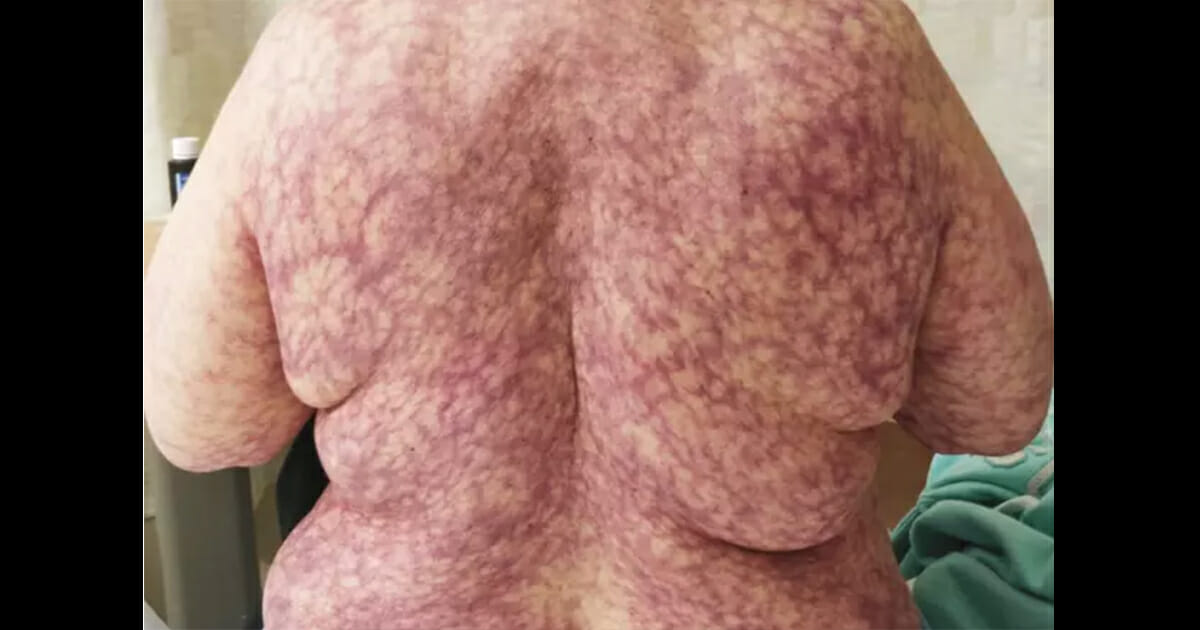 Details of a woman’s rare blood disease have been published in a report in the New England Journal of Medicine, after she broke out in a large, purple, web-like rash.

According to reports, the 70-year-old, from upstate New York, went to see doctors after feeling dizzy for a week. She’d also developed a peculiar rash that was quickly consuming most of her back.

The New England Journal of Medicine explains that her symptoms began after the onset of a viral respiratory tract infection two weeks previous.

After doctors examined the woman, they determined she was suffering from livedo reticularis, a condition – according to Speciality Medical Dialogues – believed to be caused by spasms of the blood vessels and poor circulation close to the surface of the skin.

The result is that the skin can take on a mottled, web-like pattern, as evidenced in the image below:

The patient in question was then looked at by Dr Konika Sharma and Dr Anush Patel from the Bassett Medical Center in Cooperstown, who took blood samples.

They diagnosed her with cold agglutinin disease, a rare autoimmune disease that affects people when their skin is exposed to cold temperatures. It’s said the woman’s skin had reacted adversely to a recent spate of cold weather in New York, where temparatures had reached as low as –9°C.

Hospitalized for a week, she was nursed back to health by way of blood transfusions and keeping warm.

The report in the New England Journal of Medicine read:

“A diagnosis of cold agglutinin disease, a form of acquired autoimmune hemolytic anemia, was made, a condition that may have been exacerbated by the patient’s recent viral infection along with the cold weather in upstate New York, where the temperature was 15°F (−9°C) at the time of her presentation.”

“The patient was warmed and treated with blood transfusions and rituximab for one week.

“At the time of hospital discharge, she had a hematocrit of 30% and a reduction in dizziness, but the rash persisted.”

I’ve certainly never seen anything like this, nor would I have thought it possible! We’re glad the woman in question is making a recovery.