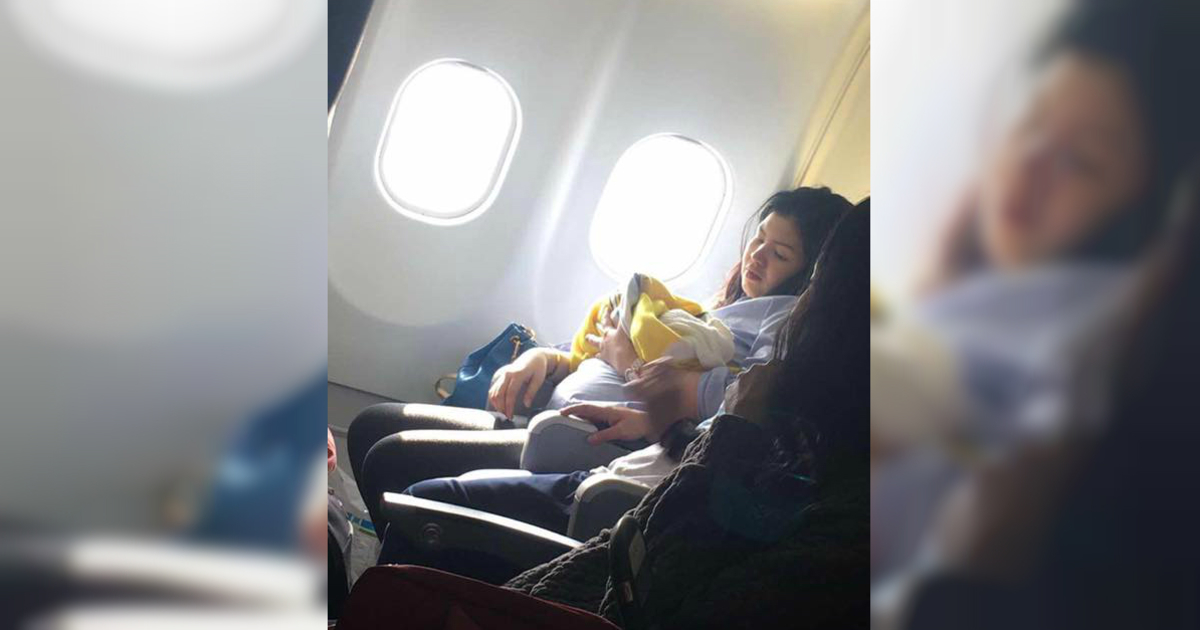 Everyone has a difficult flight now and then—you get sick from the recycled air, feel dizzy when your blood sugar gets too low, or have to endure an ungodly amount of turbulence. But nothing compares to this woman’s experience on a flight from Dubai to the Philippines…

On a recent Cebu Pacific flight from Dubai to the Philippines, a passenger had something happened to her that she never could have expected. She gave birth! The woman was seven months pregnant when she unexpectedly started having contractions five hours into the flight.

The flight attendants called for assistance, and luckily there were two nurses on board. And with the nurses help, the woman gave birth to a beautiful little girl named Haven. Afterward, the plane made an emergency landing in India before finally landing nine hours late in the Phillipines. The other passengers didn’t seem to mind though, as they got to witness a little miracle. And the airline responded by offering the newborn the best baby shower gift ever—1 million air miles!

One passenger on board, Missy Berberabe Umandel, saw the whole thing and wrote about her experience on Facebook. Now her story has gone viral and it’s easy to see why. Talk about a dramatic flight! Read about this amazing birth below.

Had the most ‘NORMAL’ flight ever with Cebu Pacific Air. A woman near our seat gave birth to a healthy baby girl, on our flight from Dubai back to PH. We had to do an emergency landing in India to ensure the baby’s safety. All flight attendants, pilots, and passengers were very attentive too. Very lucky baby..

Since she was born in a Cebu Pac plane, she is awarded 1,000,000 Get Go Points from the airline (STILL pretty much the equivalent of free flights for a lifetime, I mean she could be living in the plane if she wished). Congratulations to the first-time Mom and Grandma! This is something you don’t get to see everyday. It only happens in movies, and we’re lucky to witness this miracle.

*I would like to disclose that this might not be the EXACT story because I am a mere bystander. I am also sharing this story purely because I find it very inspiring, but I never intended it to go viral*

The lady started having contractions mid-flight, about 5 hours in going to the Philippines. She was set to give birth on October, so this came to a surprise, even to her mother who picked her up from Dubai.

For once in my life, I saw flight attendants, who are meant to always maintain their poise and composure, panic ever so slightly. Flight attendants started calling for medical assistance, and luckily, there were two nurses among the passengers.

She was already crowning, so she was brought to the more spacious area in front of the plane. We only heard one semi-loud screech, and a few seconds later, there were tinier, cute screeches, and it was when we knew the baby was born. Luckily, she only had to push ONCE.

Moments later, the woman got up to go back to her seat, baby in arms (mighty strong, I might say).

There were 2 other babies with us in the front row, and one of the passengers had a suitcase full of infant clothes and necessities, which could not have come at a better time. The flight attendants took a shelf from the cabinets and filled it with mineral water, which became a makeshift wash basin to clean the baby in.

It was immediately decided that an emergency landing in India was necessary to ensure the baby’s health, as it was born 2 months earlier than expected.

Flight was delayed once again (what was supposed to be a 9-hour flight became roughly 18 hours), but no complaints.. everyone in that plane was blessed.

To the woman, in the hopes she gets to read this: we understand you are resting and giving time to take care of your baby, but we are all hoping for your quick recovery and a lifetime of happiness to your beautiful child! And Mom, this experience made me appreciate you so so so much more than I already do. When my future children ask me what my greatest memory with my mother was, I would tell them of this extraordinary moment we shared.

On a side note, for those curious about the child’s citizenship: there is an existing rule of when a child is born mid-air, the baby will hold citizenship of the country the plane lands on next. While this rule still applies in USA, it has been revoked in most countries, including the Philippines. Instead, this particular baby’s birthplace is India, but she will still carry a Philippine passport (since Cebu Pacific is a Philippine airline). Her time of birth also follows India Standard time.

Mom, this is the highlight of our short leisure trip to Dubai, fo sho

Talk about an amazing flight! Share with your friends and family if you agree!