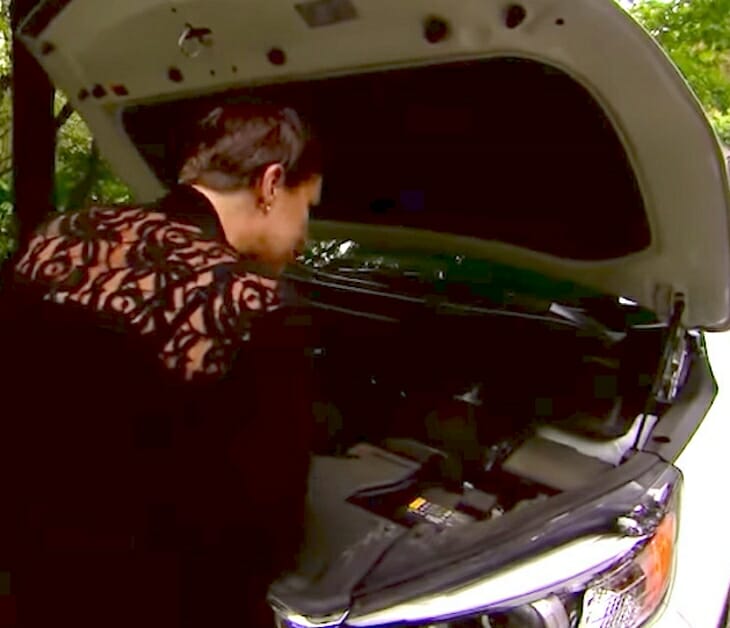 Before taking a trip to a mechanic, many of us will try and solve our car troubles at home.

I’m no different – I always try to think of saving money before paying someone else to fix things I might be able to do myself. The truth of the matter is that this has worked for me on plenty of occasions.

Mother of four Alon Abare was of that mindset when her car broke down.

She stopped, turned off the engine and opened the hood.

She had no idea this simple action would change her life forever.

After a lengthy period of depression, Alon has opened up about the accident that changed everything. Her aim is to warn other people to pay attention to the small detail she overlooked. Having read it, I agree this is a lesson people need to be taking heed of …

It all started when Alon noticed her car was having problems. Unfortunately, she didn’t have money to spare on a mechanic.

And so she did what we all would; she opened the hood and took a peek inside.

She was simply trying to see if she could discover the issue herself. What she didn’t know is that her life was in danger.

The moment she leant towards the engine, she felt a sudden, indescribable pain tear through her body.

She had no idea what had happened, only that it was the worst pain she had ever experienced in her entire life.

Fortunately, her children heard her screams and came running to help. Without their quick thinking, Alon could have died from her injuries.

Alon was immediately rushed to hospital. Once there, doctors informed her she had made a mistake that could well have ended her life. It was something trivial; something she hadn’t even considered before peering inside the hood.

The mistake was one easily made, so now she’s warning other women before it’s too late.

Alon, who is set to undergo many surgeries and transplants, knows it will take a long time for her to recover – both physically and mentally.

The incident has cost her obscene amounts in medical bills. But the worst of it all for her? She almost left her children without a mom.

Alon will never make the same mistake again. Unfortunately, though, there are others who could well be involved in a similar accident.

You can watch all about said mistake in the video below. It’s a lesson you definitely don’t want to miss, especially if you’re a woman, or a man with long hair.

Please share this story with all your friends so that you can prevent it happening to them.