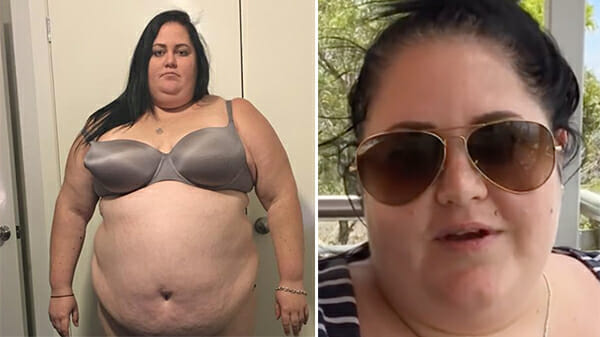 Sometimes in life we need a huge wake up call to force us into action.

For Elena Goodall of Australia, who weighed almost 397Ibs, that alarm clock was doctors telling her that her life was in danger.

She made an instant decision to change her life for the better. Here’s how she did it …

Elena Goodall’s life was far from healthy. The Australian was 405Ibs at her heaviest and her well being had reached a critical stage.

Elena ate so much, so often, that one day she was so big she couldn’t bend down to tie her own shoe laces, nor even get to her feet. She went to the doctors, and it was there that she would receive a serious message that would change everything.

The doctor told her in no uncertain terms that she was at risk of dying because of her size.

Elena decided to change her habits completely. Shortly thereafter, she began a journey that would morph her life so that it was virtually unrecognisable.

After undergoing gastric sleeve surgery, Elena drastically improved her eating habits and started to consume nutritious foods. She knew that her battle would in no way be easy or painless, but, irrespective of the trials and tribulations, she had no choice but to press on.

Striving to live a healthier lifestyle wasn’t enough for Elena, however. As the ultimate objective, she set the goal of being able to complete an entire triathlon.

Fighting against the odds

In addition to running and going to the gym, she started swimming in preparation for said triathlon. Then she began to incorporate the bike into her regime, taking spin classes and continuing to put the work in.

Of course, it was an arduous struggle to work out as much as she did, but she was motivated with the knowledge that it would all pay off. The training she underwent took a toll on her body, but slowly and surely the changes became apparent.

One year later, she had achieved what no one thought possible.

Elena relished the fact that she could watch her own transition.

Merely one year after beginning her fight, she accomplished the unthinkable.

Elena entered into the “Ironman Cairns” triathlon competition and successfully finished it.

All told, she swam 2.4 miles, ran 4.2 miles and covered an incredible 18 miles on a bike. An incredibly impressive feat!

Today, Elena has lost half her body weight since she took the first step of her journey. She now weighs just 165Ibs and regularly uploads pictures from her workouts and everyday life to Facebook in a bid to inspire thousands of people all over the world.

Elena was able to do something that seemed utterly impossible. She’s a true fighter who managed to change her life forever, and for that she deserves praise.

Always remember; nothing is impossible for those who want it badly enough – that’s certainly something Elena has proven.

Don’t hesitate to share this remarkable story with all your friends and family on Facebook. Let them, too, be inspired by Elena’s fantastic turnaround.