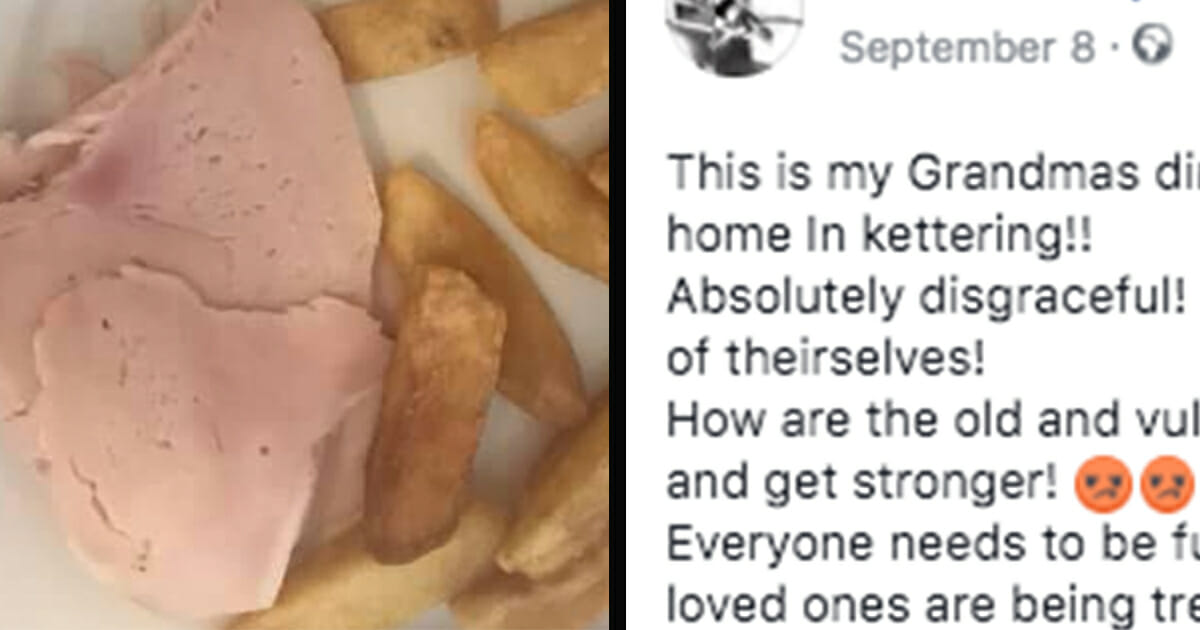 When we think of our moms, dads, grandpas and grandmas being in nursing homes, we like to think they’re being given a safe and comforting environment where they don’t have to worry about their needs being met.

The majority of the time this is the case; nursing home staff are friendly, compassionate and care about those they look after.

Sadly, it’s not guaranteed. One young woman’s Facebook post has gone viral for all the wrong reasons after she shared the poor excuse for a meal her grandmother was served whilst recovering from a serious operation …

Mary Thompson, a 79-year-old woman who is a resident at Claremont Parkway in Kettering, Northamptonshire, England was served what looks like frozen chips and a slice of ham for her dinner – this when she was on the road to recovery after an operation.

Her granddaughter, Elisha, took to Facebook to share her fury at the ‘meal’, stating that the care home should be “ashamed of themselves”.

Needless to say, it wasn’t long before Elisha’s message was noticed by more than just her social media friends. Her original post has now been shared 60,000 times, with people in the comments section boiling over the fact that the home thought it was acceptable fare.

The post reads: “This is my Grandma’s dinner from Claremont care home In Kettering!!

“Absolutely disgraceful! They should be ashamed of themselves! How are the old and vulnerable meant to survive and get stronger!

“Everyone needs to be fully aware of how our loved ones are being treated!

This is my Grandmas dinner from Claremont care home In kettering!!Absolutely disgraceful! They should be ashamed of…

As per British newspaper The Sun, Mary Thompson had told staff that she wanted ham, egg and chips for her dinner. She was then handed ham, chips and beans, before having her plate returned as above when she informed them she couldn’t eat beans.

Mary’s daughter Diane said: “They were obviously frozen chips and they’d been re-heated. There was no potato in them – they were just shells.

“We asked where the egg was and were told they’d run out – yet there’s a Tesco just over the road.

“I told staff the meal was disgusting, there was no way my mum was going to eat, so they took the plate away and returned again – this time with just a pile of chips.

“I asked where the ham had gone and was told ‘it’s just sandwich ham, she won’t want that anyway.”

It’s important that we never forget our elders in society, especially not when it seems people are prepared to cut corners regarding their care. We hope the nursing home in question have learned their lesson and won’t attempt to pass off food like the above as a proper dinner.

This could easily have been my grandma, or yours. The truth is it’s not acceptable and those responsible need to be held to account.

Share this article if you’d never allow your grandma or grandad, mom or dad, to be served this for their dinner.