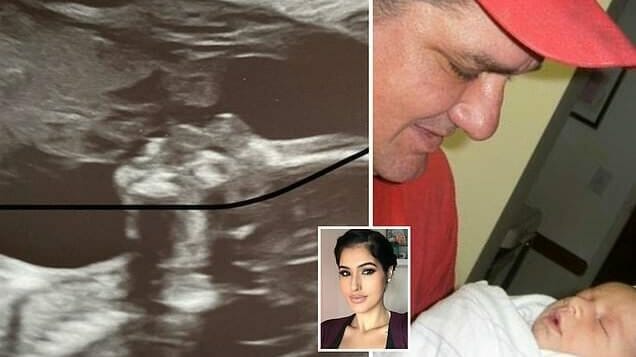 For me, it feels like miracles miracles happen each and every day – but they may not always be recognized as such. Because around us, life bursts with mysteries – a glass of water, a ray of sunshine, a leaf, a caterpillar, a flower, laughter, raindrops – or a detail in an ultrasound.

Now a California mom claims that her ultrasound scans show something stunning, that’s a little hard to believe.

At first, Shantel Carrillo, 30, thought she was the only one who saw it – but when she showed it to her friends and family, her family couldn’t help but point out one thing:

“Right when I posted it, like 30 seconds later, somebody was like, ‘There’s an angel kissing your baby,'” Shantel told NBC San Diego.

Shantel is convinced that you her deceased father, Cuck, is kissing her unborn daughter on the ultrasound pictures.

The figure on the ultrasound is very similar to her father, who died in 2016.

‘It has his nose, his little chubby cheeks, his little double chin, and my dad was wearing a hat all the time. It looks like the bill of his hat and his lips are just touching hers so perfectly, ‘Shantel told ABC10.

Shantel posted the photo on social media along with a photo of her dad and Shantel’s first-born daughter. According to Shantel, her beloved father would have been overjoyed to be a part of her grandchildren’s life.

She adds that the detail on the ultrasound could be her placenta, but Shantel is still proud and happy with the pictures, which she thinks gives an extra dimension to her pregnancy.

Her daughter is scheduled to arrive in April – the same month her father was born. Is it a coincidence or not?

I don’t know what to believe, but it feels like Shantel’s dad watching over his grandchild, and I have to say that the images from the ultrasound are very similar to a human face. What do you think?

If it brings some sort of comfort, great for her. Wishing her the happy healthy baby and I’m sure her late father will be really proud 👍