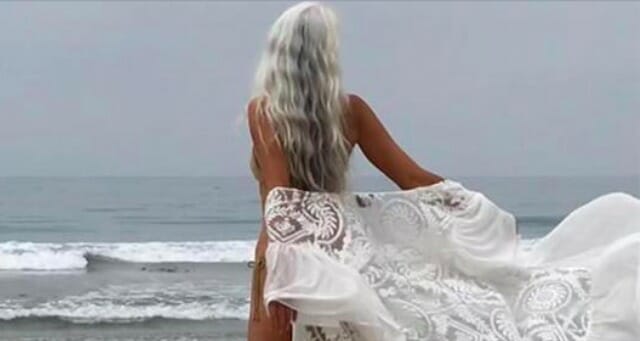 I am full of admiration for people who prove that age is just a number.

Whether the person climbs mountains, bikes, plays computer games, it warms my heart when I see elderly people challenging the general idea that age plays a role.

This woman has been called “the world’s most beautiful grandmother” for years, which may not surprise you when you see what she looks like. But she is also a perfect example of beauty not being tied to youth.

Yazemeenah Rossi has been on magazine covers from around the world. But the French model did not begin her career in her teens, like most models do — she was already over 30 when she started.

Unveils secret of her beauty

Already then, Yazemeenah was proving that she did not have to be young to be a model — something she would continue to prove over the next 30 years.

Quiet room with view in the center of Paris …

Although she managed to work continuously as a model during all these years, she says that the model industry remains primarily for the young.

“There was a time, some years ago, when I started to think things would gradually begin to change and we’d start to see more older models, but that did not happen. I do believe that men and women have the same concerns about growing old, although men might talk less about it. Nobody likes to see their skin give in to gravity. At the same time, growing old is something beautiful because you become stronger with the passing of time,” Yazemeenah told Vice.

“Age is definitely a state of mind. If you are connected with your inner child, you can recharge your batteries and keep that energy. You need to have a playful, adventurous, curious spirit,” she says, adding there are no real “magic tricks” to keep you looking youthful.

Y by Y in St Cyprien … Balance with a mini bikini @dolcegabbana and a 99cts store hat .

“I haven’t had any cosmetic surgery so far. The idea of going under the knife when I am perfectly healthy doesn’t make much sense to me.”

Something different for Valentines… Grey Blue with Perles embroidery ?Preview of the beautiful swimsuit collection @taramatthewsbikini With great Corsican project in perspective . These are stills from a video on Iphone7+ no filter, no retouching. Self portrait. . . . . . . . . #swimsuits#iphone7plus #stills#from#video#nofilter#noretouch #fitbody#over60#yogabody#yogalover#bikini#greyblue#embroidery #classic#elegant#comfortable #suntanned#malibu#california#usa#corsica#whitehair#longhair#naturalhair#sunglasses#burberry #

“I take oil and use it on my skin. I put rapeseed oil on my hair. I scrub my skin once a week with olive oil and fine sugar, and I eat an avocado a day and organic meat and fish,” she told The Potion Tree.

Y by Y raw no make up … had some fun with myself trying this new camera that I waited a couple of month to get … These are Raw from Nikon D 850, 24 /70 , 2.8 , manual setting , 64 Iso at 125 aperture 2.8 no retouching, no filter, WN Neutral tone . .file is 130 mb here reduced at 9 . Self-portrait . . . . . . . #test#nude#raw#noretouch #nofilter#nikond850#natural #naturallight#daylight#naturalbeauty #nomakeup#bareskin#originalapparel#fun#mynewbody #happy#malibu#california #usa#selfportrait#autoportrait#over60#influencer#

This woman is really a source of inspiration. Press the share button so your friends can also see that age is just a number!