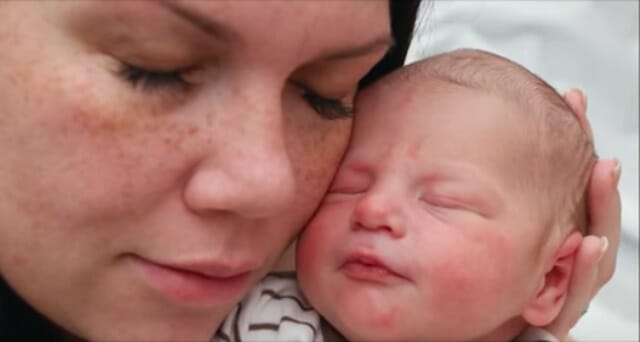 The joys of childbirth are like no other. Holding your new baby in your arms is a simply overwhelming experience. “It changes the center of your gravity,” a co-worker once said to me. The words always stuck.

Our instinct is to love and protect our babies with all our heart. Parents do everything they can to prepare themselves for the big moment of welcoming a tiny new life into the world. And there’s no doubt the challenge is daunting.

For one couple, despite all the love in the world and months of preparation, things took an unspeakable turn. Now they are making their story public in the hope that their tragedy doesn’t befall a single other couple ever again.

First-time mom Jillian Johnson and her partner couldn’t be more thrilled to find out they were pregnant. They did everything to prepare for the arrival of their son, Landon, and educated themselves extensively.

Landon was born healthy but just a few days later, the unspeakable occurred: Landon passed away suddenly from a cardiac arrest — as a result of dehydration.

It has taken Jillian five years to share her story, but she is hoping her account helps prevent this unbearable loss from hitting any one else.

In a blog post, the devastated mother described how she accidentally starved her baby to death.

“We were ready! Or so we thought…. Every class and book was geared toward breastfeeding and how it’s so important if you want a healthy child. Landon was born in a ‘Baby-Friendly’ hospital. (What this means is everything is geared toward breastfeeding. Unless you’d had a breast augmentation or cancer or some serious medical reason as to why you couldn’t breastfeed, your baby would not be given formula unless a prescription was written by the pediatrician.)

Landon was on my breast – ALL OF THE TIME. The lactation consultants would come in and see that ‘he had a great latch and was doing fine’ but there was one who mentioned I may have a problem producing milk. The reason she gave was because I was diagnosed with PCOS (polycystic ovarian syndrome) and it was just harder for women with hormone imbalances to produce milk.”

But no matter how much she fed Landon, he cried constantly. Jillian nursed him for about nine hours on his very first day of life, what nurses referred to as cluster feeding. But despite this, it just felt he was not getting enough milk. And sure enough, he wasn’t.

Jillian was unknowingly quite literally starving her baby. At less than three days old, Landon went into cardiac arrest as a result of dehydration. He was put on life support but died several days later.

It turns out that Jillian had not been producing enough ‘colostrum’, a thick, concentrated fluid that is often golden in color and typically comes in during late pregnancy. While vary rare, some women don’t produce enough colostrum in the first days after childbirth.

“The best advice I was given by while he was on life support is sure breast is best, but follow with the bottle. This way you know your baby has eaten enough….if only I could go back in time,” Jillian wrote.

What to Look Out For

Pediatrician Rachel Prete with told Parents.com suggests moms look for colostrum themselves to make sure the baby is getting fed.

“Moms should be able to hand-express some colostrum. A minimum of a teaspoon (or 5 milliliters) per feeding is enough,” she said.

Moms are encouraged to look out for the following warning signs that their baby may be dehydrated:

Watch a moving memorial slideshow of tiny Landon below.

Let’s honor Landon’s memory. This was an absolutely devastating mistake, but Jillian deserves all the support in the world through this rough time. We admire her courage for coming out and speaking about this despite how difficult it must have been. Please share her story to ensure every single parent out there is aware of this risk.