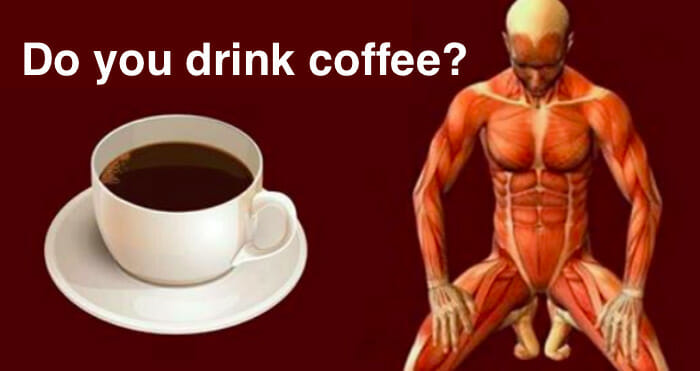 I’m quite sure I’m not the only coffee fanatic out there. Whether it’s comes in the morning, as an afternoon break or to consume after a delicious meal — I believe that a delicious cup of coffee is undoubtedly among the best things life has to offer.

For many of us, it’s hard to start the day off without a good cup of coffee — in addition to helping us wake up, the powerful brown potion gives us a precious boost of energy.

But do you know what happens to your body when you drink coffee every day?

Do you start the day with coffee and something sweet?

Studies have shown that this can improve your learning capabilities, help your brain focus and improve memory.

Researchers at the University of Barcelona have shown that the brain works more efficiently when ‘under the influence’ of caffeine alongside some glucose.

If you’re concerned about cardiovascular health, you may want to try drinking 3 cups of coffee a day.

Researchers have studied the correlation between cardiac arrhythmias and caffeine intake.

The result, which was published in JACC: Clinical Electrophysiology, revealed a correlation between many of the 230 000 test subjects. Among those who drank coffee regularly, the risk of atrial fibrillation was significantly less than for those who did not drink coffee as often.

A cup of coffee in the morning gives you more energy and helps you wake up. But did you know that it can also make you happier?

Drinking more than one cup of coffee a day reduces the risk of depression thanks to the substances’ antioxidants, according to researchers.

Italian scientists believe they know much coffee you should drink for the optimal effect against deteriorating memory.

Exactly one cup of coffee a day keeps Alzheimers’ away — but never drink more or less.

If you drink too much coffee, instead, the risk of mild cognitive failure doubles, according to the study that was first published in the Journal of Alzheimer’s Disease.

The researchers point out that the caffeine does not prevent Alzheimer and dementia, but keeps the disease in check.

American researchers conducted an experiment on a number of test subjects. They were handed either a cup of coffee or a cold drink before being presented to a stranger.

The result? Those who got coffee were friendlier towards the stranger and happier during their meeting with their new acquaintance.

7. Can help protect against cancer

Some studies suggest that coffee can reduce the risk of cancer, although nothing has been consistently proven just yet.

Among other things, one study revealed that with women who drank more than four cups of coffee a day, 22 percent reduced their risk of developing uterine cancer than with women who did not drink coffee at all, according to Live Science.

Researchers have observed how two of cups of coffee could make a difference for people who suffered from cirrhosis, i.e. poor liver function.

A total of nine studies and 430,000 participants were combined — the conclusion was that coffee drinkers had better protection against cirrhosis, especially among those who consumed alcohol.

Coffee is known to provide a certain protection against Parkinson’s disease.

Researchers at Linköping University in Sweden have also discovered a genetic variant that provides protection against Parkinson’s disease — especially if you drink a lot of coffee.

Now you know some of the many amazing effects that come with drinking coffee every day.

With how delicious coffee tastes, it’s sure hard not to be so happy about these incredible benefits.

If you don’t drink coffee at all, maybe you should consider starting with just one cup a day…?

Please share this information so that all your friends can discover the amazing health benefits of drinking coffee!