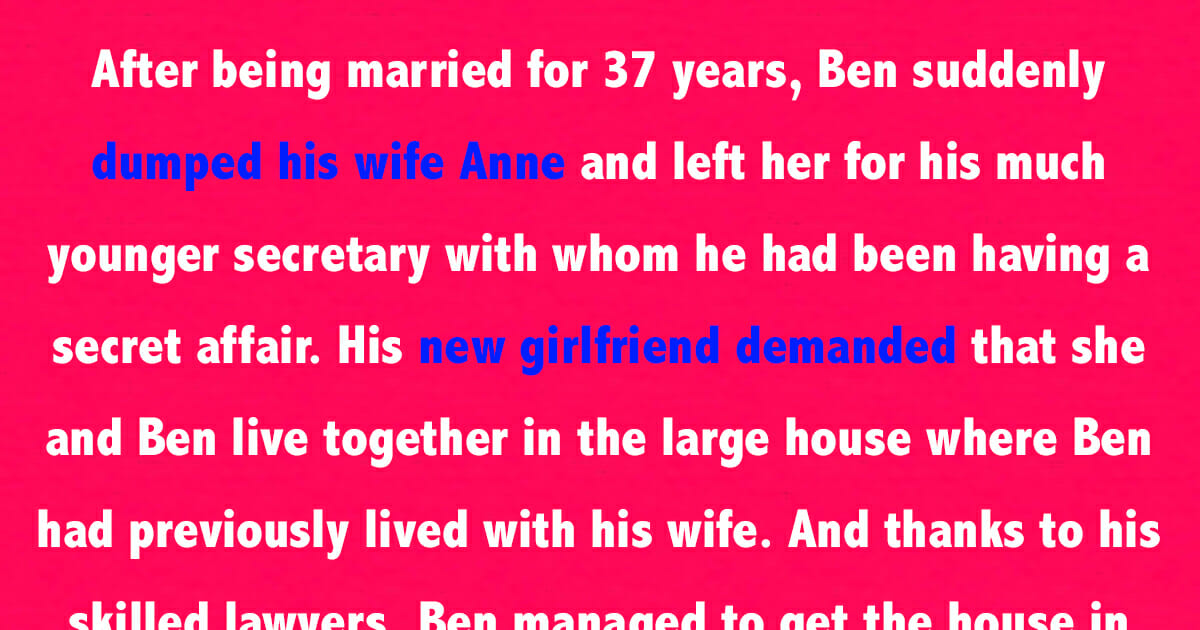 This is a clever story of revenge. It’s about a woman whose husband left her after 37 years of marriage.

He had an affair with his much younger secretary and made the decision to divorce his wife and move in with his new love.  But, his wife Anne was not going to make it easy for him to leave. This hilarious story deserves to be shared

After being married for 37 years, Ben suddenly dumped his wife Anne and left her for his much younger secretary with whom he had been having a secret affair.

His new girlfriend demanded that she and Ben live together in the large house where Ben had previously lived with his wife. And thanks to his skilled lawyers, Ben managed to get the house in the divorce. He gave his ex-wife, Anne, only three days to move out.

On the first day, she packed all of her stuff into boxes.

The next day, she called two moving guys who came over and moved all of her stuff to her new home.

On the third day, she sat down for the last time in the house’s beautiful dining room, lit candles, put on quiet music in the background, and enjoyed her meal.

After she finished eating, she went into every room in the house and stuffed leftover shrimp into the bottom of the curtains. Then she cleaned up the kitchen for the last time and left the home she where she had spent 37 years of her life.

When Ben moved into the house with his new girlfriend everything was perfect for the first few days.

But slowly, an unpleasant odor began to spread throughout the house. They tried everything: they cleaned and washed everything they could think of. They checked all the vents to make sure there were no dead mice and scrubbed every carpet in the house. They also installed air purifiers everywhere.

A company that specializes in getting rid pests came to the house and installed all sorts of traps to kill all possible insects and pests. But nothing worked.

After a while, their friends stopped visiting. Contractors refused to work in the house and the housekeeper quit.

In the end, they never discovered the source of the smell and decided it was better just to move. A month passed and although they lowered their starting price by over 50%, they could not find a buyer for their smelly house. The rumors of the smelly house spread and eventually even the local real estate brokers refused to answer when the couple called. They had to borrow a large amount of money from the bank to afford to buy a new home.

After a while, Ben’s called his ex-wife Anne to ask how everything was. He told her about the smelly and rotten house. She listened politely to what he said and then told him that she really missed her old home and that she would like to buy back the house.

Ben knew that his ex-wife did not know just how bad the smell was, and he agreed to sell the house to her for a tenth of what the house once was worth, but only if she was willing to sign the papers that day. She accepted immediately.

A week later Ben and his young girlfriend stood happily and flirted while the removal company took out all of their belongings to move to their new home. They were lucky to finally get rid of the smelly house, and Ben felt extremely pleased to have cheated his ex-wife in the deal.

The last items carried out of the house were the curtains.

I have read this one several times over the years but it never gets old. I think Anne is a genius!

Please share this story if you think this wife was clever!