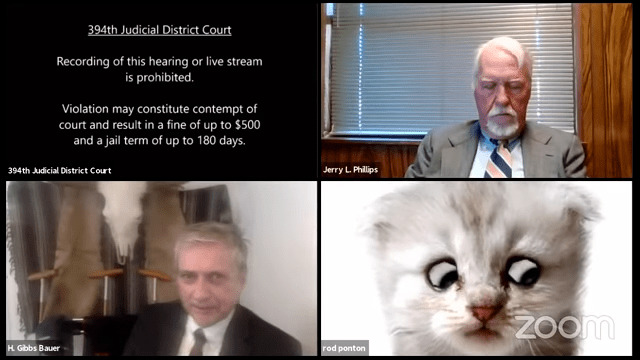 Ever since video filters became a thing on our phones and laptops, we’ve been using them to turn ourselves into animals.

From the ever-popular Snapchat dog filter and beyond, no selfie session is complete without it.

And given that cats are synonymous with the internet at this point, and Zoom has become the go-to choice for socially-distant video calls, it’s no surprise that Zoom does indeed have a filter that can turn you into a cat.

Just remember to turn it off when you’re done… or else you might end up in an important business not quite looking like yourself. That was the case in one hilarious viral video that’s being hailed as an instant classic.

Rod Ponton, a county attorney from Presidio County, Texas, logged on to a video hearing with the Texas’ 394th Judicial District Court, according to the New York Times.

But after signing on to the call, Ponton surprised everyone by… being a cat!

It was a bizarre moment as the lawyer’s face was mapped over by that of a sad kitten, whose big eyes looked around the screen, and its mouth moved to match Ponton’s words.

“Can you hear me, judge?” Ponton said, as the cat. His legal colleagues somehow kept their composure and calmly let him know the issue.

“Mr. Ponton, I believe you have a filter turned on,” Judge Roy Ferguson says.

Ponton, relatably, doesn’t know how to get the cat filter off and needs his assistant to help him.

As he scrambles to get things in order, he delivers what is probably the video’s most iconic line:

The video is currently the #1 trending video on YouTube, amassing nearly 5 million views in just a day.

Ponton told the Times that he was “mortified,” but soon his “older and less humorous face” appeared on screen and business went ahead as usual.

After learning he went viral — which happened pretty soon after the call ended — he had a good sense of humor about the whole situation.

“If I can make the country chuckle for a moment in these difficult times they’re going through, I’m happy to let them do that at my expense,” he told the Times.

“These fun moments are a by-product of the legal profession’s dedication to ensuring that the justice system continues to function in these tough times,” Judge Ferguson wrote on Twitter.

“Everyone involved handled it with dignity, and the filtered lawyer showed incredible grace. True professionalism all around!”

But maybe we’re not laughing at his expense as much as we’re relating to the whole thing pretty hard. After nearly a year of social distancing, we’ve all done countless Zoom calls, and yet none of us are experts — technical mishaps have become a daily part of our lives.

Maybe few of us have actually shown up in court as a kitten, but it still comes close to home.

To all animal lovers and people with kids, remember to turn those filters off before logging into work. We all love seeing people’s cats online, but not like this!