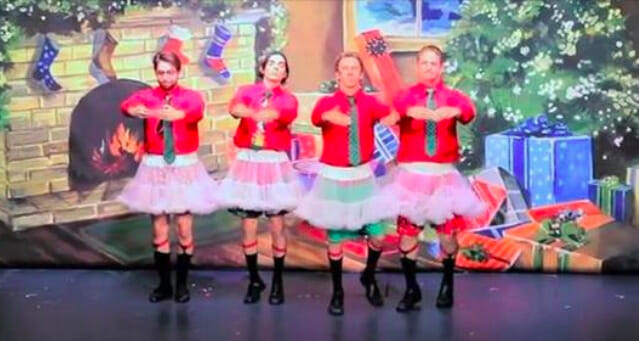 There’s nothing like a great sense of humor. Who doesn’t love to laugh?

There’s also just something about grown men in tutus dancing ‘ballet’ to the Nutcracker theme song that can get even the sternest person to crack a smile.

Don’t believe me? See for yourself below.

These four men sure know how to please a crowd. Their performance was part of Desert Star’s Nutcracker Ballet, which had more than your standard holiday favorites on offer.

These four actors really prove that and gave the crowd an experience they wouldn’t soon forget.

According to the routine’s choreographer, Allison Cox, the seemingly silly little performance was actually more work than it appears. The four men, who are actors and not dancers, had to be trained to dance — and while that wasn’t easy, it sure was worth it.

“This has been one of my favorite shows, even though it’s been more work for me,” Allison told Daily Herald. “The actors do a great job performing and really doing ballet moves while staying in character and making it very funny.”

The Nutcracker, of course, is one of the most performed shows around the Christmas season — but I’ve never quite seen it like this before.

The four men emerge on stage clad in little pink tutus — but it’s their moves that really get me. There’s just something absolutely hilarious about four rather ‘ungraceful’ men try to ‘elegantly’ dance ballet to The Nutcracker’s theme song!

The men hop and twirl around on stage simply hysterically, even carrying one another as if actual ballet dancers and revealing their colorful boxers.

Needless to say, the audience can be heard laughing until their sides hurt!

Watch the hysterical performance for yourself below.

Don’t be selfish! Share the Christmas cheer in this performance — and not to mention the laughs!