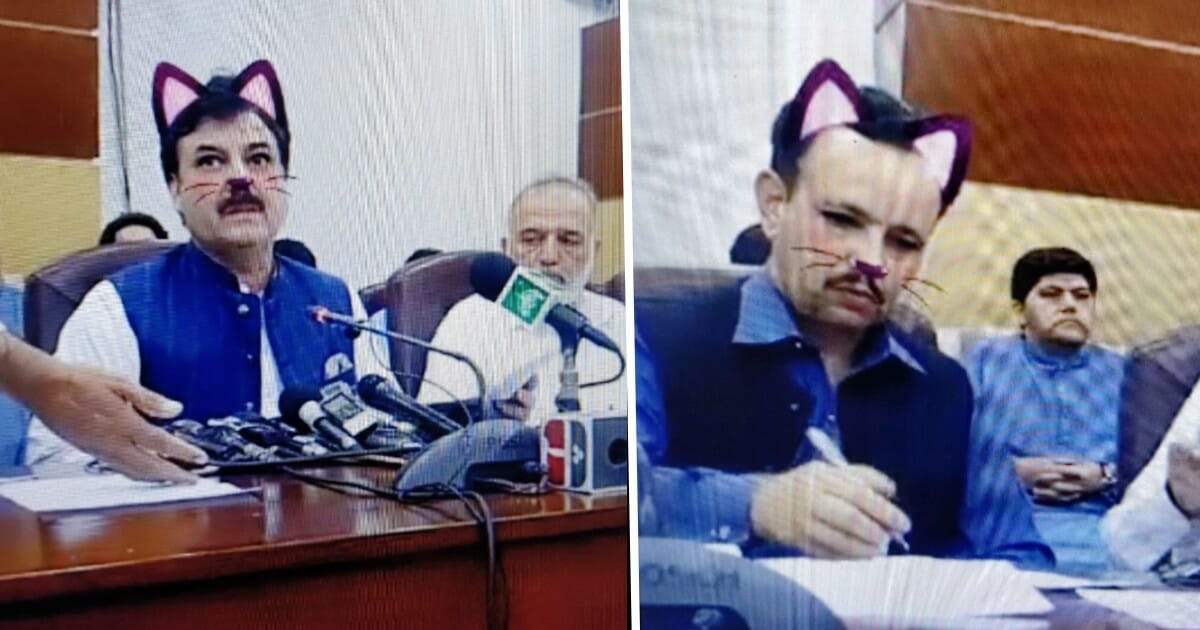 There’s nothing worse than getting ready for a meeting only to find out the audio and visual doesn’t work, but in the case of one Pakistani government official he may have wished the camera wasn’t working.

During a press conference, a silly Facebook filter was accidentally switched on, and it took several minutes before anyone corrected the mistake.

Shaukat Yousafzai, a Pakistani politician, was addressing journalists, an event that wouldn’t normally cause too much attention. But this time the press conference, which was streamed on Facebook drew a lot of attention, even internationally.

Someone inadvertently gave the regional minister cat ears and whiskers during the conference’s Facebook Live.

Of course it didn’t go unnoticed.

Those who happened to tune in took screenshots and cracked jokes at the hilarious moment.

What have this official PTI KPK Facebok page has done with KPK Information Minister Shaukat Yousafzai ? !
This is INSANE. @SAYousafzaiPTI pic.twitter.com/bttJt5FrdB

While viewers seemed to enjoy the gaffe, the social media team reacted and took the livestream down. They later issued a statement regarding the incident.

They acknowledged the cat filter and noted that it was caused by “human error.”

The Pakistan Tehreek-e-Insaf (PTI) party, which was responsible for the stream, stated it took “all necessary actions” to avoid future incidents. But it doesn’t seem like people would mind if it happened again.

Actually it made so many people happy. Let it happen sometimes

Despite the PTI’s reaction, Yousafzai didn’t seem to mind too much.

“I wasn’t the only one — two officials sitting along me were also hit by the cat filter,” he said jokingly, according to CNN.

What do you think of the incident?

Did it make you laugh or should politics be strictly serious?