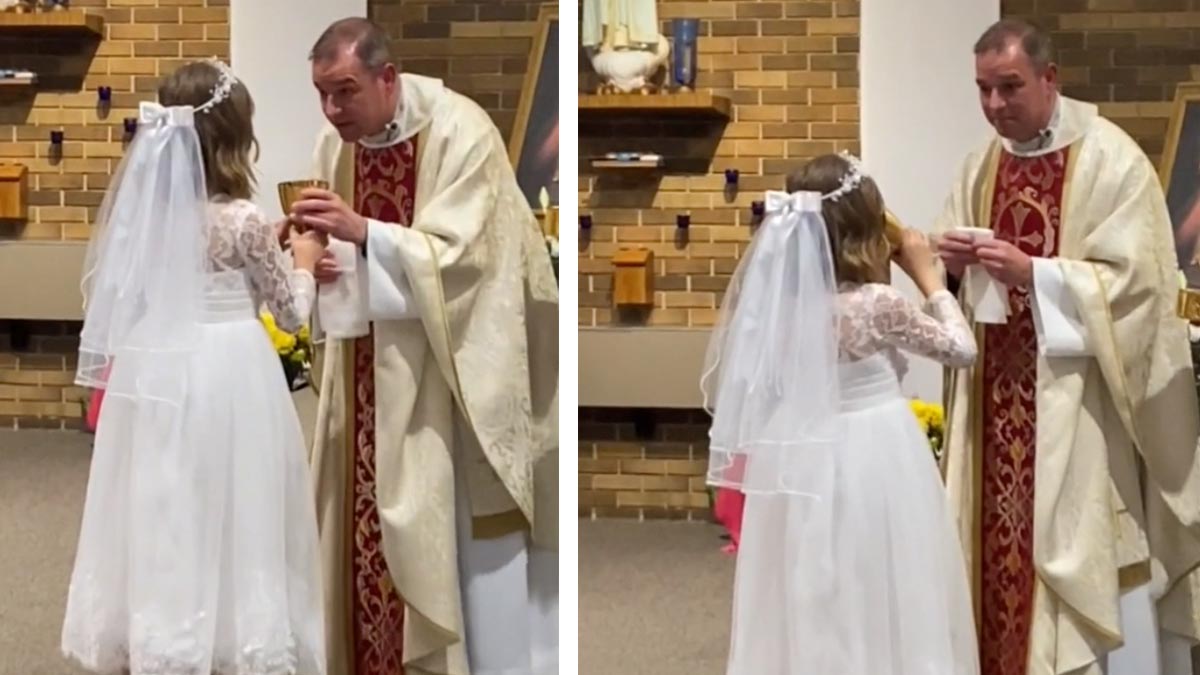 A mother of two couldn’t help but share a hilarious moment from her daughter’s recent First Communion.

Stefanie Heidebrink’s video of her 7-year-old daughter has since amassed more than 10 million views and thousands of comments. Why?

Take a look for yourself.

In the video, 7-year-old Brynley steps up to the altar in a Roman Catholic church to receive the Eucharist, which represents the body and blood of Jesus Christ, for the first time.

Prior to the ceremony, Brynley, who her mom described as “very excited” though “a little nervous” about her big day, asked how much she was supposed to drink from the chalice.

“Tip it until it touches your lips, and then you’re done. You don’t even have to take a sip,” Stefanie said, according to Pigeon 605.

But as soon as the priest said “the blood of Christ” and handed the chalice to Brynley, she took a big swig.

She held it up to her mouth for a solid 10 seconds leaving everyone in church bewildered. Even the priest wasn’t sure what to do.

Stefanie debated recording the moment, but went ahead anyways.

“Thank God, I did,” she said. “She just nonchalantly walks back. The whole church is laughing.”

The mother of two said this isn’t the first time her family had a memorable First Communion. A few years earlier when her son celebrated his, he informed the entire congregation his opinion about the wine.

“After he took his, he announced (to the entire church) the wine tasted worse than Bud Lite Lime,” she said. “That’s my husband’s favorite beer, so I’m sure he’s snuck a sip. And I’m like oh my, God. They’re going to think I’m serving alcohol to my children.”

As for Brynley, Stefanie said her daughter, who was “somewhat embarrassed” was not a fan of the wine. But Stephanie assured her 7-year-old there was nothing to be worried about because that’s exactly how she drinks wine.

Oh my gosh. What a memorable moment for this family!