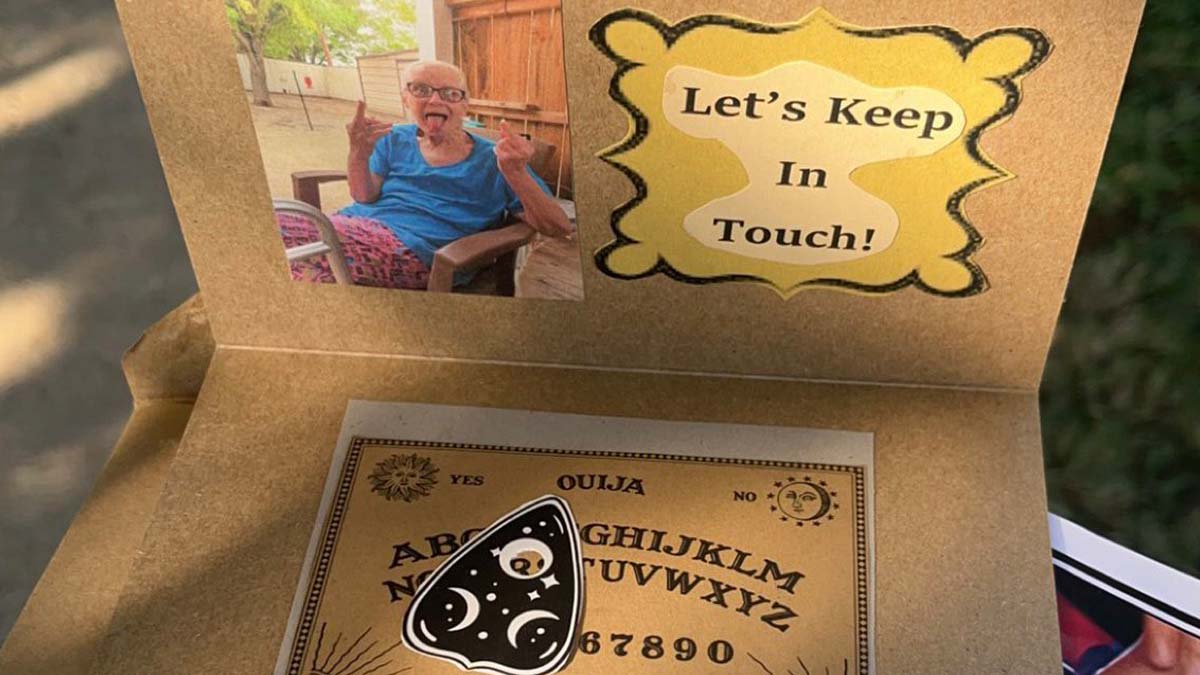 One scary thing about dying is leaving all of our loved ones behind.

When Jo Marie Perryman, or Jodie as many called her, died, she didn’t want to lose touch with her friends and family. So to remedy the situation she left them all with something to use to get in contact with her: a ouija board.

Her 20-year-old granddaughter shared a photo of the gag gift on Twitter, and it instantly went viral.

“She had a quick wit and a clever sense of humor which kept everyone who knew her on their toes,” her obituary read. “It was rare to win a battle of wits with her.”

Her clever sense of humor continued even after death, as cards featuring a photo of the 81-year-old making a crazy face and putting her middle fingers in the air were handed out to loved ones.

As if that wasn’t enough she included a little note, “Let’s keep in touch,” and a ouija board for those who dared contact her.

“It was hysterical,” her granddaughter Gracie Perryman told Today. “And everybody was like, of course, that’s so Jodie of her.”

She said prior to her grandmother’s passing on October 12, Jodie did share something on Facebook that alluded to making a ouija board to hand out at her funeral, but Gracie didn’t think much of it.

It wasn’t until Gracie was at the funeral and she, along with 30-40 other people began opening their letters.

“Everyone was dying, laughing. It was hilarious,” she said, “because that was so her.”

Many responded to Gracie’s tweet about her grandmother calling the letter “amazing” and “this is the stuff of LEGENDS!”

Some even shared similar stories about their loved ones’ last laugh.

Oh my gosh, I love this so much! I want to do something similar for my funeral because I want people to remember the good times they had.