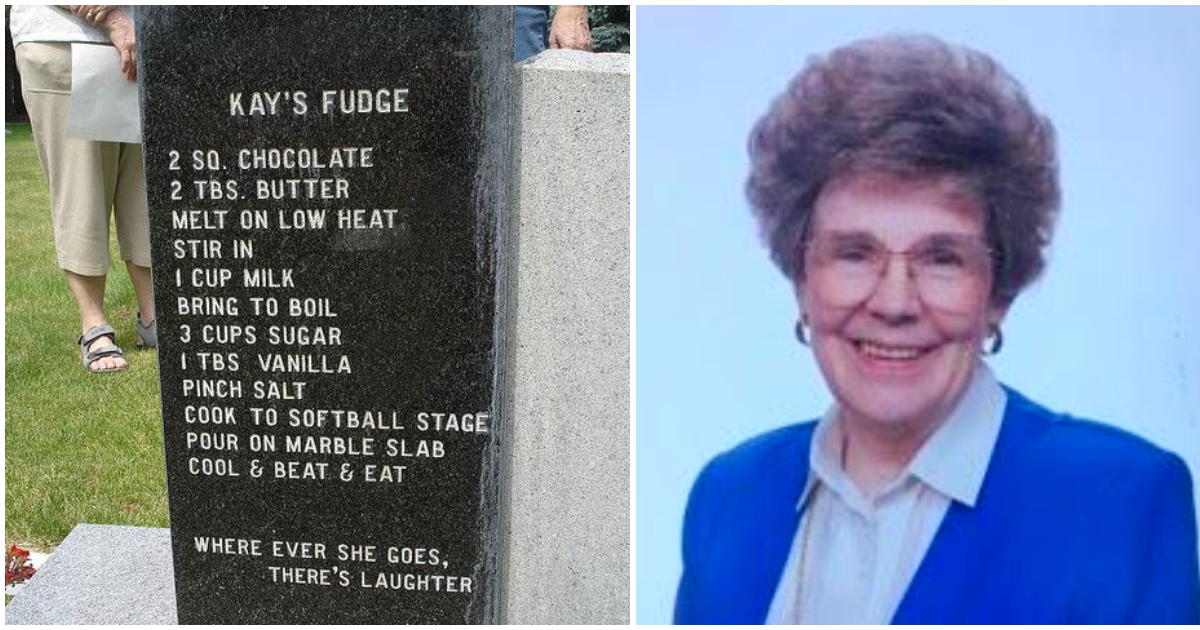 Every grandma has that one special, delicious recipe that they’re known for. Whether it’s lasagna or chocolate chip cookies, there’s nothing like a homemade meal from grandma to give you the warm feeling of home.

And many times, these recipes get passed down through generations — many of us have our grandparent’s old handwritten recipe cards.

But when one elderly woman passed away, she made sure her famous fudge recipe would live on in a very unusual but heartwarming way.

If you pay a visit to Logan Cemetery in Utah, you might just find something very unusual among the more traditional names and dates adorning the gravestones. Look close, and you might find the headstone of Wade and Kathryn Andrews… which feature’s a full recipe for homemade fudge.

It’s quite a sight, one of the more unorthodox but heartwarmingly funny gravemarkers we’ve seen.

Sometimes when a good cook passes away, their favorite recipes are handed out to family to have something to remember them by, but this definitely takes it to the next level, offering Kay’s fudge recipe to anyone who wants it, forever.

The tombstone has in recent years gotten the attention of local mourners, often being shared online. But Utah’s FOX 13 recently revealed the backstory behind the memorable memorial.

The recipe belongs to Kathryn Andrews, who often went by Kay. She died in 2019. Her daughter Janice Johnson told FOX 13 that it was a fitting tribute for her mom.

“She really loved people,” Janice said. “She would write poetry, and she would take fudge whenever people got together.”

She said that Kay helped create the gravestone, and it was her idea to put the fudge recipe on there. (The grave originally included a typo calling for a tablespoon of fudge, which has been corrected.)

But in addition to being an accomplished fudge chef, Kay also left behind a touching wartime love story with her late husband, Wade, with whom she shares the grave site.

Janice told FOX 13 that her parents met at a church event in New York City and hit it off on one date, before Wade, a US Air Force Captain, returned to Europe to continue his service in World War II.

But Kay was still on his mind: he dubbed his bomber plane “Salt Lake Katie,” which featured a pin-up likeness of Kay painted on the side.

They got engaged and married in 1944, and had five kids together. According to Find a Grave, the family moved around the country before settling in Logah, Utah. Wade taught sociology at Utah State University, while Kay worked at the placement center and advised several sororities.

She was always devoted to her family, and her obituary says she was known for her Sunday dinners, where she often cooked mashed potatoes with pot roasts and chocolate Texas sheet cake.

Janice also recalled that her mother would often give out Tootsie Rolls from her purse to kids, and that religious faith was a big part of her life. “She felt like prayer was so important,” she told FOX 13. “She lived by that.”

Wade passed away in 2000, and Kay died on December 17, 2019. But she’d be happy to know that her grave still inspires so much curiosity and joy in so many people — as it says on her grave beneath the recipe, “Where ever she goes, there’s laughter.”

If you are interested in trying out Kay’s now-legendary fudge, here is the full recipe:

What a fun and unique way to honor Kay’s legacy. This is one family recipe that is going to last a long, long time. We’re going to have to try to make this fudge sometime!

Share this “sweet” story if you love this idea!