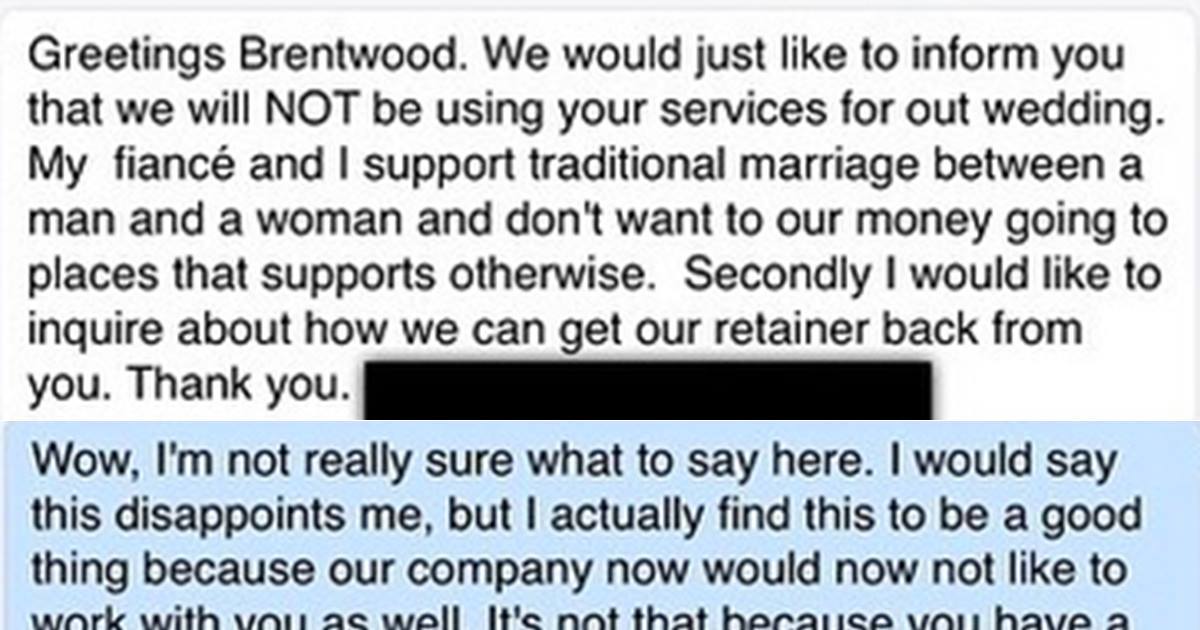 A customer to wedding photographer Clinton Brentwood Lee refused to let him take pictures at their wedding, after Clinton went out and supported same-sex marriage. Now his answer on Facebook is praised by millions of people.

On Friday, the photographer Clinton did like many others: showed his support for the historical decision to allow same-sex marriage nationwide.

He changed his company’s profile picture on Facebook and it was appreciated by a lot of people.

But some of his customers felt angry and upset. One couple, who had hired Clinton for their wedding, said that his services was no longer needed. They wrote a message to him on Facebook:

“Greetings Brentwood. We would just like to inform you that we will NOT be using your services for our wedding. My fiancé and I support traditional marriage between a man and a woman and don’t want our money going to places that support otherwise. Secondly I would like to inquire about how we can get our retainer back from you. Thank you.”

Wow, I’m not really sure what to say here. I would say this disappoints me, but I actually find this to be a good thing because our company would not like to work with you as well. It’s not that because you have a different view from us, but it’s because, since you don’t and support gay marriage, no one else should be able to have it. That’s like me not liking broccoli, and demanding that everyone else in the world should not have broccoli either!

If you’re not in favor of gay marriage that’s fine, don’t marry a woman. Personally, I was taught not to judge others and to love everyone else. So I will try not to judge you here and say anything more as to my opinion of you.

At Brentwood Photography we see love in all forms. Now as far as your retainer goes, I hope you’ll read the first article in the contract you signed stating that this retainer is non-refundable. But don’t you worry, I’m not going to keep it!

Because of this conversation, I have decided to donate your $1500 to GLAD, a group created to help and support gay rights.

So let me be the first to say thank you very much for your donation and support for this great cause!
I couldn’t have done it without your money.
Sincerely and with love,
Brentwood Photography

This is the orignal conversation:

The praises flooded after his answer flooded:

The woman who sent the message to the photographer wanted Clinton to delete his post, but Clinton stood his ground.

A lot of colleauges have reached out to Clinton and said that they are going to follow his lead and take a clearer stand for same-sex marriage. Clinton himself also have a clear message to all the haters and recently he posted this on his Instagram: