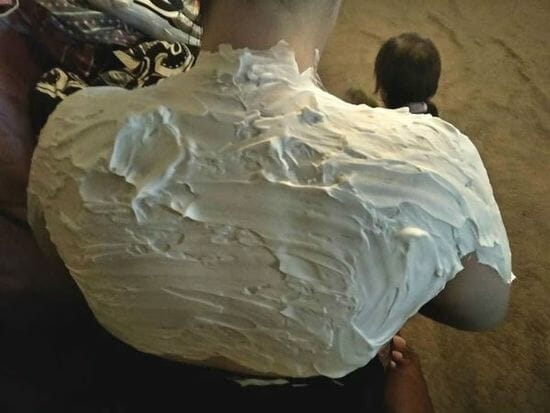 Summer is the favorite time of the year for most people, and for good reason.

Yet, as with most great things, there is a downside to the sun being at the peak of its powers. Anyone who’s ever had sunburn can attest to just how painful and debilitating it can be, and yet it’s so easy, year after year, to allow yourself to sit in the sun for just that little bit too long.

Ointments and moisturisers may work to a point, but is there any actual cure? Well, Cindie Allen-Stewart, a mom of two from Texas, has a treatment that has actually been given the thumbs up from doctors. The best bit about it? It’s a product most people have in their medicine cabinets at home…

Allen-Stewart, like most of us, has had her fair share of sunburns. And so, whilst looking for a way to tackle the symptoms, she came across a common product that works wonders.

One day, recently, she shared the secret with a friend, one who told her that she’d never heard of it before. Allen-Stewart then decided to do a Facebook post – the idea being that more people might benefit from her tip.

As she says: “I recently told a friend about a sunburn treatment that works wonders.”

“She told me she had never heard about it, so I figured I’d make a post because I was sunburned recently.”

The beauty of it is that this is no quirky life-hack that requires a formula or concoction; no complicated mix of ingredients that many of us don’t own. No, it’s a product most people have in their homes already: Foamy menthol shaving cream.

Allen-Stewart swears by the cream, claiming that spreading the foam on a burn usually cures it in just a few hours. This is obviously much faster than the usual alternatives, and the mom says the skin doesn’t peel, as it usually does after a burn.

“I burn, then do shaving cream, and the next day, it’s usually gone,” she explains.

“You don’t want to just put it straight on your back because it’s really cold. You want someone to put it on their hand and rub it on.”

The 34-year-old says that for best results, one should let the foam soak on the affected areas for 30 minutes, before rinsing it off with lukewarm water. If the redness persists for another day, repeat the process.

And, despite this seeming like a social-media tip that experts wouldn’t get behind, dermatologists actually agree.

“If you look at the ingredients of shaving cream, it’s really a great moisturizer,” Dr. Ross Radusky said to Inside Edition.

“It has a lot of coconut oil, coconut butter or derivatives of it. That’s actually what gives it some of its thickness and why you sort of lather it on.”

Doctors do warn, however, that if you have severe burns, or blisters, you should see a medical professional rather than trying to treat it yourself.

There is also the fact that creams can cause acne, especially if left on for more than a few minutes.

Still, it looks to be a pretty solid tip, and one I’m certainly going to try the next time I get sunburn.

Help us spread awareness of this hack by hitting the SHARE button so that all your friends and family on Facebook can reap the benefits too.