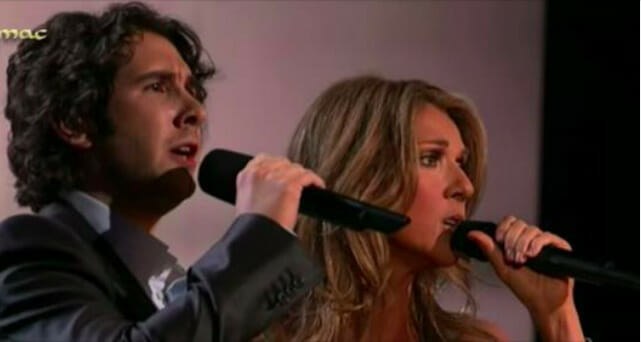 Time goes by and talents evolve. That of Celine Dion has certainly never stopped growing throughout the years, especially when her fame reached its peak following the release of ‘My heart will go on’. The world-wide success of the Titanic soundtrack hit indeed carried Celine into everlasting success.

But prior to this, Celine Dion had already begun a successful career, singing alongside music legends such as Andrea Bocelli. One day in 1999, as she prepared to rehearse by his side, he was nowhere to be found.

In 1999, Celine Dion was to rehearse a duet of “The Prayer” alongside Bocelli. The song had been written especially for them in both English and Italian.

However, Bocelli could not attend the rehearsal — and when Dion saw his replacement, she was immediately nervous.

Before her stood a 17-year-old teenager named Josh Groban — who was clearly nervous to be by her side on stage. Few could suspect that years later, this young man would become a singer and composer with platinum records and a musical producer with over 22 million in sales worldwide.

Nine years later, Celine Dion recounted that story during a live CBS show: “This kid comes on stage, he looks like he’s 12 years old, the cutest thing,” she said. “He’s got this curly hair, eyes like sunshine. He’s so nervous and shaking, and he comes up to me, so sweet.”

Celine admitted being nervous for Josh — she wasn’t sure that he could live up to it. Then, adds Dion, “That kid is here tonight. Ladies and gentlemen, Josh Groban.”

Together, they united to re-interpreted “The Prayer” once again — and this version has been one of the most viewed and shared videos on the internet.

What a show! I don’t know about you, but I got goosebumps watching this. Share if you enjoyed this musical reunion as much as we did!