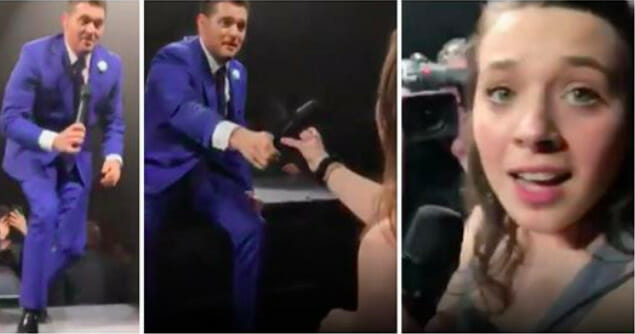 Canadian singer Michael Bublé is famous for his silky smooth voice and charismatic presence on stage. But there’s one more thing the famed artist is become increasingly popular for: asking fans during his performances to join him in song.

He did just that recently at a concert at Madison Square Garden in New York. 21-year-old Erin Bellucci, a junior at the University of Delaware studying music education, recently experienced an unforgettable moment after Bublé beckoned her with his mic.

The 21-year-old was attending the concert with her sister, Allison, when she experienced the life-changing moment.

Erin’s attending the Buble concert in the first place came from a whole string of events. When Erin came home from school for Thanksgiving, her sister informed her that she had a surprise for her.

Allison, who works in public relations, had a client seeking a live singer — and was of course already well aware of her sister’s talents. So she set Erin up to sing at a New York wine bar, the Drunken Horse.

As it turned out, in the crowd was Michael Buble’s executive stylist. After the show, she approached Elin and handed her her business card. She instructed the sisters to email her the week before Michael’s show at Madison Square Garden — so that she could get them tickets to attend.

A long-time Bublé fan, Erin was incredibly excited. Some time later, all went as planned, and Erin not only got to attend Bublé’s show — she ended up in one of the first rows.

Then, when Michael asked the crowd which songs they like to sing in the shower, the sisters got his attention. That’s when Erin told him her favorite shower song: Etta James’ iconic ‘At Last.’

When Michael handed her the microphone, she belted out the tune — and brought the audience to a roar.

Watch her incredible performance in the video below.

What a talented young woman! Share to wish this rising star the best of luck in the future.