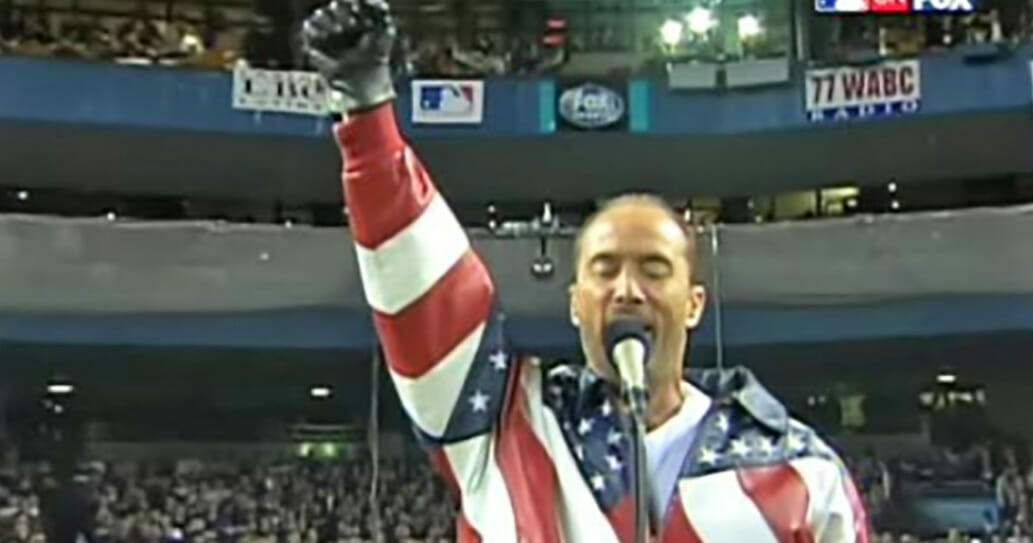 It was one month after the horrific 9/11 terrorist attacks that country music star Lee Greenwood performed this powerful ballad.

Millions of people were moved to tears when he performed his own song “God Bless the USA” during the World Series at Yankee Stadium.

Here we look back on that powerful performance and why we’ll never forget.

Wearing a patriotic jacket California-born Lee Greenwood performs his iconic song in honor of those who lost their lives on September 11, 2001.

We would like to wish Mr. Lee Greenwood a very Happy Birthday! Thank you for your support of Habitat for Humanity Williamson-Maury and our veterans. #leegreenwood #habitatheroes

Posted by Habitat for Humanity Williamson-Maury on Tuesday, 27 October 2015

The song was originally released in 1984 reaching number 7 on the Billboard chart and became popular again during the Gulf war in 1991.

After his chilling performance in 2001, the song reached number 16 on the Billboard Hot 100.

Since then this moving tribute to America has gone double platinum, selling over one million copies in the U.S.

Still get choked up going back and watching Lee Greenwood perform “God Bless The USA” in 2001 at Yankee Stadium for the World Series a month after 9/11. “The flag still stands for freedom and they can’t take that away!” #GodBlessTheUSA pic.twitter.com/080qdYN9sb

The successful singer has had seven number one hits during his impressive career which started in 1962 with his first band The Apollos.

He was signed to the MCA label in 1981 and he made it into the top 20 of the country charts with the single “It Turns me Inside Out,” a song originally written for Kenny Rogers, who turned it down.

Watch Greenwood’s beautiful performance of “God Bless the USA” in the clip below, which is sure to give you goosebumps.