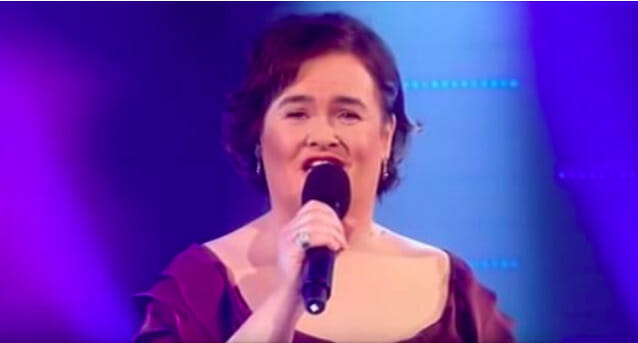 When 57-year-old Susan Boyle made her now-legendary debut on Britain’s Got Talent in April 2009, she left no one unmoved.

She’d long wanted to be as successful as her idol and musical hero Elaine Paige — famous for musicals such as “Evita”, “Sunset Boulevard” and “Chess”.

But every now and then, before she got the chance to show the world what she was actually made of, Susan was practically mocked by the public and even jury members.

So we can only imagine how Susan finally felt… when she got to sing alongside her biggest idol, just a few years later.

Singing with Her Idol

After shocking everyone with her wonderful voice on Britain’s Got Talent, Susan Boyle became an overnight sensation. She has since been recognized for her voice all over the world and has participated in many powerful duets — but if you ask Susan, this performance might be her favorite of all.

In this duet, recorded as part of her show “Susan Boyle – Dreams Can Come True,” she fulfills a lifelong dream: to sing with her hero: the musical star Elaine Paige.

The duet had, according to the Telegraph, been kept secret from Susan Boyle until just shortly before it was time to sing on stage. So you can imagine how thrilled Susan was when the surprise was revealed!

“I never thought I would see myself standing on the same stage with such an icon from West End theatre, let alone singing with her as an equal,” Susan told the Telegraph.

Together, the two songbirds delivered an angelic version of “I Know Him So Well”. And just as you can imagine, the result was magical.

Listen to wonderful Susan Boyle’s duet with her idol Elaine Paige for yourself in the video below:

Susan Boyle truly has an angelic voice and this is just further proof of how talented she is.

Please share this beautiful duet so that everyone has the chance to enjoy it, too!