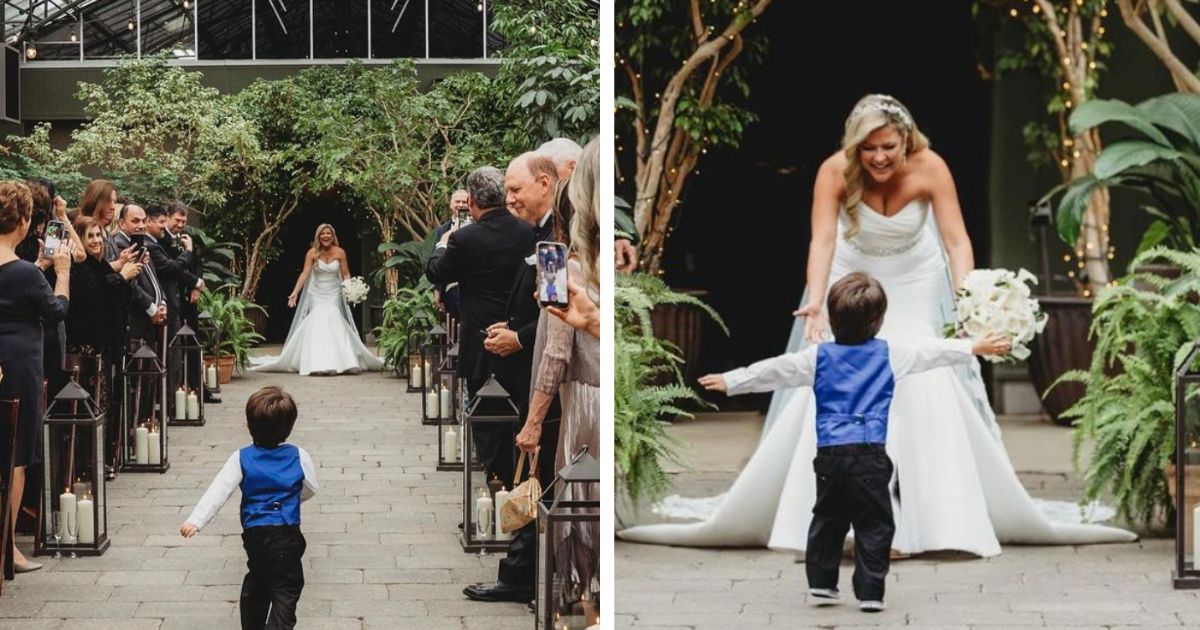 Walking down the aisle to her beloved is the most important moment for any bride. The moments before your walk down the aisle, you usually experience a jumble of emotions.

It is not uncommon for the groom to see his bride coming toward him and shed a few tears because of the immense emotions he feels. But in this story, it wasn’t just the groom who felt intense emotions at seeing the bride…

Kristie Mihelich was all set for her big day, wearing her gorgeous wedding dress and with everything perfectly in place. The Troy, Michigan native has several reasons to remember her wedding day; all of them heartwarming.

Kristie was set to marry Bobby Mihelich on April 22 at the Planterra Conservatory in West Bloomfield, Michigan. The couple had been planning their wedding for a while.

And while you can plan everything down to the last detail, sometimes something just might surprise you. And in this case, the surprise was the couple’s two-year-old son, Pierson.

When the bride appeared at the start of the aisle, it wasn’t only her groom, (who is also Pierson’s dad) getting emotional. The two-year-old saw his mother in her beautiful all-white wedding gown and let out a shout.

He then ran down the aisle towards his mom with his arms spread wide to greet his mother.

“They both see me down at the aisle and their jaws dropped and he said, ‘Huh?’ like he was like, ‘Hi mom!’ and he shook both of his hands vigorously and then he just bolts toward me,” Kristie Mihelich said in an interview later.

Kristie continued, “It was the sweetest thing. I thought that he would just stand there and wait for me but no, he was running to his mommy.”

Her son Pierson, who she lovingly calls ‘Piercy,’ apparently made a lot of people happy since Kristie says the video has been shared countless times, and she has been inundated with dozens of kind messages.

Kristie shared the video with the world because she knows how much people are in need of something positivity in their lives.

She shared in an interview that originally she and her husband had wanted Pierson to be the ring bearer but at the rehearsal dinner, it wasn’t happening because the two-year-old was more interested in running around and being a kid.

Kristie shared that she reminded herself that it doesn’t matter as long as Pierson is present, it would still be special.

She said, “It was just like a dream come true. I mean, I couldn’t have painted a better picture for a perfect day. And literally, it was like a movie.”

And much like a movie, it was all caught on film by her best friend and photographer who is behind Orange Blossoms Photography.

Kristie shared that Pierson has quite a personality and loves showmanship. The two-year-old apparently kept the party going after the ceremony too, because according to his mom he did not leave the dance floor till midnight!

His mother could not be prouder of her son and now viral sensation. As for Pierson’s plans after his viral stardom, he plans on having a great time at his birthday this weekend as the toddler turns 3-years-old!

Luckily, the adorable moment Pierson laid eyes on his mother standing at the start of the aisle was caught on film and immortalized forever.

The love and bond a child shares with their mother is priceless. Share this heartwarming story with your friends and family!