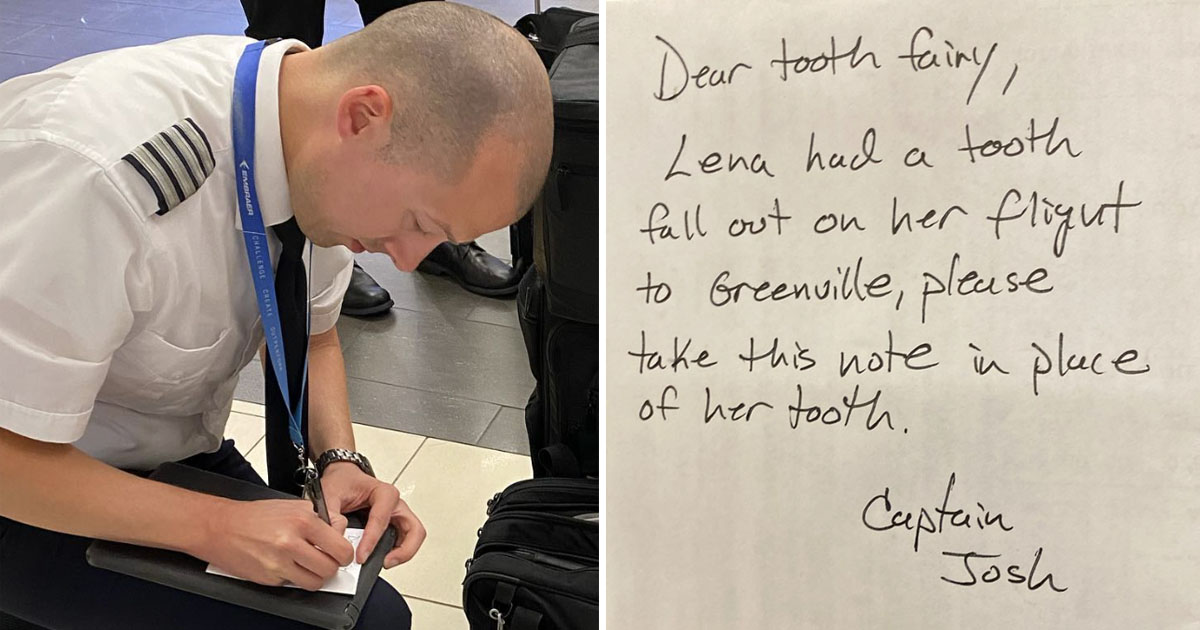 However, this pilot stepped in and saved the day for this little girl…

A mother and daughter were finally almost home after an exhausting 36-hour layover in New York. They were on the final leg of their journey on the way home.

The mother and daughter were traveling home from Norway. 6-year-old Lena was expecting her tooth to fall out. The duo was standing at the baggage carousel in Greenville-Spartanburg International Airport in South Carolina when Lena realized she had lost her tooth.

She panicked and immediately told her mom. “I was sleeping on the airplane. My mom woke me up … and we were going to go pick our suitcases up. And I said, ‘Mommy, mommy, I think my tooth fell out,'” she remembers.

Her mother, Lauren Larmon was not expecting her daughter’s tooth to fall out. The duo tried to go back on the plane to look for the tooth but security had closed by then and they were not able to make it back on the plane.

Little Lena was distraught, her mother said her daughter was “crying” and “very emotional,” because she thought she would never see her tooth again.

That’s when a pilot came in and made everything better! The pilot named, Captain Josh Duchow saw the distraught little girl. He found out she was upset about the fact that she had lost her tooth and had nothing to put under her pillow for the tooth fairy.

Captain Josh presented Lena with a solution. He offered to write a note for the tooth fairy explaining the situation to her.

“Dear Tooth Fairy, Lena had a tooth fall out on her flight to Greenville. Please take this note in place of her tooth.”

He signed the note with his name, “Captain Josh.”

It solved Lena and her mom’s problem immediately and cheered up the little girl. Her mother, Lauren Larmon appreciated the gesture so much that she made a post about it.

The airline confirmed that Captain Josh was indeed the pilot for the flight Lena and her mom were on.

Lena told the media that the tooth fairy even wrote a message back to Lena, “She said, ‘Lena, it is OK that you have lost your tooth on the airplane. I will get it. Keep brushing,'”

She responded back to the tooth fairy as well, “Thank you for not being mad at me. And thank you for all my gifts when I lost my teeth. I love you.”

She also thanked Captain Josh for his help which she believes helped convince the tooth fairy!

What an incredibly sweet story of a young pilot stepping in to make his passenger feel better!

Share this adorable and heartwarming story with your friends and family to make them smile.